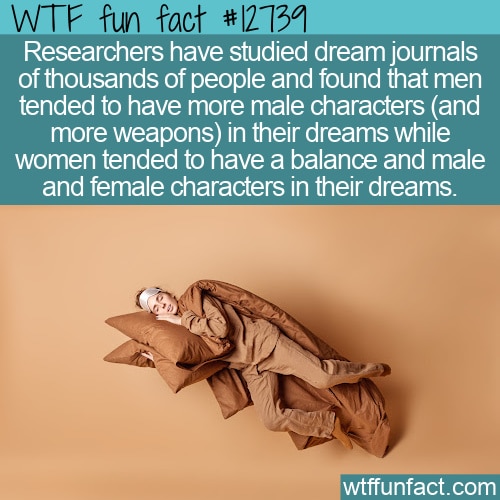 Multiple studies have shown tend to have more male characters in their dreams.

We have very little control over what we dream about, even though many of us try to direct our dreams. (I know I do – if I could spend all night dreaming about being a wealthy villa owner on an abandoned tropical coast instead of reliving a made-up scenario about missing a vital exam and never graduating high school, I would!)

Anyway, there are hundreds of studies on dreams. Most of them involve having people use dream journals where they write down the contents of their dreams any time they awaken. The journals are then processed by a researchers who looks for certain characteristics without knowing anything about the person the journals belong to (that’s why they’re called a “blind judge” in many research papers).

Researchers usually start with common themes and types of characters and count mentions of them. And a lot of the research has backed up the data we’ve collected over time. (However, there are some differences between cultures as to what we dream about.)

For example, G. William Domhoff wrote one of the most widely-cited papers on the genders we dream about (nearly two decades ago, before talking about more than two genders was a cultural priority). It’s called “The Dreams of Men and Women: Patterns of Gender Similarity and Difference,” and it was published in 2005.

In the paper, Domhoff is very clear that “The study of gender similarities and differences in dream content has proven to be a dangerous mine field for dream researchers.” That’s because this kind of information has the “potential to stir up all the tensions that inevitably accompany any discussion of gender in a world where gender discrimination–and conflicts between men and women on many personal issues–are pervasive.”

In other words, it’s likely that a large number of people will dislike this “fun fact” because they somehow feel judged by it or don’t like whatever they think it implies (which is largely nothing).

Demhoff was also careful to not that variations across cultures and across genders make generalizations difficult. He’s just reporting on one characteristic that he found to be statistically significant – the gender of the characters in people’s dreams.

Demhoff concentrated on American subjects since he was most familiar with the cultural characteristics of Americans. But other researchers have studied other cultures and found some key differences.

To make sure everyone is categorizing things in a roughly similar way, Demhoff used a coding system developed in 1966 called the Hall/Van de Castle system, where most things fall into pretty simple categories like: men/women; indoor setting/outdoor setting, etc. But that system was created based on the dream journals of white, middle-class college students at Case Western in the 1950s and 60s. In general, other studies have found these categories useful too.

So, on to the results (because results don’t mean much without some context first!).

What men dream of

Demhoff asked what percentage of dreams had a negative element “such as aggressions, misfortunes, failures, and negative emotions (anger, apprehension, confusion, and sadness)…” And the results were that “men and women are similar in that 80% of men’s dreams and 77% of women’s have at least one of these negative elements.”

When it comes to positive aspects, “such as friendly interactions, good fortune, success, and happiness, 53% of dreams for both men and women have at least one of those elements. Men and women also have an equal number of dreams in which food or eating is mentioned–about 17%.”

But we started with the most reported-on finding, which is that “men dream twice as often about other men as they do about women (67% vs. 33%), and women dream equally about both sexes (48% men, 52% women).”

What’s implied by the dreams of men? Not much

And here’s where people get offended. No one is implying that men fantasize about other men. They can be someone you fight on the street, your 5th grade math teacher, your dad…whatever.

Women may also have more of a character gender balance because their dreams tend to have more characters overall. This may be a result of women’s dreams being longer overall than men’s.

But Demhoff points out that this in not universal. Even among Black Americans, men and women tended to have an equal gender breakdown in dreams. Studies of Mexican and Peruvian teens as well as German college students also showed more of a gender balance. However, in each case there were slightly more men than women in everyone’s dreams.

Source: “The Dreams of Men and Women: Patterns of Gender Similarity and Difference” — G. William Domhoff