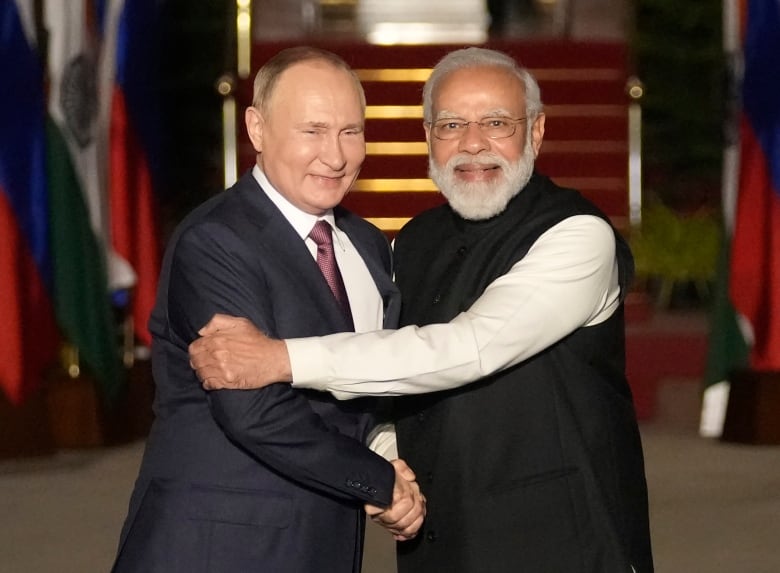 The war in Ukraine will cast its shadow over Prime Minister Justin Trudeau and other Commonwealth national leaders as they arrive in Rwanda, on Wednesday for their first meeting since the onset of the pandemic.

Trudeau touched down in Kigali late in the day as events and forums surrounding the meeting, including sessions on gender equality and the economic leadership of women, began in the heavily guarded capital.

Food security — particularly in Africa — is expected to be a major topic of the leaders’ conference. So is the fact that multiple major countries abstained from a resolution condemning Russia’s invasion of its Eastern European neighbour at the United Nations earlier this year.

In an interview with CBC Radio’s The House, Trudeau said the challenge facing Ukraine’s allies is to engage “in a very, very real and sustained way” with leaders who are skeptical of sanctions to make them “understand that Russia is trying to destabilize the world and set democracy and the rule of law back by decades.”

“It’s important for everyone, not just European countries, that we be standing up to that attempt to redraw the world order,” he added.

While not legally binding, resolutions of the UN General Assembly carry political weight.

Trudeau said there’s an argument to be made to convince India and South Africa — which he said ” pride themselves very much on principles of democracy, principles of territorial integrity, of sovereignty, of a people being able to determine their own future” — to push back against Russia’s war on Ukraine.

It remains to be seen how effective those arguments will be. India, for one, has been buying discounted Russian oil and coal at an increasing rate.

India is the world’s third-largest consumer of oil and over 80 per cent of it is imported. Moscow was not a major supplier of oil to India before the invasion. In January and February of this year, India did not import any crude from Russia at all.

The Commonwealth meeting, Trudeau said, will be an opportunity to remind countries that “they don’t have to make nice with Russia” and to underline the fact that Moscow is the “instigator of all this instability” around the world, particularly regarding food security.

Canada will further attempt to hammer home that message by increasing its diplomatic presence, upgrading the mission in Rwanda to a full embassy with a high commissioner.

Foreign Affairs Minister Melanie Joly described Rwanda as “strategic” within Africa and said it has demonstrated a leadership role on the continent.

Ukraine and (to a lesser extent) Russia are among the biggest suppliers of grain to Africa, where food prices are now soaring.

Russia has tried to blame western sanctions for those price spikes. Trudeau pointed out that the sanctions on Russia do not affect shipments of food and grain.

Much of Ukraine’s grain for export is still stuck in the country because its ports have been sealed off by a Russian naval blockade.

Colin Robertson, a former diplomat and foreign policy expert with the Canadian Global Affairs Institute, said the Commonwealth meeting presents Trudeau with “a real opportunity,” given that some other leaders may be absent and Australia’s recently-elected prime minister is just getting his feet wet on the international stage.

Robertson said he expects to see more substantive discussion at the G7 leaders meeting in Germany, which will take place immediately after the summit in Rwanda.

The Commonwealth, he said, “is a useful forum, but perhaps less useful than it used to be.”

The Queen, the head of the Commonwealth, will be represented at the meeting by Prince Charles. British Prime Minister Boris Johnson is expected to underline the economic advantages of the organization, including the value of preferential trade among members, according to reports in the U.K. media.

Last week, in anticipation of the meeting, Trudeau spoke with Rwanda’s President Paul Kagame. A senior government official, speaking on background, said the prime minister will have more conversations with other leaders heading into the summit.

Trudeau flies to Rwanda as that country’s human rights record is again being called into question.

Human rights groups last week expressed concern about the imprisonment and beating of Rwandan dissidents. A British government plan to deport asylum-seekers to Rwanda has added another factor to those concerns.