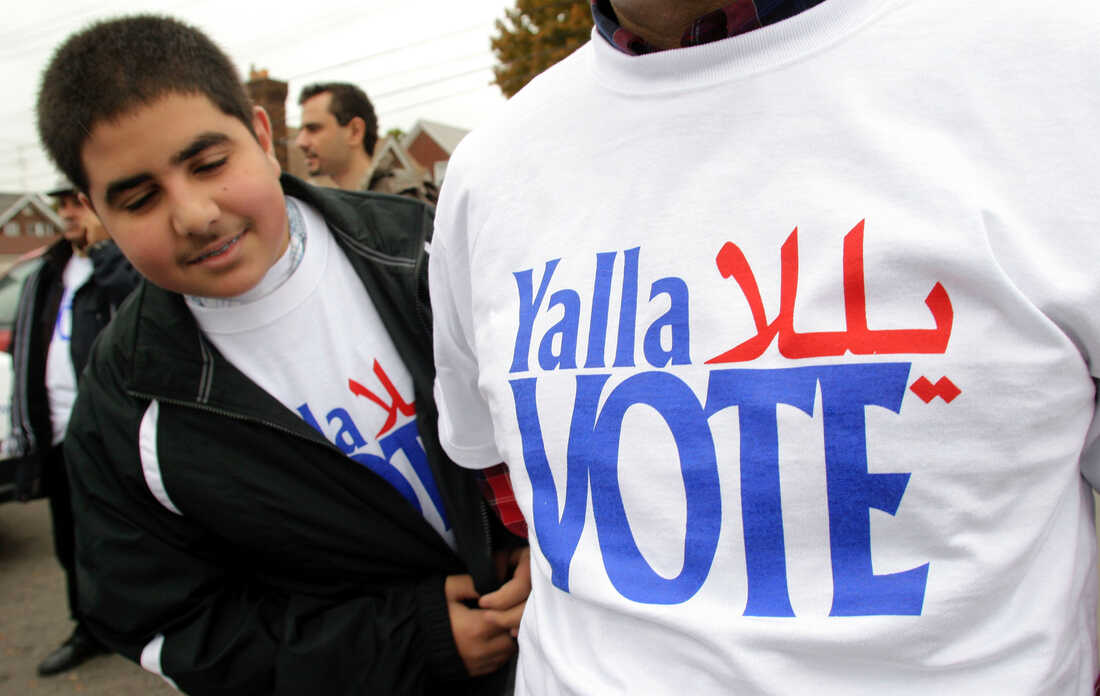 Volunteers take part in a 2004 voter outreach event in Dearborn, Mich., organized by the Arab American Institute. While there is no federal requirement for Arabic-language ballots, the city of Dearborn recently started requiring election materials to be translated into Arabic.

Volunteers take part in a 2004 voter outreach event in Dearborn, Mich., organized by the Arab American Institute. While there is no federal requirement for Arabic-language ballots, the city of Dearborn recently started requiring election materials to be translated into Arabic.

Among the language minority groups protected under the Voting Rights Act, you won’t find voters like Shaima Mohammed.

In 1975, Congress expanded that landmark civil rights law to try to get rid of barriers preventing “citizens of language minorities” from voting. And for close to half a century, Section 203 of the Voting Rights Act has required certain states and local governments to provide voting ballots, registration forms and other election materials in more than just English.

But not all languages are covered by Section 203’s protections.

And that has often left Arabic-speaking U.S. citizens with limited proficiency in English, like Mohammed, on their own when trying to vote. In 2020, she wanted to cast a ballot in the presidential election and turned to a neighbor and a cousin for help.

“Some of the people, they don’t have at home someone to translate,” says Mohammed, who grew up in Yemen and has taken English classes at the Arab Community Center for Economic and Social Services in Dearborn, Mich.

The latest list, released in December, shows that the federal mandate for American Indian language assistance has reached five additional states and coverage for Spanish was added to Ohio’s Cuyahoga County. There’s also growth in the areas required to help voters in Bangladeshi, Chinese, Filipino, Hmong and Vietnamese.

With Arabic, Haitian Creole and other languages that are not protected by Section 203 becoming more common among U.S. households, some voting rights advocates have been calling for the federal government to expand its requirements for multilingual election information.

“Information is power, right?” says Marvin Hernandez, regional manager of Virginia elections for CASA in Action, an advocacy group focused on mobilizing immigrants. “We need to continue fighting for having more languages included in the electoral process as well. This is something that we need to see in order to see inclusiveness in all levels and with all demographics.”

Why Arabic and Haitian Creole speakers are not covered

According to Section 203, the protected language minority groups are limited to “persons who are American Indian, Asian American, Alaskan Natives or of Spanish heritage.”

The Census Bureau relies on data about race and ethnicity as a “proxy” to identify the protected language groups, the agency confirmed to NPR in a statement.

“This means people who speak certain languages such as Arabic are classified by their race” based on federal standards, the bureau said. And those standards officially categorize people with origins in the Middle East or North Africa as white.

Some scholars classify Arabic as an “Afro-Asiatic” language group, but the bureau does not, categorizing it not among Asian languages, but “All other languages.”

As for Haitian Creole — which was at the center of a voting rights lawsuit in Florida’s Miami-Dade County after the 2000 election — the bureau considers it an Indo-European language, and its speakers do not fall within the protected language minority groups under Section 203.

Language minority status was determined with a record of discrimination

When Congress was preparing to add Section 203’s language assistance requirements to the Voting Rights Act, some lawmakers did consider a wider scope of coverage.

“One of the arguments actually that was made is that every language should be eligible for coverage. And there were serious concerns about that because it would raise constitutional issues,” says Jim Tucker, a voting rights attorney with the Lawyers’ Committee for Civil Rights Under Law who wrote about Section 203’s history in the book The Battle Over Bilingual Ballots: Language Minorities and Political Access Under the Voting Rights Act.

Adopted during Reconstruction after the Civil War, the Fourteenth and Fifteenth Amendments give Congress the power to pass laws that would ensure every person is treated equally by the law and that no citizen is denied the right to vote because of their race.

Ultimately, lawmakers decided that Section 203 would only require language assistance in federal, state and local elections for groups for which there is a historical record of evidence showing they’ve faced voting and educational discrimination. The goal was to address, as the legislation puts it, “the unequal educational opportunities afforded them resulting in high illiteracy and low voting participation.”

Angelo Ancheta, a civil rights attorney who has also written about Section 203, notes that any discussions about broadening the language minority groups protected under this unfunded federal mandate would have to contend with practical considerations.

“It’s not cheap to produce ballots in other languages,” Ancheta says. “There are a lot of logistical issues. We can’t ignore those.”

There have been opportunities over the years for Congress to expand the protected language groups when Section 203 — which is currently set to expire in 2032 — has come up for renewal.

The failed Senate efforts to pass new voting rights bills earlier this year included proposals that could have helped ensure oral assistance in non-written American Indian and Alaska Native languages. (Neither bill would have expanded the federally protected language minority groups to include Arabic or Haitian Creole speakers.)

But no new federal requirements have been passed — and Ancheta does not expect to see any in the near future.

“I suspect that this kind of issue is one where polarization in Congress is not going to be helpful to advancing any new legislation,” Ancheta says.

There are local efforts to provide more multilingual ballots

While there are federal requirements for language assistance, Tucker warns that voters have found a range of compliance among state and local governments around the country.

“There are many that do not even meet the requirements,” says Tucker, who has served in the voting section of the Justice Department’s Civil Rights Division and currently chairs a committee of outside advisers to the Census Bureau. “There are jurisdictions in some cases that go above and beyond the requirements.”

According to local law in Florida’s Miami-Dade County, precincts with significant shares of Haitian American voters are required to offer ballots in Haitian Creole, in addition to English and Spanish.

In Florida’s Miami-Dade County, home to the largest population of immigrants from Haiti in the U.S., precincts with significant shares of Haitian American voters are required to provide ballots in Creole, in addition to English and the federally required Spanish.

“It’s a good thing that in Miami-Dade County, that’s a fact. But that’s not the case in many other jurisdictions,” says Gepsie Metellus, co-founder and executive director of the Sant La Haitian Neighborhood Center in North Miami, Fla.

“It’s an invitation to vote. It’s an embrace, a recognition that that population is part of the American fabric,” adds Metellus, who ran unsuccessfully in 2020 for a seat on the Miami-Dade County Commission.

Voting rights advocates in Michigan, where some of the country’s biggest Arab American communities have lived for decades, have been organizing for more official recognition of the needs of Arabic-speaking citizens.

“When we explained to them that they can vote early, that they didn’t need a driver’s license to vote — they had no idea. And that is all due to language barriers,” says Nada Al-Hanooti, executive director of Emgage’s Michigan chapter, about her advocacy group’s outreach efforts with citizens who are not proficient in English.

For the upcoming primary election in August, ballots in Arabic will be available to voters in Dearborn, Mich., after a push by community groups and a city council member, Mustapha Hammoud, who introduced a resolution earlier this year that requires election materials in English and any language spoken by at least 10,000 or 5% of Dearborn’s residents. In Hamtramck, Mich., another suburb of Detroit, city council members have also recently passed a resolution for Arabic election materials.

For Mohammed — the Arabic-speaking voter in Dearborn who turned to friends and family for help to get access to an English-language ballot in 2020 — it will be a major change that makes it easier to exercise her right to vote.

“It’s a good feeling,” Mohammed says about casting a ballot. “You feel like you’re a part of this country. You’re doing something good.”