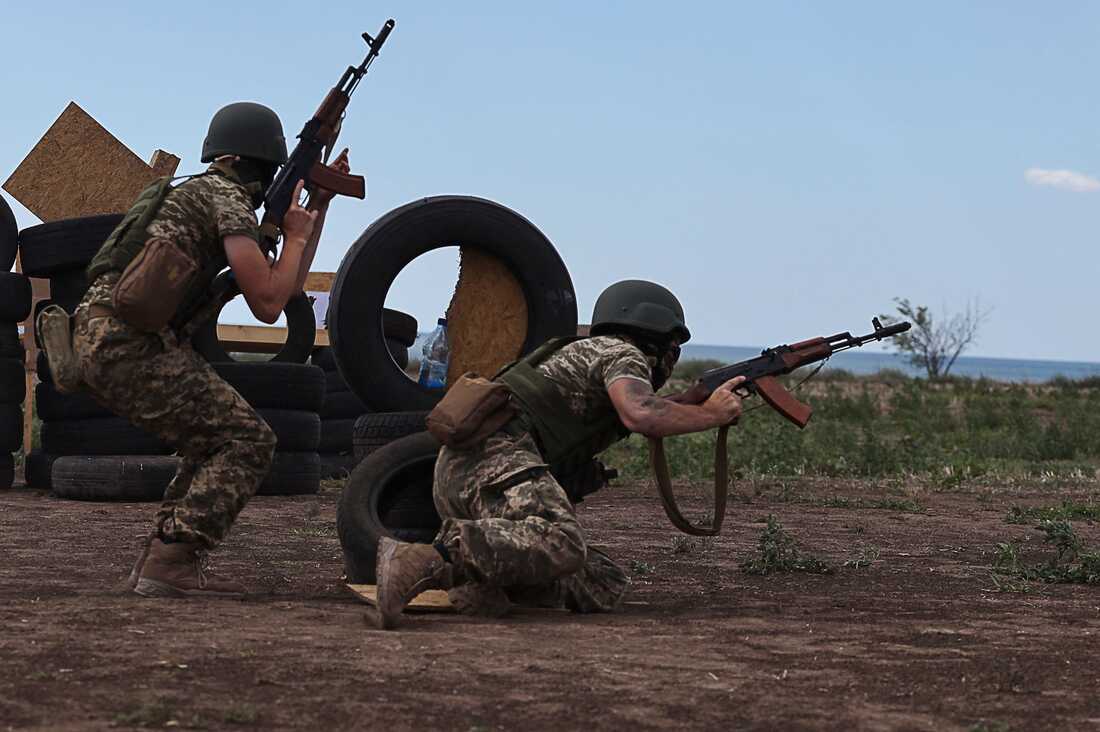 Service members of the 126th Separate Territorial Brigade of the Armed Forces of Ukraine take part in military exercises in the Odesa region on Wednesday.

Service members of the 126th Separate Territorial Brigade of the Armed Forces of Ukraine take part in military exercises in the Odesa region on Wednesday.

As Wednesday draws to a close in Kyiv and in Moscow, here are the key developments of the day:

The most intense battles in Ukraine are still taking place in the east, but fighting has been picking up in the north and south of the country as well. Ukraine’s military says it carried out strikes against Russian positions on Snake Island, an outpost in the Black Sea, suggesting the use of longer-range weapons recently provided by Western countries. In northern Ukraine, Russia has stepped up shelling of Kharkiv, the country’s second-largest city, where Ukrainian officials say long-range Russian shelling has killed at least 15 civilians this week. Ukraine pushed back Russian troops from the outskirts of the city more than a month ago.

Ukrainian officials are gearing up to receive candidate status for the European Union. In their latest comments, Ukrainian leaders including President Volodymyr Zelenskyy said they expected unanimous support of all EU members for Ukraine to be put on the lengthy path toward potential membership in the bloc. An EU summit begins in Brussels on Thursday.

The Kremlin threatened to retaliate against Lithuania for blocking some goods headed to Kaliningrad, a Russian exclave on the Baltic Sea. A Russian Foreign Ministry spokesperson said the retaliation wouldn’t be diplomatic but practical, raising fears of a confrontation between Russia and NATO. Kaliningrad is a part of Russia that’s surrounded by Lithuania and Poland — both NATO and EU members. Lithuania said it was banning the movement of goods like steel and other metals to the Russian territory as part of EU sanctions over Russia’s invasion of Ukraine.

Russia commemorated the 81st anniversary of the Nazi invasion of the Soviet Union in World War II. Activists held candle-lighting ceremonies across the country and, according to Russian RIA new agency, also in the occupied Ukrainian city of Mariupol. President Vladimir Putin laid a wreath at the Tomb of the Unknown Soldier near the Kremlin in honor of the estimated 27 million Soviets killed in what Russia calls the Great Patriotic War. Russia’s invasion of Ukraine has created the largest refugee crisis since that time.

Microsoft reported that Russian state-backed hackers have targeted organizations in 42 countries allied with Ukraine. The report identified the U.S. as the top target, followed by Poland, a key logistics hub for aid to Ukraine. Hackers succeeded at infiltrating networks 29% of the time, and at least a quarter of those intrusions resulted in stolen data. Microsoft said the key targets were governments, but also included think tanks, humanitarian groups, IT companies, and energy and other critical infrastructure suppliers.

Why volunteer grave diggers in Ukraine are exhuming Russia’s dead: Listen to this story.

Ukrainian museum director reflects on art as memory and why it must be saved: Hear the conversation on NPR’s Here & Now.

As war drags on in Ukraine, is it time to talk compromise? WBUR’s On Point examines the prospects.

Russia’s war in Ukraine is changing the world: See its ripple effects in all corners of the globe.

You can read more daily recaps here. For context and more in-depth stories, you can find more of NPR’s coverage here. Also, listen and subscribe to NPR’s State of Ukraine podcast for updates throughout the day.