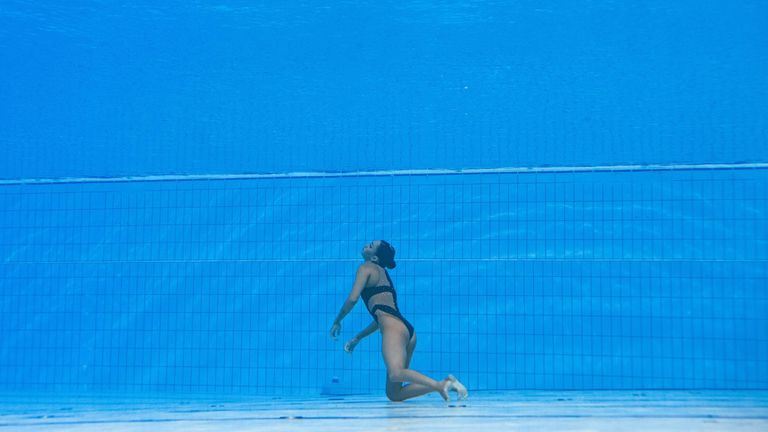 A professional US synchronised swimmer fainted mid-routine at the World Championships and had to be rescued by her coach after sinking to the bottom of the pool.

Anita Alvarez, 25, lost consciousness as she competed in the final of the women’s solo free event in Budapest on Wednesday.

Her coach Andrea Fuentes rushed to her aid, diving into the water and pulling her back to the surface with the help of a man.

Ms Fuentes said she is “ok and the doctors also said she is fine” in a statement on Instagram.

“Anita’s solo was so good too, it was her best performance ever, she just pushed through her limits and she found them,” she wrote.

“We all know it happens in other sports: cycling, marathon, track and field… some don’t make it to the final line and some even finish crawling or passing out.

“Our sport is very hard too. Now it’s time to rest and recover.”

In a statement on US Artistic Swimming’s Instagram page, Ms Fuentes said Alvarez would be assessed by doctors on Thursday before a decision was made on her competing in Friday’s team event.

It is not the first time the Team USA swimmer has fainted in the pool.

Last year Alvarez lost consciousness during an Olympic qualifying event in Barcelona, where Ms Fuentes also rescued her and she eventually finished seventh.

Following Wednesday’s incident in Budapest, the coach told reporters it was a “big scare” as it appeared Alvarez had stopped breathing.

She told Spanish radio: “It felt like a whole hour. I said things weren’t right, I was shouting at the lifeguards to get into the water, but they didn’t catch what I said or they didn’t understand.

“She wasn’t breathing. I went as quickly as I could, as if it were an Olympic final.”

Her teammates looked visibly distressed as they watched the incident unfold.