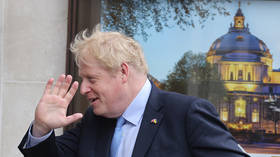 Traces of the virus causing poliomyelitis have been found in sewage samples in north and east London, the UK Health Security Agency (UKHSA) said on Wednesday. The authorities believe the virus was derived from a live vaccine still used in some countries and brought to the UK by a traveler from abroad. While no incidents of community spread have yet been found, health officials warn that it is “likely.”

The virus was identified as vaccine-derived poliovirus type 2 (VDPV2) and was detected several times between February and May at the London Beckton Sewage Treatment Works in Newham.

UKHSA officials say the virus samples are “closely related” but from different people, and that the virus has mutated twice already, suggesting community spread.

Health officials are trying to locate individuals who may have been infected and say the overall risk to the public is “extremely low.”

Britain was officially declared polio-free in 2003, but visitors from abroad sometimes carry the virus. If community spread is detected, it would be the first domestic polio infection in the UK since 1984.


British children normally take three doses of the polio vaccine at an early age. While the national vaccination rate is over 92%, London lags behind with just under 87%, however. The oral vaccine still used in some countries where the disease has not been fully eradicated might be the culprit in this case, with a traveler “shedding” the weakened virus.

Two out of three strains of “wild” polio have been eradicated across much of the world thanks to an aggressive vaccination campaign. The last case of Type 2 was detected in 1999, and the last instance of Type 3 was in 2012. However, Type 1 wild polio remains endemic in Afghanistan and Pakistan.

Poliovirus can spread through droplets or direct contact with feces-contaminated surfaces. Most of the people infected show no symptoms, with about 25% manifesting flu-like aches and pains. About one to five in 1,000 can develop more serious symptoms, as the virus attacks the brain and the spinal cord. In a small number of cases, the virus affects the muscles, leading to paralysis and permanent disability – or death, in the cases where muscles that help people breathe are affected.