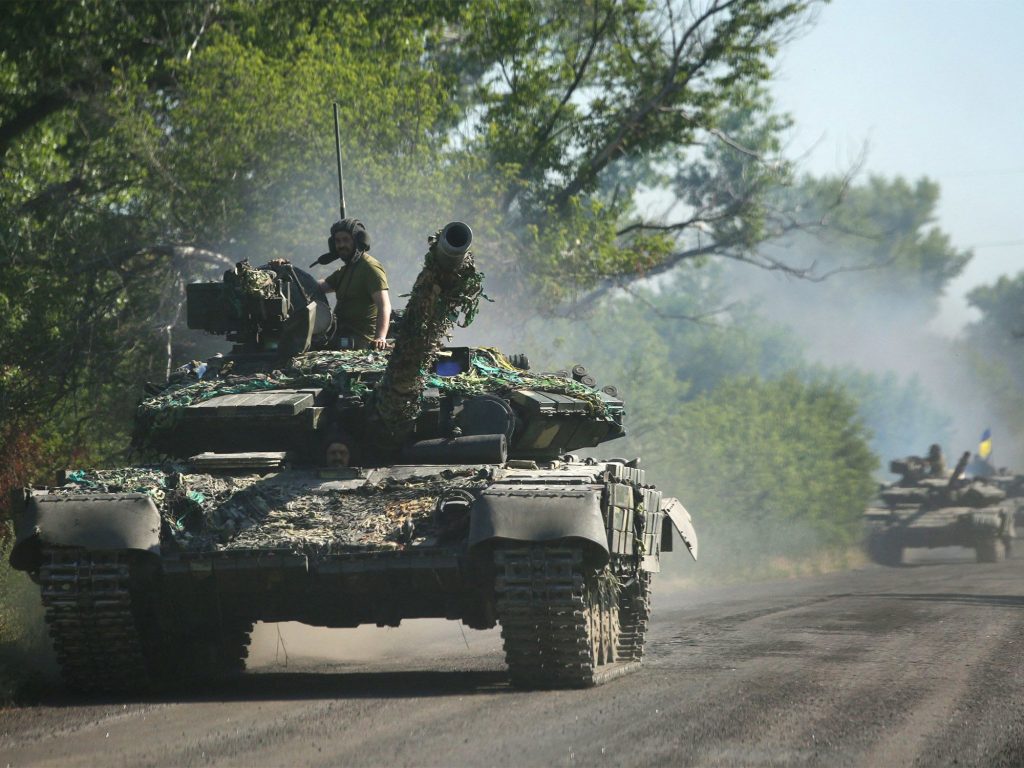 A local official in Luhansk said the Ukrainian army would pull out of Sievierodonetsk, the region’s administrative center, as the Russian offensive in the east continued to advance four months after the invasion started.

The US plans to provide Ukraine with an additional $450 million in aid and advanced weaponry that includes rocket systems.

The Kremlin called Ukraine’s bid to become a member of the European Union an internal issue for the bloc.

On the Ground
Ukrainian troops are withdrawing from Sievierodonetsk, while Russian forces made some progress in their push toward Lysychansk, the last major holdout in the Luhansk region that Kyiv still controls, local governor Serhiy Haiday said in a television interview.

After its initial attempt to capture Kyiv failed, the Kremlin has refocused its campaign on Ukraine’s east and has been making steady progress in the Donbas. Russia is demining the Azov Sea port of Berdyansk, according to the Ukrainian military.

EU leaders on Thursday approved a recommendation from the European Commission to grant candidate status to Ukraine and Moldova, although the membership process can last more than a decade.

Survey Sees Ukraine’s Economy Contracting 35% This Year (10:58 a.m.)
The Ukrainian economy will contract 35% in 2022, compared with a previous forecast of a 22.5% decline, according to the results of a Bloomberg News survey of nine economists conducted from June 17 to 22.

Germany Fears Russia Could Permanently Close Nord Stream (9:51 a.m.)
German Economy Minister Robert Habeck said he fears Russia may keep a key gas pipeline closed even after planned maintenance next month is completed, raising the prospect of a fresh surge in prices and rationing this winter.

Habeck’s concerns were echoed by Klaus Mueller, the head of the federal network agency, who said that flows through the Nord Stream 1 link might not restart after a 10-day maintenance period beginning on July 11.

Nord Stream is the main pipeline bringing gas from Russia to Europe’s largest economy, which depends on the country for more than a third of its supplies.

US Adds Another $450 Million in Weapons, Aid (10:06 p.m.)
The US announcement of another $450 million in advanced weaponry and aid to Ukraine is the latest tranche in what has become a multibillion-dollar effort to push back Russia’s invasion.

The move comes just weeks after President Joe Biden announced $1 billion in new weapons and support, including high-technology rocket systems meant to allow Ukraine to hit Russian targets from as far as 80 kilometers (50 miles) away. After required training for Ukraine’s military, some of those weapons are now flowing into the country.

Zelenskiy Looking to Replace Top Spy, Politico Says (9:51 p.m.)
President Volodymyr Zelenskiy is looking to replace top intelligence official Ivan Bakanov over perceived failures on the job, Politico reported citing four unidentified officials close to the Ukrainian leader and a Western diplomat who has advised Kyiv. Zelenskiy is looking for someone more suitable to serve as the wartime chief of the Security Service of Ukraine, Politico reported them as saying.

Politico said Zelenskiy’s office and Bakanov didn’t respond to its requests for comment. Bakanov has been close to Zelenskiy since his days as an entertainer.

Leaders Hail Move on Ukraine’s EU Candidacy as Historic (9:40 p.m.)
Leaders including Zelenskiy and France’s Emmanuel Macron applauded the decision by EU heads to grant Kyiv candidate status on the path to membership of the bloc.

Zelenskiy hailed the move as “a unique and historical moment.” Macron said the decision mirrors the EU’s response since Russia invaded Ukraine, “which means reacting in a fast, historic and united way through sanctions, macroeconomic, military and financial support.”

Ursula von der Leyen, head of the European Commission, said she was convinced Ukraine would move ahead as swiftly as possible with reform needed to join the EU. Kyiv, which applied for membership shortly after the Russian invasion in February, will have to meet conditions in the future on issues related to the rule of law, justice and anti-corruption.