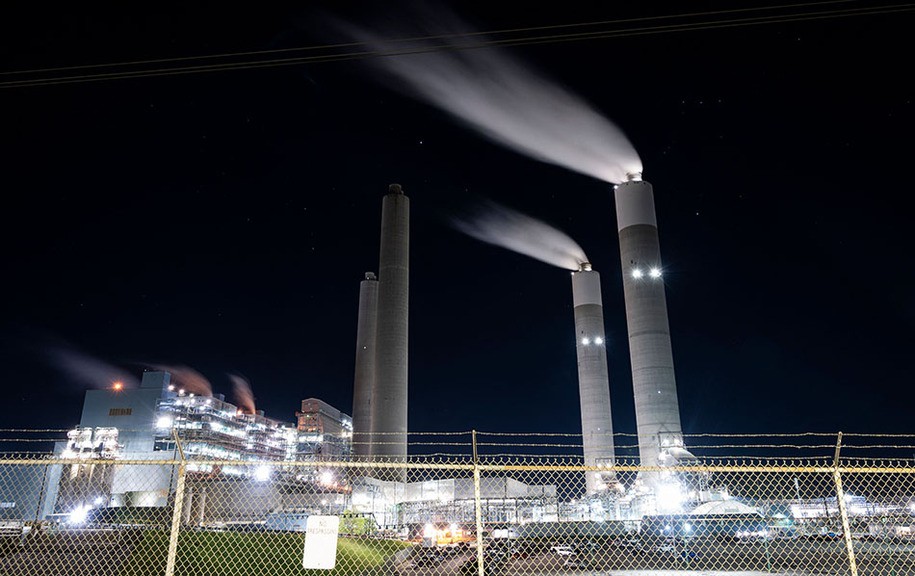 The case, West Virginia v. Environmental Protection Agency, is the product of a coordinated, multiyear strategy by Republican attorneys general, conservative legal activists and their funders, several with ties to the oil and coal industries, to use the judicial system to rewrite environmental law, weakening the executive branch’s ability to tackle global warming.

As Davenport notes, the ramifications of this particular pending decision are literally catastrophic in scope.

Those limitations on climate action in the United States, which has pumped more planet-warming gases into the atmosphere than any other nation, would quite likely doom the world’s goal of cutting enough emissions to keep the planet from heating up more than an average of 1.5 degrees Celsius compared with the preindustrial age. That is the threshold beyond which scientists say the likelihood of catastrophic hurricanes, drought, heat waves and wildfires significantly increases. The Earth has already warmed an average of 1.1 degrees Celsius.

To properly appreciate the “coordinated, multiyear” strategy of which the West Virginia v. EPA matter case (actually four cases consolidated together) is an example, it is necessary to understand how the current Supreme Court’s monolithic conservative majority has been fashioned, and by whom. The organization responsible for selecting almost every judicial nominee recommended or confirmed by the Republican Party, including the 241 federal judges confirmed during the Trump administration, is the Federalist Society, a sprawling and enormously influential organization whose mission (in addition to its practical function of normalizing and propagating an alternative, corporate-friendly conservative “jurisprudence”) is to remake the judiciary into a tool to benefit the business interests of a small class of extremely wealthy donors, predominantly (but not entirely) from the fossil fuel industry.

The products of this effort—Justices Roberts, Gorsuch, Kavanaugh, Alito, and Barrett—now ensconced in the court along with Thomas, a fellow right-wing justice from a prior era, are now in a position to rule on the issue most dear to their patrons’ hearts and desires: the ability of the U.S. government to regulate the enormous toxic chemical, carbon dioxide, and other pollutant emissions caused by the drilling, mining, refining, and use of their products.

That is why, as Davenport reports, there are now multiple cases brought by Republican attorneys general—each case specifically designed to promote radical and new interpretations of existing law—winding their way through the federal system, with the end goal of being decided by the Supreme Court’s conservative majority (a majority that is now—as the leaked Dobbs opinion illustrates—wholly unaccountable to existing precedent). As Davenport notes: “Coming up through the federal courts are more climate cases, some featuring novel legal arguments, each carefully selected for its potential to block the government’s ability to regulate industries and businesses that produce greenhouse gases.”

In other words, many of these cases, shepherded under the guidance of the fossil fuel industry, do not simply challenge environmental regulations, but deliberately challenge the ability of the executive branch (through its federal agencies) to regulate them at all. As the Trump administration amply demonstrated, when Republicans control the executive branch they address this by altering the missions of the agencies themselves (by staffing them with industry loyalists and weakening existing rules through administrative fiat). Democratic administrations, on the other hand, present a problem for such industries because Democrats actively seek to enforce environmental protection on behalf of the American people. The ultimate intent by the fossil fuel lobby, therefore, is to permanently curtail the existing power of federal agencies to impose regulations, specifically ones that target pollution and thereby cut into industry profits.

The biggest target of these lawsuits are actions by the EPA to combat climate change, such as regulating tailpipe emissions, requiring economic analyses by industry of adverse climatic effects of their industries and requiring the transition to renewable or non-CO2 producing energy sources. So fossil fuel conglomerates, with their ready stable of highly paid “environmental” lawyers, have road-tested an argument that attacks established precedent deferring to an individual agency’s judgment as to what its own regulations mean as “overreach,” and seeks to redefine the relationship between the very branches of our government in accordance with manufactured conservative dogma that holds such regulation should be the province not of the executive, but of Congress.

The plaintiffs want to hem in what they call the administrative state, the E.P.A. and other federal agencies that set rules and regulations that affect the American economy. That should be the role of Congress, which is more accountable to voters, said Jeff Landry, the Louisiana attorney general and one of the leaders of the Republican group bringing the lawsuits.

By maligning the function of the EPA as a the tool of a sinister “administrative state,” these cases—brought by Republican attorneys general who, as Davenport’s article clearly shows, owe their political positions to “dark money” campaigns largely funded by Koch industries and other fossil fuel companies—speciously urge that Congress and not the EPA should be responsible for such complex regulations. But the prospect of tasking members of Congress to actually develop and promulgate intricate rules governing the regulation of chemicals and pollutants, or carbon dioxide and carbon emission technology, for example, is not simply laughable but preposterous.

As Davenport explains, “for decades [Congress] has delegated authority to the agencies because it lacks the expertise possessed by the specialists who write complicated rules and regulations and who can respond quickly to changing science, particularly when Capitol Hill is gridlocked.” And assuming that congressmen and women had the knowledge, time, and wherewithal to craft such regulations—which they emphatically do not—one only has to imagine how a Marjorie Taylor Greene or Paul Gosar would respond to such a task, if they would respond to it at all.

As outlined by senior correspondent and legal analyst Ian Milhiser, writing for Vox, the cases currently before the court address the EPA’s authority to interpret and implement the Clean Air Act in conjunction with the Obama administration’s Clean Power Plan, now a completely moot exercise since that plan was never put into place, having been stayed prior to its implementation by industry legal challenges. The court could have refused to hear the cases on that ground alone, but a newly empowered conservative majority now apparently sees its chance to permanently alter the very relationship between the executive, traditionally responsible for implementation of policies that ensure broad-based acts of Congress are enforced, and the rest of the federal government.

As Milhiser explains, in addition to arguing that the Clean Air Act itself should be weakened, and in addition to challenging the EPA’s constitutional authority to implement it, the petitioners in the cases now before the court also argue in essence that the entire phalanx of federal agencies addressing environmental protection, workplace protection, even access to birth control and health care should be curtailed. If the court accepts their arguments at face value, as Milhiser explains, the hope of any serious regulation against environmental pollution—let alone the climatic effects of unchecked greenhouse gas emissions—will become a distant memory: “the United States will be a very different place if the Court’s right flank gets its way in West Virginia.”

In the worst-case scenario for the Biden administration, the West Virginia case could make President Joe Biden the weakest president of the United States in over 80 years, and it could give a Supreme Court dominated by Republican appointees a veto power over huge swaths of federal policy.

The core argument by conservatives in these cases is that the EPA has no right to determine what the “best type of emission system” is under the Clean Air Act to reduce the greenhouse gases (predominantly CO2) that indisputably contribute to global warming and climate change. The Obama administration’s Clean Power Plan required polluting industries such as coal-fired power plants to move away from technologies that failed to accomplish the goal of reducing emissions. The Trump administration attempted to replace the Clean Power Plan with a drastically weakened regulation called the “Affordable Clean Energy Rule,” which may have actually resulted in increased carbon emissions; that rule was struck down by a federal appeals court, setting up the challenge exemplified by the West Virginia v. EPA consolidated cases, now before the court.

These cases, all brought by Republican attorneys general doing the bidding of the fossil fuel industry, argue that the Clean Power Plan should be stricken in its entirety, even though there is no rule or regulation currently in place from it. And that is where the significance of the court’s decision to even hear this case lies.

Under the Clean Air Act, and under most pieces of wide-ranging litigation passed by Congress, the power to implement and enforce rules necessary to satisfy the provisions of the act in question is necessarily delegated to the executive, through its federal agencies. The Supreme Court in a landmark case called Chevron v. NRDC, for example, unanimously affirmed the general rule that deference should be given to an agency’s construction of a statute it is tasked to administer, explicitly recognizing the need for Congress to delegate such complex matters.

But this is a far different court, one seemingly bent on deconstructing for its benefactors and backers any legal principle that inures to the benefit of the American people as opposed to corporate interests, one willing and even eager to employ drastic and reactionary legal theories to achieve that end.

The reactionaries appointed to the court by Donald Trump have, unsurprisingly, signaled their receptiveness to such theories, which is one of the reasons these cases are now finding a hearing. Just as they were undeterred by prior precedent as evidenced in the leaked Dobbs opinion, the court’s conservative wing sees itself as accountable to no one but their donor base. Justice Neil Gorsuch, for example, has strongly come out in favor of a principle called the “non-delegability” doctrine—a legal theory that hadn’t reared its head since the time of the New Deal—that suddenly has become viable again in the service of a court that routinely places business interests over those of ordinary American citizens.

As Milhiser explains, Gorsuch’s formulation would transfer power from Congress and executive to the courts—and not coincidentally, to himself and his conservative colleagues—to explain what a vaguely or ambiguously written law actually means. As Milhiser notes, Justice Clarence Thomas has gone even further, suggesting that no delegation by Congress is permissible, and that an agency simply cannot issue binding rules, an extreme and rather monstrous view that would automatically render the vast majority of consumer, worker safety, and environmental protection laws invalid.

It should be emphasized that none of these reactionary approaches are the product of precedent, which is supposed to be the guiding principle for this court and all the lower courts. Rather, they are all the products of a deliberately distorted and carefully contrived “jurisprudence” whose notions and goals are purely political in their origins.

It’s not clear what route the court will choose, and it won’t be clear until the opinion is issued. As Davenport’s article observes, hamstringing or eliminating the ability of the EPA to regulate toxic and carbon emissions spells doom for the climate, and condemns us all to live with the consequences. But if the draft Dobbs opinion is any indicator, this court does not care one whit about the human consequences of its actions. It is a court entirely driven by ideology, and if that means the planet and the human race must suffer horribly as a consequence, that is a sacrifice its members are quite willing to make.