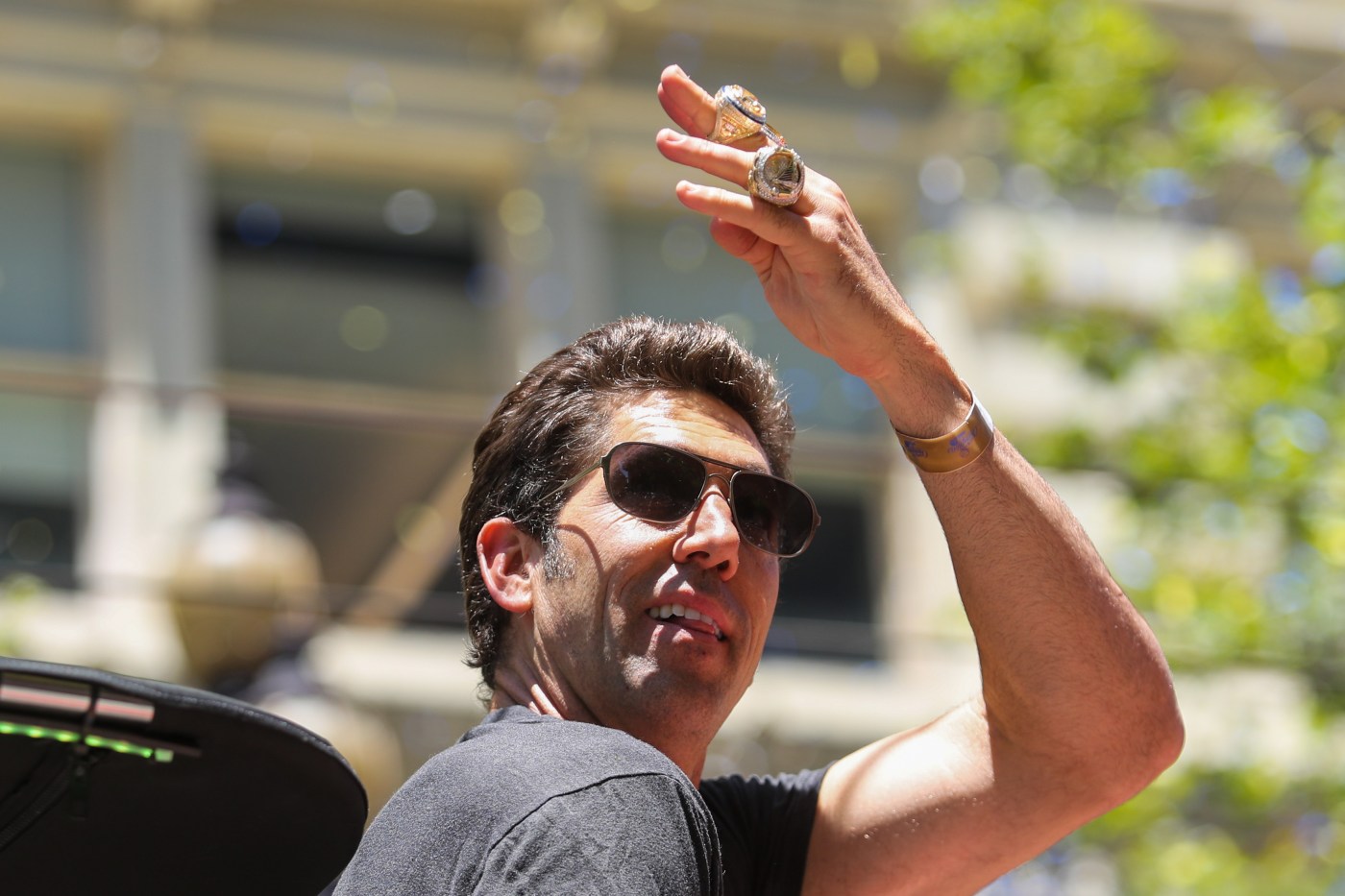 Warriors general manager Bob Myers had his bare feet on the famed parquet floor of the TD Garden in Boston.

Champions can do such a thing.

I spotted Myers from across the court, following the Warriors’ Game 6 win in the 2022 NBA Finals, their fourth championship win in eight years. I had to make a comment on his giddy-up. He was wearing a t-shirt and running shorts, and again, no shoes. Sitting on the Warriors’ bench, talking to another reporter, he was holding a golden chalice and a champagne bottle that was filled with Michelob Ultra.

And yet, in that moment of ultimate satisfaction, his mind went elsewhere:

It was less than a week away.

The Warriors have a ton of practice at drafting amid the celebration of winning a title. During the peak dynastic years, they once held a draft workout the morning of their parade in Oakland. (Maybe that’s why they drafted Jacob Evans…)

And Myers couldn’t help but laugh at the circumstance. This was a champagne problem — or perhaps a Michelob Ultra problem — but a problem nevertheless. Other teams have been focusing on the draft for weeks, if not months. There are plenty of folks working on the draft for the Warriors year-round, but the Dubs would only have a few days where the whole front office and coaching staff’s heads would be put together on the same thing.

And let’s be real, some of those heads would be nursing hangovers.

So Myers put it to me, right there on the floor in Boston: “Who would you draft?”

I have been playing fantasy GM for years. This was my moment.

So I told the Warriors’ decision-maker (and assistant general manager Kirk Lacob, who was standing next to me) what I’ll tell you now:

“Take the kid out of Wake Forest, Jake LaRavia.”

There have been some really rough drafts over the last few years, but I really like this one. I think some serious talent — perhaps lottery talent — can fall to the Warriors at pick No. 28.

I love Dalen Terry out of Arizona. He might be my favorite player in the draft. But I cannot fathom how he’d be on the board for the Dubs at No. 28.

I think young Serbian Nikola Jokić could be an ideal pick for the Warriors — Golden State could stash him in Europe, but he has as high a ceiling as any player in this draft. But, again, it’d be ridiculous for him to be around at No. 28.

LaRavia might not be there at No. 28, but he feels like a more likely option for the Warriors.

And what an option he is.

There are two types of players available at the bottom of the first round. High-floor players or high-ceiling guys. Given the station, teams are getting one or the other.

LaRavia is the ultimate high-floor guy.

He’ll likely never be more than a role player, but what team can’t use more quality role players?

And this young man (20 years old) was built to be a Warrior.

It takes only a few minutes of watching LaRavia’s highlights to realize that he would thrive in Golden State’s system. Watching full, actual basketball games (a novel concept these days, I know), it’s even more obvious that LaRavia was tailor-made for Steve Kerr’s motion offense.

There is simply no better cutter in this draft.

He might be the best spot-up shooter who won’t go in the lottery, too.

There’s also a craftiness — inside the system, of course — that cannot be taught, but can be maximized in San Francisco.

It’s evident that he has an enviable basketball IQ — seeing the whole floor, understanding where all nine other players, are — and that manifests in his team defense as well.

This guy was built to be a Dub.

The knock on LaRavia? He’s not the most athletic dude. He can square up on defense, but quick players are going to give him trouble on the perimeter. He’s not someone who is going to create his own shot off the bounce.

In other words, he’s not a high-ceiling guy.

But the Warriors, again, only need that high floor.

Remember: Golden State will be paying not just their draft pick’s rookie salary, but also the luxury tax that comes along with that contract. In all, it’d be a lot to pay for someone who can’t help the Warriors repeat as champions.

Money is a legitimate concern here. It’s why a draft-and-stash option is very much on the table at No. 28.

But the Warriors have also shown, time and time again, that they’ll pay for quality.

“I don’t think the money is going to be a factor as far as whether we trade out or keep the pick,” Myers said at his end-of-season presser Wednesday. “It’ll be if it makes sense, so it won’t really be a money decision.”

And LaRavia, 20, makes all the sense in the world for the Warriors.

They have a backup point guard in Jordan Poole, who needs the ball in his hands if Steph Curry isn’t on the floor. They’ll have James Wiseman in the center rotation for next season, too, hopefully alongside Kevon Looney, Draymond Green, and Jonathan Kuminga. If the Warriors feel a need to add at either position, they can bring in a player on a veteran minimum — there are always good centers and point guards available on the cheap in free agency.

But wings? The only way to get players like that is to pay up or bet big, as the Warriors did with Otto Porter last season (three games for Orlando in 2021) or like any team does with a late first-round draft pick.

I can see him and Moses Moody holding down the second unit wing spots next season, playing off a Poole and Wiseman or Poole and Kuminga pick-and-roll — sliding in for minutes next to Curry and using all that gravity to make incisive cuts and open 3-pointers.

It could be a thing of beauty.

Of course, there are other players that are more than worthy of pick No. 28. There is no one right choice.

But the man in charge asked me a question, and I answered. I don’t care if he was joking about it or not. I’m a dork who has been watching NBA Draft prospects, on the regular, since early March. I take this seriously. So take it from me:

LaRavia is the guy for the Dubs.