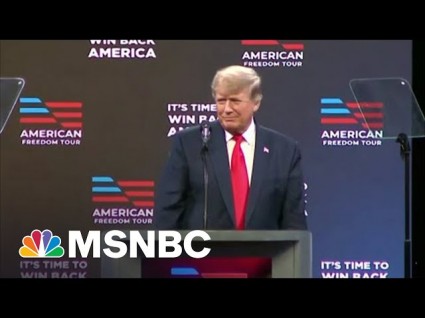 An ABC News/Ipsos poll finds 58% of Americans think Donald Trump should be charged with a crime for his role in The Stupid Coup of January 6 (emboldening is mine):

With the first full week of hearings for the House select committee’s investigation into the Jan. 6 attack on the U.S. Capitol now complete, nearly 6 in 10 Americans believe former President Donald Trump should be charged with a crime for his role in the incident, a new ABC News/Ipsos poll finds.

Six in 10 Americans also believe the committee is conducting a fair and impartial investigation, according to the poll…

Besides proving that the Streisand Effect is real, Republicans screaming into TV cameras that the committee itself is illegitimate doesn’t seem to be making any headway. We interrupted:

Attitudes on whether Americans think Trump is responsible for the attack on the U.S. Capitol remain relatively stable. In the new ABC News/Ipsos poll, 58% of Americans think Trump bears a “great deal” or a “good amount” of responsibility for the attack on the Capitol. This is unchanged from an ABC News/Ipsos poll in December 2021 and similar to the findings of an ABC News/Washington Post poll conducted just after the attack in January 2021.