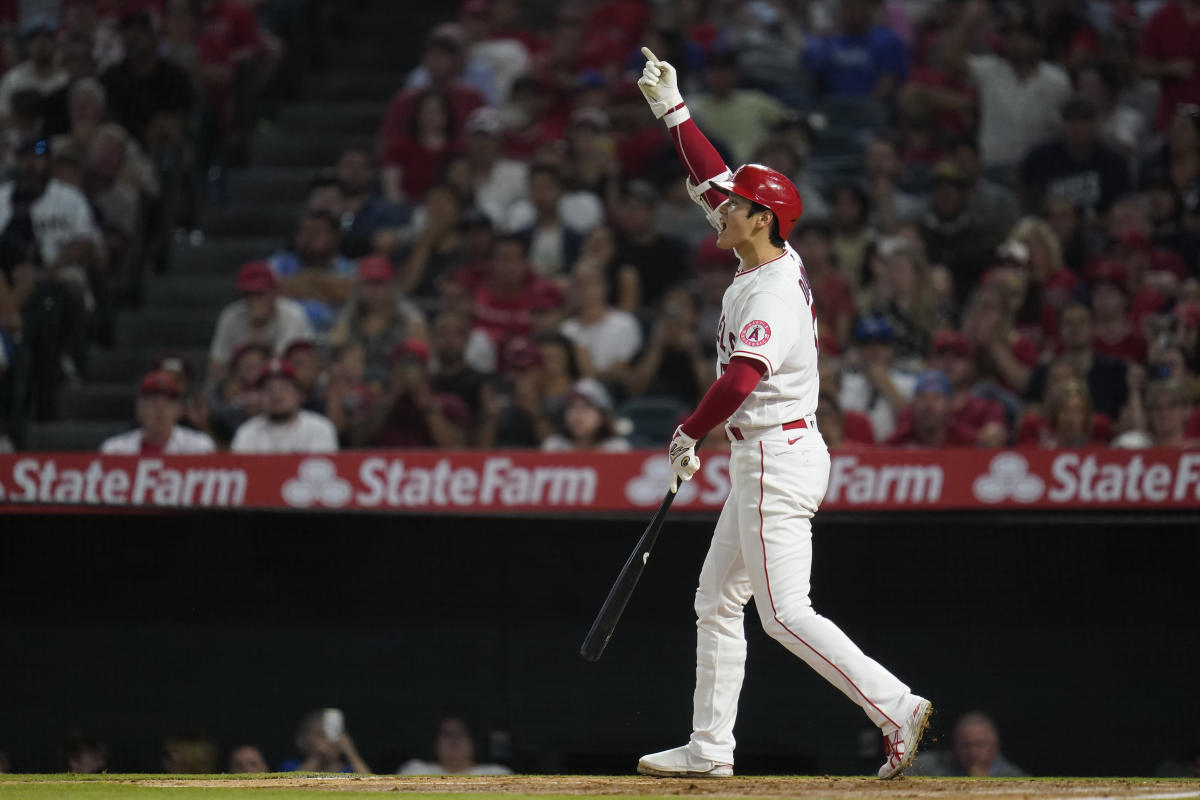 ANAHEIM, Calif. (AP) — On back-to-back nights during an otherwise ordinary June homestand for the Los Angeles Angels, Shohei Ohtani accomplished two feats that would each be career landmarks for practically any other player in baseball history.

On Tuesday, Ohtani hit a pair of three-run homers and drove in a career-high eight runs, the most by a Japanese-born player in the major leagues.

On Wednesday, Ohtani racked up a career-high 13 strikeouts while pitching eight scoreless innings of two-hit ball, retiring 16 straight Kansas City Royals and getting 24 outs without a hit against his final 24 batters.

This superstar who plays both ways is still coming up with new ways to dazzle the baseball world.

A year after he unanimously won the AL MVP award in honor of his wholly unprecedented season, Ohtani is still finding new places to inscribe his name in the major league record books while he strives to get the perpetually struggling Angels (34-38) back on a winning track.

Nearly halfway through a second straight season of revolutionary play, Ohtani’s unique skills are becoming normal to a degree that would have seemed impossible before he reached his full powers last year — yet his fans and his fellow Halos never take it for granted.

“Watching it every day, you think you get used to the greatness, but there’s a lot of things involved with him,” Angels interim manager Phil Nevin said. “Just the way his mind is in the game, he’s aware of everything. He’s incredible. To see what he does on a baseball field, it’s fun to be a part of every day.”

Ohtani (6-4) saw his performances in more practical terms Wednesday night after he picked up his third consecutive win and moved into fifth in the AL in strikeouts despite making two or three fewer starts than everybody above him.

“We were on a losing streak, and I just wanted to put an end to that, to get the team rolling,” Ohtani said through his interpreter. “It’s what the team needed.”

No player had ever accomplished the combined feat of eight RBIs and at least 10 strikeouts in back-to-back games — not Babe Ruth, and not anybody else from the two-way olden days.

No player in baseball history had ever had both an eight-RBI game and a 13-strikeout game separately, yet Ohtani did it on consecutive nights at the Big A. Tony Cloninger came the closest with both a 10-strikeout game and a nine-RBI game for Atlanta during the 1966 season.

Although he’s less than halfway through, Ohtani is beginning a remarkable encore to his groundbreaking MVP season.

His pitching numbers are mostly ahead of last year, with his strikeouts up and both his walks and ERA down. His hitting numbers are still a step behind last year’s pace, but rising rapidly: He is batting .301 in 22 games since May 29 with six homers and 16 RBIs.

Ohtani has a 2.90 ERA, and the sheer diversity of his pitching repertoire remains daunting. Kansas City’s Mike Matheny had never watched Ohtani pitch against one of his teams as a manager until Wednesday night, and the experience was eye-opening.

“I don’t think you’re going to find as many guys with as many weapons as what we saw today,” Matheny said. “He was throwing it all for strikes, and he mixed it up. He was throwing three different sliders, plus a cutter and a curve. When the split started going, that’s when the strikeouts really started to happen, and he’s got 100 (mph) in the tank that he hardly ever showed. You control the strike zone, you have that many things to use, and you’re throwing all of them for strikes, it’s going to be a tough day at the plate.”

Ohtani is performing his latest unprecedented feats during yet another up-and-down year for the Angels, who haven’t had a winning season with Ohtani on their roster — or won a playoff game during fellow MVP Mike Trout’s much longer career.

Los Angeles started 24-13 and was in first place in the AL West on May 16, but the Angels quickly fell into a losing spiral that stretched to a franchise-record 14 games and resulted in the firing of manager Joe Maddon.

Ohtani ended it, of course: He pitched seven innings of four-hit ball and hit a two-run homer on June 9 for a 5-2 win over Boston. With Wednesday’s win over Kansas City, the Angels have won four of their last six under Nevin, Ohtani’s fourth manager in five seasons in Orange County.

The Angels still have plenty of time to turn around their season, and the expanded playoff field would make it easier than ever for Los Angeles to end its decade of underachievement. And Ohtani shows no signs of growing weary under the Angels’ struggles, even though he would have every right.

Angel Stadium gave him a standing ovation Wednesday night after his seventh shutout inning, but Ohtani told Nevin that he insisted on returning for the eighth.

“I felt like I still had some stuff in the tank,” Ohtani said.