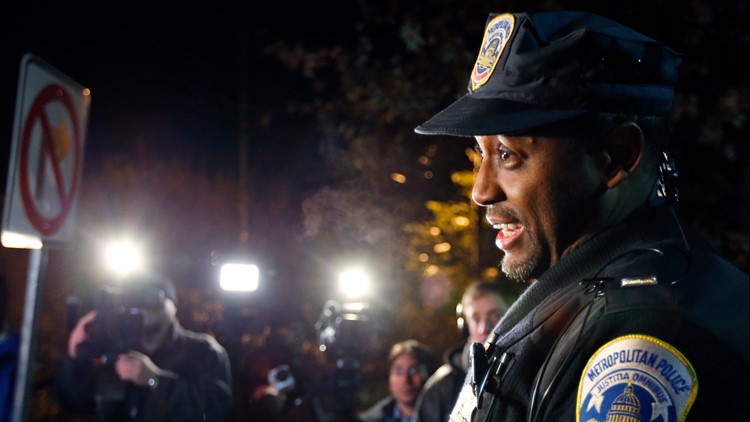 Jesse Porter, 58, has been charged with involuntary manslaughter in the death of 25-year-old Maurica Manyan, police said.

WASHINGTON — A retired Metropolitan Police Department (MPD) Lieutenant has been charged in the shooting death of a special police officer at the Anacostia library on Thursday after witnesses told investigators a gun when off while he was “joking” with a class after a training session.

The former officer may have mistaken his real weapon for a dummy training gun that the class had been handling throughout the day, according to witnesses.

Jesse Porter, 58, has been charged with one count of involuntary manslaughter and one count of negligence while holding a loaded firearm in the death of the officer, 25-year-old Maurica Manyan.

MPD said Thursday the shooting happened around 3:30 p.m. at the library on Good Hope Road.

In a press conference Thursday evening, MPD Chief Robert Contee III said Porter was conducting ASP Baton training in a library room. At some point during the training, Porter took out the weapon and fired a shot, striking Manyan.

She was taken to the hospital for treatment, where she was pronounced dead.

According to charging documents in the case, witnesses told investigators the class was finished for the day and photos were being taken. The mood was lighthearted and there had been joking throughout the day that Manyan had been moving too slowly.

“They were all joking with the decedent that she was never ready,” according to one witness.

When the victim paused to take off her mask and adjust her hair for a picture, the former officer pulled a gun from his holster and pointed it at her. The gun went off.

According to one witness, Porter said, “I thought I had my training gun. Why did I do this? Is she OK?”

Another witness described Porter as “distraught.” Porter assisted in giving CPR to Manyan, according to a police report filed in court Friday.

The group had been handling training guns during the day and Porter and others were packing up and putting away props just prior to the incident, according to the police report.

ASP Batons are expandable batons commonly used by law enforcement. It is not clear why a live weapon was in the room during baton training.

Police say the firearm used was recovered on the scene.

Manyan was a Special Police Officer for D.C. Public Libraries. According to D.C. Police, Special Police officers are commissioned to protect a specific property. The officers can carry a weapon and make arrests at that location. SPOs must also be licensed and undergo training.

According to a family member, Manyan leaves behind a 4-year-old boy.

The charges were brought against  Porter following a consultation with the United States Attorney’s Office for the District of Columbia. The court released Porter on Friday under a personal promise that he would appear for his next court appearance on Aug. 24. Prosecutors did not oppose the judge’s decision. Porter must also surrender all personal firearms and ammunition to police by 7 p.m. Friday, and he is required to check-in weekly with pretrial services until his next court appearance.

WUSA9 is now on Roku and Amazon Fire TVs. Download the apps today for live newscasts and video on demand.

Download the WUSA9 app to get breaking news, weather and important stories at your fingertips.