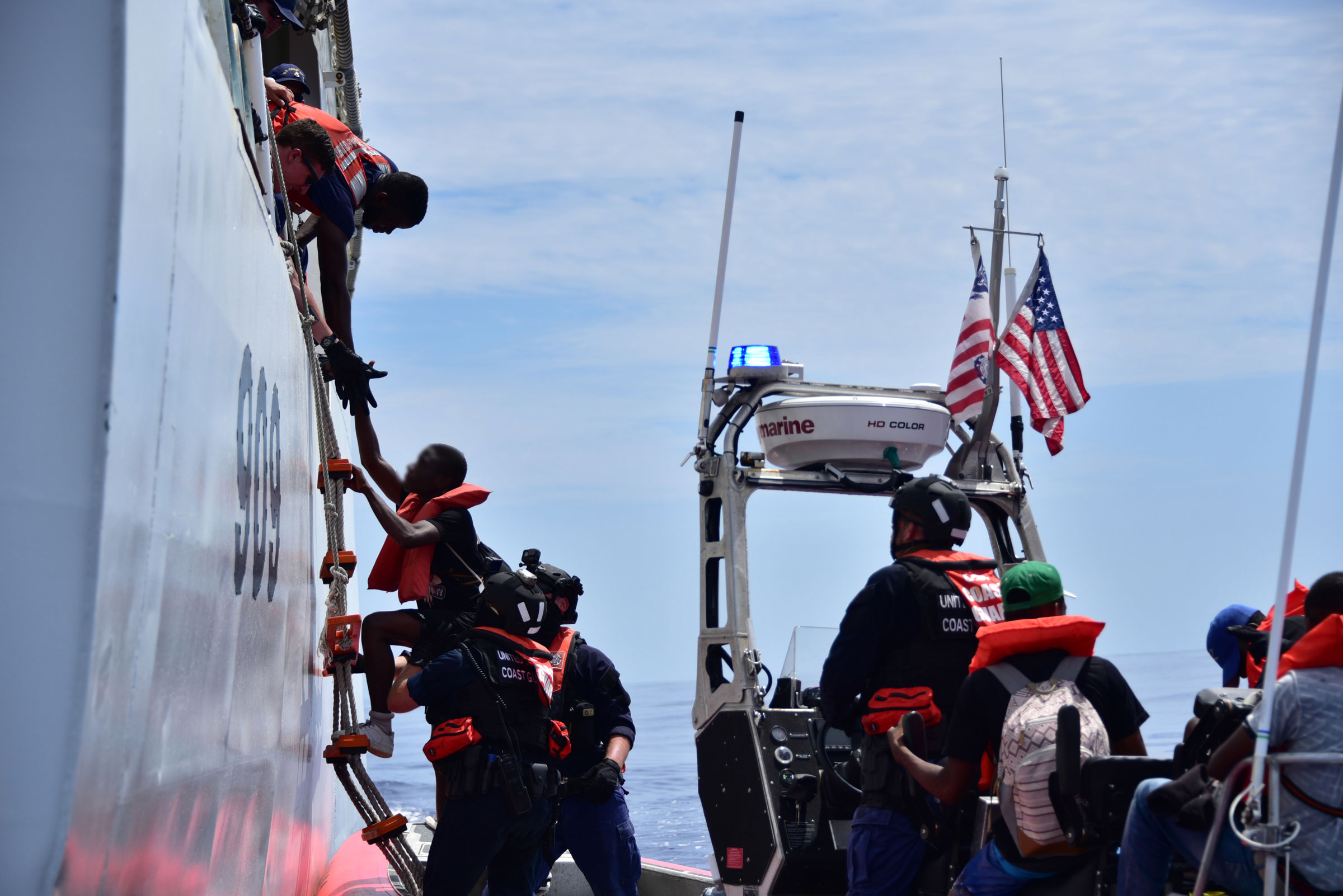 Early last week, a group of 67 Haitians aboard a small, rickety boat waved down the United States Coast Guard about 16 miles southeast of Great Inagua, Bahamas. The boat’s sail was torn, U.S. Coast Guard officials noted, and grainy Coast Guard footage showed its decks were lined with men, women, and children in distress.

The Coast Guard’s rescue was among the latest in a growing list of encounters involving Haitian migrants attempting the dangerous journey to the U.S. by sea. As gang violence, poverty, and political instability worsen in Haiti, migrant advocates say the number of people attempting to come to the U.S. in vessels that are not built for such voyages is likely to continue to increase.

The recent numbers mark a new trend. So far this year, the Coast Guard has interdicted nearly twice as many Haitians at sea than the previous five fiscal years combined. The number of Haitian migrants encountered at sea by the Coast Guard began to increase exponentially by mid-March, TIME’s analysis found.

To meet this uptick, the U.S. Coast Guard has launched a partnership with the Haiti Coast Guard and other Caribbean nations. It has also increased the use of its ships and air patrols, each of which has a minimum number of personnel aboard, depending on the vessel. “We have so many people leaving their country and they’re doing it in unsafe, overladed, rusted vessels, and these vessels are not seaworthy,” says Groll, who works in the Coast Guard’s Miami public affairs office, and says the biggest concern is preventing migrant deaths.

“Some of [the vessels] float,” she says. “But there’s no safety equipment on board, nobody is wearing a life jacket, no navigation lights, no way for anyone to call for help.”

Haitians are transferred from Coast Guard Cutter Campbell’s small boat to the cutter approximately 20 miles south of Turks and Caicos, May 9, 2022. The Haitians were repatriated to Haiti on May 11, 2022.

More Haitians have been leaving the country than returning for decades, according to the Migration Policy Institute, a nonpartisan research organization. But 2021 was a particularly damaging year for the nation. On July 7, 2021, Haiti President Jovenel Moïse was assassinated. A month later, the country experienced a 7.2-magnitude earthquake, killing more than 2,200 people and destroying essential infrastructure. A few days after that, a tropical storm hit.

The tragedies of 2021 were compounded by a 2010 7.0-magnitude earthquake that the country has yet to recover from. That earthquake killed an estimated 220,000 and left 1.5 million without a home.

Such devastation is now the backdrop for worsening political instability and a dramatic rise in gang activity and violent crime, according to research conducted by César Muñoz, senior Americas researcher at Human Rights Watch, an NGO that investigates human rights abuses. “There’s a very, very significant security crisis,” Muñoz tells TIME. “This increase in people who are leaving Haiti is absolutely foreseeable.”

These overlapping crises corresponded with the global spread of COVID-19. Because of pandemic-related economic downturns, and prevailing racism, an increasing number of Haitians, who had fled to other parts of Latin America, mostly Brazil and Chile, after the 2010 earthquake, began migrating north to the U.S.-Mexico border. There they encountered a public health measure, Title 42, which allowed U.S. border officials to expel most Haitians before they were allowed to seek asylum in the U.S. Since September, U.S. officials have used Title 42 to expel more than 25,800 Haitians back to Haiti, according to the United Nations’ International Organization for Migration (IOM). A recent IOM survey of those who have been repatriated back to Haiti between October and January found that more than 86% did not plan to remain in Haiti.

Louis Herns Marcelin, a sociocultural anthropologist who is currently studying migration from Haiti and is the Director of Global Health Studies at the University of Miami, expects a growing number of Haitians to attempt to emigrate by sea. While conducting research, Marcelin spoke to Haitians who boarded a small boat to leave the country. When the boat capsized and the migrants found themselves again in Haiti, they were still “willing to go back again,” Marcelin tells TIME. “So can you understand the desperation, the level of desperation? Because there is no place to inhabit, there is no place to live, there is no place to work, there is no place to dream.”

The Biden Administration’s plan to address the root causes of migration to the U.S. has focused largely on Central America, but a small component includes resources for Haitians. At the 9th Annual Summit of the Americas earlier this month, 20 countries signed the Los Angeles Declaration on Migration and Protection, which includes increasing seasonal worker visas for Haitians, a family reunification plan so that Haitians in the U.S. can petition for their family members to join them, and increasing the number of Haitians accepted into the U.S. Refugee Admissions Program. The U.S. has also granted Temporary Protected Status, meaning protection from deportation and a work permit, to Haitians already in the U.S.

Both Muñoz and Marcelin note that the U.S. effort to aid Haiti, including the recent declaration, is both insufficient and contradictory. The U.S. acknowledges the hardship and danger Haitians face, they say, but continue to send Haitians back to Haiti in high numbers. “The United States doesn’t have a clear, organized, structured policy toward Haiti,” Marcelin says, adding, “There is no shame in the way that [the U.S.] responds.”

A community in mourning

The Coast Guard’s rescue attempt last week ended safely. The boat remained afloat and no one was killed; all 67 migrants, including the children, were returned to Haiti.

It stands apart from many other attempted crossings that end in abject tragedy. On June 16, mourners gathered at the Parroquia Santa Teresa in San Juan, Puerto Rico for the funeral services of 11 Haitian women and girls who drowned after their boat capsized off the coast of Desecheo Island on May 12. The U.S. Coast Guard and other rescue agencies were able to rescue 38 people, 36 of whom were Haitian. The Washington Post reports that at least a dozen aboard that boat are still missing.

“It was really difficult,” Haitian Bridge Alliance director Guerline Jozef, who attended the funeral service in San Juan, tells TIME over WhatsApp. “I couldn’t even speak at the funeral because my heart was so heavy.”

The caskets containing the bodies of 11 dead were draped with Haitian flags. Photos of the women and girls lined the edge of the church, surrounded by flowers. “Through time we have seen a perfect storm in which you have crippling serial disasters with an economy that has been totally, totally destabilized, law and order that doesn’t exist,” Marcelin says. “People have to leave the country.”

“What can people expect?” Marcelin adds. “We knew that [death] was going to happen. And it is happening. Now what? That’s the question.”