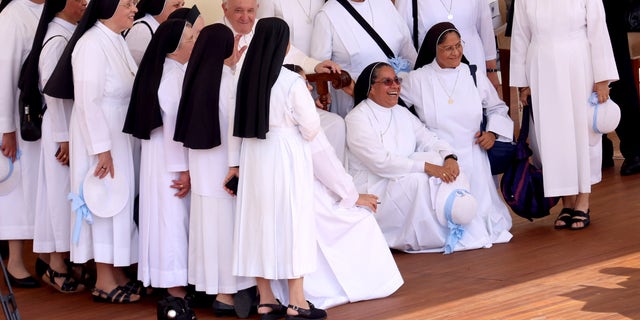 Pope Francis spoke at his General Audience on Wednesday about the effects of old age, elderly frailty and the virtue of helplessness.

The pope, 85, has revisited the topic of old age and deterioration many times in recent years. His lessons and comments on the nature of growing old — often optimistic in nature — have taken on new potency as the pontiff struggles through a series of health concerns while continuing his physically demanding work.

In his sermon, the pope told his listeners that old age was a time when Christians must learn to accept the help of others — even in the basic tasks of day to day life. He compared the helplessness of old age to the serenity of giving up control of one’s life to God.

“Your following [of Jesus Christ] will have to learn to allow itself to be instructed and molded by your frailty, your helplessness, your dependence on others, even in dressing, in walking,” said Pope Francis.

Pope Francis poses with nuns at the end of his general weekly audience in St. Peter’s Square on June 22, 2022, in Vatican City, Vatican. (Photo by Franco Origlia/Getty Images)

“Do we have a spirituality truly capable of interpreting the season – now long and widespread – of this time of our weakness entrusted to others, rather than to the power of our autonomy?” the pope asked the audience.

Pope Francis went on to state that if lived well, the fragile last years of people’s time on Earth can be “the best part of their lives.”

“The honour of their faithfulness to their sworn love, their fidelity to following the faith they have believed, even in the conditions that bring them nearer to the moment of taking leave of life, is their title of admiration for the generations to come and of grateful recognition from the Lord,” he added.

Pope Francis greets a group of children at the end of his general weekly audience in St. Peter’s Square on June 22, 2022 in Vatican City, Vatican. (Photo by Franco Origlia/Getty Images)

Last July, the pope underwent surgery on his colon and was hospitalized for almost two weeks. Since the operation, the pontiff has regularly complained of knee pain and other side effects that make mobility and physical exertion difficult.

POPE SHOCKED BY KILLING OF JESUIT PRIESTS IN MEXICO

The pontiff began being escorted via wheelchair to his appearances last month – the first time he’s needed such support since his surgery in 2021. Pope Francis has previously opted to sit when possible instead of standing for prolonged periods of time.

The pontiff continues to suffer from a variety of health problems, most notably his injured knee. The pope informed the public that he will not be celebrating the Eucharist for the Solemnity of Corpus Christi this year – the third consecutive celebration he will be forced to miss.

Francis was also forced to also postpone his apostolic visit to the Democratic Republic of the Congo, citing advice from his doctor. The visit was scheduled for early July and was meant to be a short tour of the DRC and the South Sudan. A new date will be decided in the future.