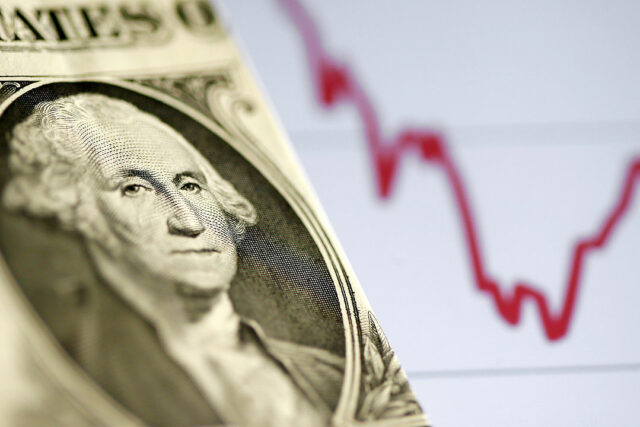 THE PHILIPPINE PESO on Wednesday slumped against the US dollar, closing at its lowest value since November 2005, amid the Bangko Sentral ng Pilipinas’ (BSP) signals of gradual policy tightening.

The BSP is widely expected to fire off a 25-basis-point (bp) hike at its policy meeting today (June 23) to curb inflation.

The local unit closed at P54.47 versus the dollar on Wednesday, shedding 20.5 centavos from its P54.265 finish on Tuesday, data from the Bankers Association of the Philippines showed.

The local unit’s weakest showing was at P54.635 on Wednesday, the lowest since March 2003. Its intraday best was P54.30 against the greenback.

Dollars exchanged inched down to $1.34 billion on Wednesday from $1.38 billion on Tuesday.

“The peso’s performance continues to be driven by fundamental factors such as a strong dollar and the country’s increasing import demand,” China Banking Corp. Chief Economist Domini S. Velasquez said in a Viber message.

The BSP’s signals of gradual monetary tightening was also a factor in the peso’s weakening against the US dollar, she added.

“The BSP’s dovish stance on monetary policy normalization against aggressive rate hikes of the Fed contributed to the recent weakening of the Philippine peso. Even if BSP hikes its policy rate by 25 bps in every meeting this year, we expect domestic policy rates to continue to lag behind,” Ms. Velasquez said.

“This gradual pace of BSP’s monetary tightening will contribute to the general weakness of the peso as investors will opt to move to higher yielding assets.”

A BusinessWorld poll last week showed 15 out of 16 analysts anticipate a rate hike at the June 23 meeting. Nine analysts expect the Monetary Board to raise rates by 25 bps. Six analysts see an increase of 50 bps, after the US Federal Reserve hiked rates by 75 bps last week.

BSP Governor Benjamin E. Diokno and current Monetary Board member Felipe M. Medalla have said it is unlikely that they will raise key rates by more than 25 bps in today’s meeting.

“Personally, I do not like 50 basis points. It signifies that we know something bad that you don’t know. It could be misread, as ‘wow, what does the central bank know that we don’t know,’” Mr. Medalla said during a roundtable with BusinessWorld editors on June 14.

The BSP still has the “luxury of time and large reserves,” Mr. Medalla said at that time. “If the markets think we’re behind the curve, they will attack the peso,” he added.

The peso continued to weaken against the US dollar despite the latest declines in global crude oil prices, Rizal Commercial Banking Corp. Chief Economist Michael L. Ricafort pointed out.

A trader also attributed the peso’s performance to hawkish expectations ahead of US Fed Chair Jerome H. Powell’s two-day testimony to Congress.

The Monetary Board kicked off its tightening cycle on May 19 by raising the yield on the BSP’s overnight reverse repurchase facility by 25 bps to 2.25%. Interest rates on the overnight deposit and lending facilities were also increased to 1.75% and 2.75%, respectively.

This was the first increase in borrowing costs since 2018 and followed cuts worth 200 bps in 2020 as the BSP moved to support the economy amid the coronavirus pandemic. — Keisha B. Ta-asan