In a clip of the documentary from filmmaker Alex Holder, which was obtained by CNN, Pence is shown an email by a member of his staff that includes the draft House resolution demanding that Pence invoke the 25th Amendment to remove Trump from power.

Pence tells his aide, “Yeah, excellent” as he is handed the phone with the email. He then offers a pained smirk and asks the aide to “tell Zach to print me off a hard copy for the trip home.” Pence then collects himself for the rest of the interview.

The next clip shows Pence saying, “I am always hopeful about America,” juxtaposed against the backdrop of crews erecting security fencing around the Capitol building.

The footage of Pence’s interview, which has not been previously released, was captured less than a week after pro-Trump rioters stormed the US Capitol in an effort to stop the certification of Joe Biden’s election win. Pence had to be evacuated to safety amid calls from rioters to “Hang Mike Pence.”

The same evening that Pence was interviewed, the House passed the resolution calling for Pence to invoke the 25th Amendment to remove Trump from power and deem him unfit for office. Only one Republican, Rep. Adam Kinzinger of Illinois, voted in favor of the resolution, which was effectively a symbolic vote taken one day before the House impeached Trump for a second time on January 13, 2021.

In the short clip of the documentary set to be released by Discovery Plus, which is owned by CNN’s parent company, Pence does not comment on the substance of the resolution. But the video is a small sample of the additional content now in the possession of the committee. However, the documentary states that during his interview, the former vice president declined to discuss anything related to January 6.

Holder, the filmmaker, appeared Thursday behind closed doors for a deposition with the January 6 committee, which likely asked him about what he observed over the course of nearly six months when he had behind-the-scenes access to key Trump figures and even the former President himself.

In one clip from an interview with Trump on March 2021 at Mar-a-Lago, the former President is asked directly about what happened on January 6.

“Well, it was a sad day, but it was a day where there was great anger in our country, and people went to Washington primarily because they were angry with an election they think was rigged,” Trump said.

Holder’s “Unprecedented” three-part docuseries about the 2020 election will be released on Discovery Plus later this summer. The documentary includes never-before-seen footage of the Trump family on the campaign trail and their reactions to the outcome of the election.

Trump and his allies have yet to react publicly to news that Holder was subpoenaed by the committee or to the revelation of what was said in the interviews now in the panel’s possession.

The documentary includes interviews with Trump as well as three of his children: Ivanka, Don Jr. and Eric, according to the clips released by Discovery Plus and obtained by CNN.

Like Trump, his family members speak directly to camera in the footage. The interviews could provide new insight into what those closest to the former President were saying in the lead-up to and after January 6.

In one short clip obtained by CNN from December 2020, Ivanka Trump told the filmmaker, “As the President has said, every single vote needs to be counted, and needs to be heard. He campaigned for the voiceless.”

The clip seems to be from the same interview excerpt, first reported by The New York Times Tuesday night and confirmed by CNN, where Ivanka Trump said her father should “continue to fight until every legal remedy is exhausted” because people were questioning “the sanctity of our elections.”
The interview came days after then-attorney General William Barr publicly stated there was no evidence of widespread voter fraud. Under oath, Ivanka Trump told the January 6 committee that Barr’s assessment “affected my perspective” and she “accepted what he was saying.”

Those comments appear to contradict the sentiment she expressed in the documentary interview.

The documentary also features Pence talking in detail about the process of Trump selecting him as his running mate. He talks about Trump inviting his family to his estate in Bedminster, New Jersey and playing golf with the then-GOP nominee as part of his vetting process.

The documentary then notes how Trump attacked Pence on January 6 as rioters called for his hanging, before turning to an interview clip from Trump.

“I think I treat people well, unless they don’t treat me well, in which case you go to war,” Trump says.

In this article:New documentary footage reveals Pence reacting to a resolution calling for him to invoke 25th amendment to remove Trump from power - CNNPolitics, Politics

CNN  —  Rhode Island Democratic state Senate candidate Jennifer Rourke was punched in the face by her GOP opponent – a police officer who... 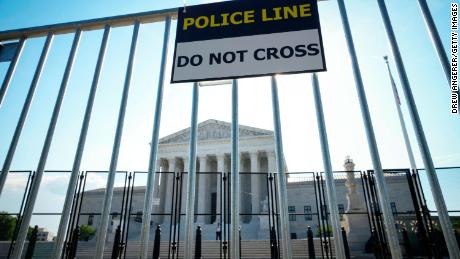 Friday’s decision in Dobbs v. Jackson Women’s Health Organization, which overturned nearly a half-century of precedent, will be a seminal case in the annals...

“Not a day goes by that we aren’t thinking of Brittney and working to get her home,” Democratic Rep. Greg Stanton of Arizona, who...