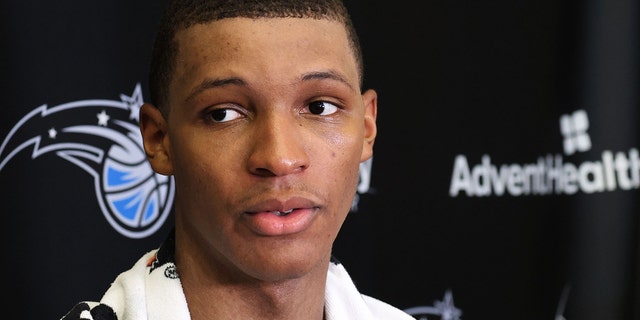 Auburn’s Jabari Smith Jr. could potentially be the No. 1 pick in Thursday’s NBA Draft.

But if you ask him, he would say he’s definitely going to be the top pick when the Orlando Magic go on the clock.

“I’ll be surprised if I’m not taken No. 1,” Smith told Yahoo Sports Thursday. “It’s just my competitive nature mixed with my unselfishness and my ability to just shoot the ball, defend multiple positions and care about winning.

Smith, Chet Holmgren and Paolo Banchero are among the three players who could be the No. 1 overall pick. But ESPN reported the NBA Draft was “increasingly firm” with Smith, Holmgren and Banchero going 1-2-3.

NBA DRAFT 2022: JOHNNY DAVIS ‘EXCITED’ TO GET STARTED, WILL MISS BEING CLOSE TO HIS FAMILY

A behind-the-scenes photo of NBA Draft prospect Jabari Smith Jr. posing for a portrait during media availability as part of the 2022 NBA Draft June 22, 2022, at the Westin Times Square in New York City.
(Mike Lawrence/NBAE via Getty Images)

Smith averaged 16.9 points and 7.4 rebounds per game in his lone year with the Tigers. He was named the SEC Freshman of the Year and won the Wayman Tisdale Award for being the top men’s freshman basketball player in the country.

Smith was a star from his high school years.

He helped lead the U.S. to a gold medal in the FIBA Americas Under-16 Championship in Brazil in 2019. He was also a McDonald’s All-American and Mr. Georgia Basketball in 2021.

The Magic will have the No. 1 pick in this year’s draft. It will be the fourth time in their history they have the top pick. In 2004, the last time they held the No. 1 pick, they selected Dwight Howard.

Jabari Smith of the Auburn Tigers reacts in the final seconds of the second half against the Miami Hurricanes during the second round of the 2022 NCAA Tournament at Bon Secours Wellness Arena March 20, 2022, in Greenville, S.C.
(Kevin C. Cox/Getty Images)