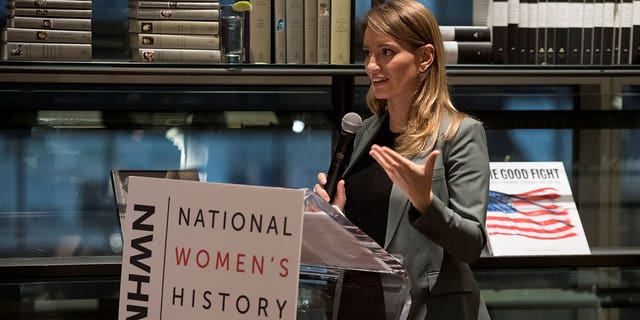 MSNBC’s Katy Tur is still lamenting the outcome of Robert Mueller’s investigation into then-President Trump, claiming that former Attorney General William Barr used the media as a pawn to push his summary of Mueller’s report.

During an appearance on Comedy Central’s “The Daily Show,” host Trevor Noah sat down with Tur to discuss her new book, “Rough Draft: A Memoir,” which details Tur’s early life and volatile relationship with her father.

Tur’s parents were both news chasers who flew in helicopters to capture breaking stories and high-speed pursuits. During a discussion about her parents, Tur claimed that you could draw “a straight line” between how her parents covered the news and how the media covered Donald Trump. She noted that the media today does not want to “digest” the news, but rather get it on air first.

“How do you find that balance between waiting for more information while also telling the people what’s happening,” Noah asked Tur.

Tur claimed she believes that the media is currently learning in real time, and learning from their mistakes. In discussing the tricky balance between efficiency and quality in the media, Tur pointed to Barr’s summary of the Mueller report.

“So he gives [the media] the summary on a Sunday, and it is misleading, as we know right now” Tur said. “It didn’t have any of the underlying evidence, but because we were covering it live, live, live—we went to air with it, and essentially became a pawn in a political document.”

Tur added that the document had a “head start on the truth” for weeks, suggesting that Mueller’s report was far more substantive and accurate.

She went on to say that one of the problems Americans face is that there is a segment of the population that has chosen to demonize journalists, claiming that they only report one way and root for a specific outcome. She stated if MSNBC refused to report on AG Barr’s summary, right-leaning media outlets would have used that as “fodder” to say they ignored something that was good for Donald Trump.

In May 2019, Tur said this on Mueller’s investigation: “Mueller: you have a 400+ page report that lays it out unambiguously in black and white. If special counsel could say confidently Trump didn’t commit a crime, they would’ve. They can’t so they didn’t. Now, it’s up to Congress and the American people to decide what to do.”

Nikolas Lanum is an associate editor for Fox News Digital.