Written by Samantha Sheradsky on August 2, 2022 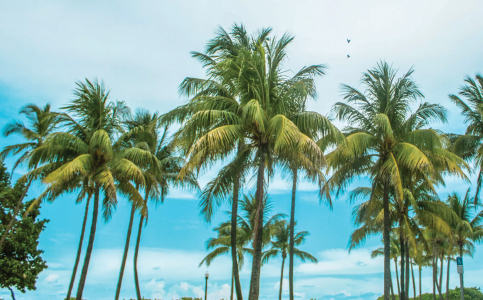 In September, the Miami Beach City Commission is to hear legislation to protect legacy palm trees in specific neighborhoods by allowing residents to label them historic.

“I’m going to bring that proposal forward to allow other neighborhoods the ability to preserve their landscaping and not to have the removal of palm trees, because it is not necessary,” city Commissioner Steven Meiner said.

In fall 2020, Miami Beach commissioners “unanimously” approved the city’s 30-year Urban Forestry Master Plan that aims to increase the tree canopy and the calculation of shade trees in the city. The plan’s goal is to have palms, including royal palms, go from 57% of the city’s trees to 27% by 2050.

“I don’t see the need for it,” Mr. Meiner said. “I think it could actually be damaging to our brand.”

The fabled palms would be replaced with shade trees, which would add protection for people who are walking under the blazing sun. However, some argued two years ago that their leaves could harm the environment as their nutrients could cause algal blooms when they enter stormwater drains.

That video meeting included debate of the forestry master plan as residents voiced opinions of what decision would be best for Miami Beach.

According to a recent report, staff presented this master plan to ensure that they would be adding net trees to the urban forest. They mainly focused on removing 1,000 healthy palm trees and relocating 400 palms from the area as part of 22 current city public works projects.

According to Mr. Meiner, planting new palms won’t count toward the city’s tree count guidelines as new homes and project are being built in Miami Beach neighborhoods.

“Under current city law, only non-palm tree species will be given credit to meeting the city’s code. Essentially, our city is by law forcing the phase-out of palm trees,” he said.

The forestry plan would not give credit for replacing the old palms with new ones if there was a new construction project. The developers would have to replace them with shade trees or contribute funds to the city’s tree fund.

Mr. Meiner says he believes that the current palm tree removal is expensive and that a one-size-fits-all policy would erode the long-time landscape of these trees.

“I did propose legislation that was passed in November which gets rid of the one-size-fits policy that would be applied everywhere,” Mr. Meiner said.

Mr. Meiner is making it his goal to have the commission agree to preserve these iconic palms as they signify Miami Beach and its beauty.

“The removal of so many iconic beautiful palm trees, including royal palms,” he said, “will have a negative impact on our historic, cultural and economic brand.”