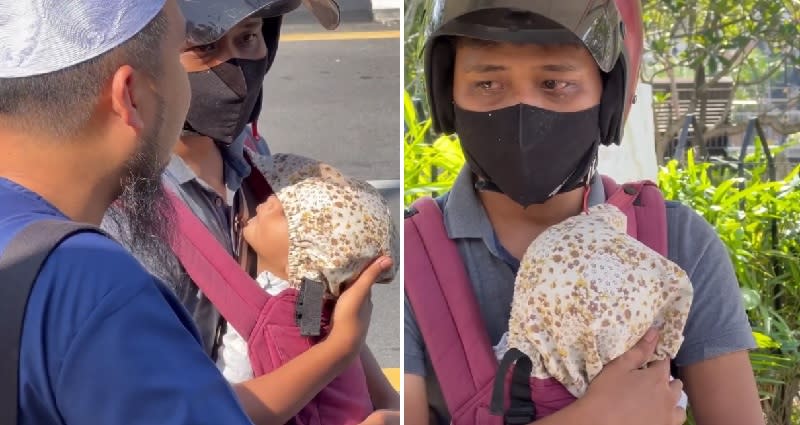 A Malaysian man has gone viral for showing what a dedicated father will go through to take care of his family.

The unidentified man’s story was shared online by celebrity preacher Ebit Lew on Instagram and Facebook on June 16.

According to the preacher, the man’s wife could not take care of their child because of her job at a clothing boutique. They were also having difficulties with their finances, so the man decided to become a food delivery rider using a motorcycle he borrowed from his in-laws. Since the man’s wife is always at work, he decided to bring their baby with him during his deliveries.

“I felt sad when I saw a video of this brother carrying his child while working as a food delivery rider,” Lew said in his Facebook post. “They don’t have enough money, he was crying when we met earlier today; I’m happy to be able to meet him.”

More from NextShark: Meet Ytiet, the Vietnamese cowherd who’s been popping up in your favorite artists’ songs

Touched by the man’s story, Lew took the father out to buy him his own motorcycle. The preacher also said he would cover a monthly babysitter’s fee so that the man would no longer need to strap his child to his torso every day.

“At the point when we think we are struggling, others might have it worse,” Lew wrote. “When he was given a motorbike, we can see his tears and it makes us feel more grateful.”

More from NextShark: John Cena cements his status as a BTS super ARMY by tweeting quote from RM’s UN speech

Several social media users praised the Malaysian father for showing how much he loves his family.

“Fortunately for the baby, there is a father who is willing to fight hard to raise him and help the mother [sic],” one user wrote online.

“This is a father’s love… he’s willing to sacrifice whatever it takes to gain a bit of happiness for his family,” another user wrote.

A Chinese father of two from Fuyang, Anhui Province, also went viral on Weibo last month for working two jobs to help fund seven additional children from struggling families. He has purportedly spent eight years sending each child to school with a new backpack and clothes. Every month, he also purportedly visits each family and provides them with basic necessities such as rice and cooking oil, as well as gifts on each child’s birthday.