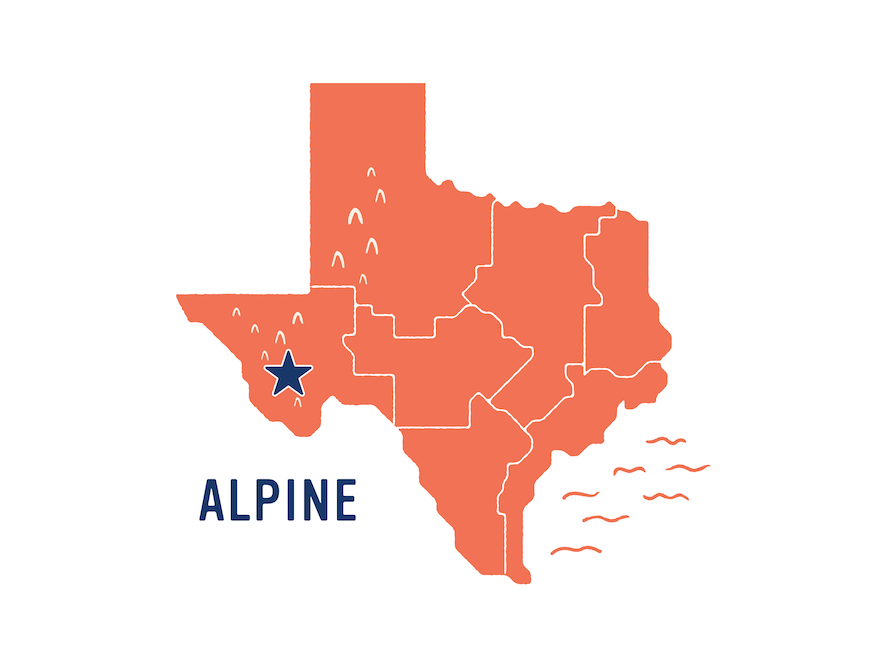 All the towns in the Big Bend region of Texas harbor a funky independent streak developed by living so far off the beaten path. But Alpine – with its vibrant downtown arts scene, wide-open spaces, friendly community and hip Western vibe – takes the cake.

Tucked away in the Chihuahuan Desert 200 miles southeast of El Paso, Alpine boasts a whopping 6,000 residents. That makes it by far the largest town in the area, earning it the unofficial title as the capital of Far West Texas. Located a half-hour’s drive from all the Big Bend hotspots – Marfa, Marathon, Fort Davis – it is a natural jumping-off spot for those wanting to explore the region.

However, with its sweeping views, rolling hills and relatively mild weather thanks to its 4,500 feet of elevation, you might stick around town longer than originally intended. Alpine itself is easy to love, with more than enough activities to keep you so busy apart from the 800,000-acre park to the south.

Hiking to the top of Hancock Hill is a favorite among locals and visitors. The hiking trail starts from the parking lot at Sul Ross State University, and the top of the peak rewards you with a 360-degree view of Alpine and the valley between the Davis and Glass Mountains. Sunrise is the best time for a hike – not only do the sun’s golden rays light up the valley floor, the weather is still mild enough to comfortably enjoy the moderate climb.

While the view from the top is nice, the hike is most famous for the metal desk you will find near the top of the hill. In the early 1980s university students dragged the desk to the top of the hill to create an outdoor classroom. Every year since, travelers have hiked to the desk to write messages in the notebook stashed in its drawer.

While on the university campus, dive into the rich history of the Big Bend Region at the Museum of Big Bend. The museum details a human history starting with Native Americans who inhabited the area for thousands of years before Europeans arrived, then the impact of Spanish missionaries, the Mexican influences and finally the American pioneers as they moved westward during the expansion of the United States.

Inside you’ll find artifacts such as wing bones of the largest flying reptile to have ever lived – the Quetzalcoatlus Northropi. You’ll also see 16th century maps of the new world, belt buckles made by local silversmiths, unique arrowheads, and photographs depicting life for those who lived in the region during the past 150 years.

Each year the museum hosts an exhibition of cowboy gear and western art called the “Trappings of Texas” – the nationally acclaimed exhibition attracts visitors from all over the world.

Back in town, after a day spent walking around the lovely downtown area, you’ll quickly understand why Alpine is constantly named one of the best small towns in the state. Rows of art galleries, boutique stores, restaurants and a theater from the 1920s known for its colorful marquee line Holland and Murphy streets. Ten murals inspired by the region’s scenic desert landscape, folklore, culture and history decorate the sides of buildings throughout downtown.

One of the most Instagrammable murals is on the side of the Kiowa Gallery at the corner of Holland Avenue and 5th Street. You might have to wait your turn to get a picture in front of the mural of a Sul Ross State University banner hanging above a vintage postcard reading “Greetings from Alpine.”

Once the sun goes down the air fills with music. Thanks to the many artists who call Alpine home, the town has a vibrant live music scene – in fact it has been designated a Texas Music Friendly Community by the state government. Musicians play almost every night at bars and music halls such as Old Gringo Coffee and Cocktails, Railroad Blues, Century Bar & Grill at the Holland Hotel, and Alpine Wine. Alpine is also one of the locations for the “Viva Big Bend” summer concert festival, where fifty bands play in more than ten venues in the Big Bend region.

If you want to hang your hat in the middle of all action, consider a stay at the historic Holland Hotel. Henry Trost, the famous architect that designed Marathon’s Gage Hotel and Marfa’s Paisano Hotel, designed the hotel for local rancher John Holland. Opening in 1912, it quickly became a popular accommodation for traveling salesmen getting off the Sunset Limited rail line a few blocks away. The rich mahogany-colored leather chairs, taxidermy heads and Spanish-style wooden ceiling beams give the lobby a feel of an Old West movie. The pet-friendly hotel even has a spa, which comes in handy after a long day of hiking in the desert.

During June and July visitors can watch the Alpine Cowboys play baseball at what Sports Illustrated referred to as the “Best Little Ballpark in Texas (or anywhere else).” Kokernot Field is a 1,400-seat replica of Chicago’s Wrigley Field dating to the 1940s and, like many historic structures in the area, built by a wealthy rancher. Today it is home to the Sul Ross college baseball team and the Alpine Cowboys minor league team.

Don’t let a trip to Alpine end without a night of stargazing. Those famous Texas stars pop in the expansive dark skies that stretch over West Texas. Alpine is part of the Greater Big Bend International Dark Sky Reserve. With more than nine million acres, it is not only the world’s largest reserve, it is nearly as large as 18 International Dark Sky Reserves combined. On cloudless, moonless nights, you can see a giant swath of stars, dust and gas arching over the nighttime sky.