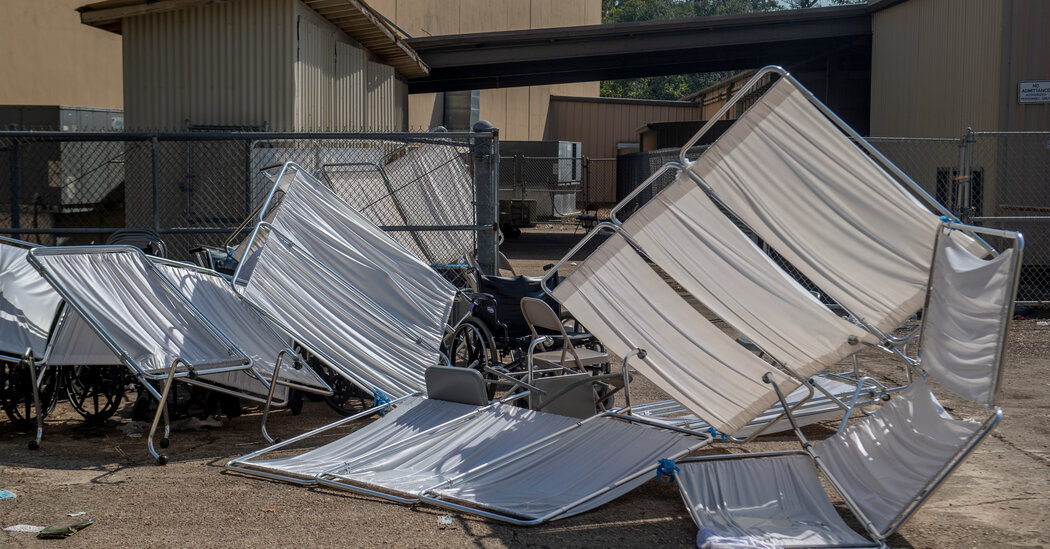 The owner of seven nursing homes in Louisiana who sent more than 800 residents to a squalid warehouse lacking restrooms and proper medicine last year when Hurricane Ida battered the region was arrested on Wednesday on state fraud and cruelty charges, the authorities said.

The man, Bob Glynn Dean Jr., 68, was out of state when he ordered the evacuation of the nursing home residents in Baton Rouge, La., on Aug. 26, 2021, telling staff members to move everyone to a warehouse in Independence referred to as the Waterbury Facility, where they braced for severe weather, according to an arrest affidavit.

There, nursing home residents were subjected to overcrowding, the smell of urine and feces, piles of trash besides puddles of water and inadequate food portions, the affidavit states. Seven people from the nursing homes died, according to the Louisiana Department of Health, which revoked the licenses of Mr. Dean’s seven facilities to operate as nursing homes. As the authorities tried to learn what happened, Mr. Dean refused to cooperate and ordered that his employees do the same, according to an arrest warrant.

Mr. Dean, who in May was prohibited by the Department of Health and Human Services from participating in federal health care programs, was charged on Wednesday with eight counts of cruelty to persons with infirmities, five counts of Medicaid fraud and two counts of obstruction of justice, according to the office of Attorney General Jeff Landry of Louisiana. Cruelty to persons with infirmities, the most serious of the charges, carries a maximum penalty of 10 years in prison and a $10,000 fine.

Mr. Dean had “refused to move his residents out of the warehouse following Hurricane Ida, billed Medicaid for dates his residents were not receiving proper care and engaged in conduct intended to intimidate or obstruct public health officials and law enforcement,” Mr. Landry’s office said in a statement.

John McLindon, Mr. Dean’s lawyer, said by phone on Wednesday that his client, who was set to be released on a $350,000 bond, “desperately tried to get back to Louisiana” to help as Hurricane Ida approached.

“I’m just not sure how they can charge him with cruelty to the infirm when he’s not even there,” he said. He added that Mr. Dean’s mental health had been in decline.

The charges came nearly 10 months after Hurricane Ida walloped the state, making landfall as an intense Category 4 storm that left the power grid in shambles and millions without power for days, including in New Orleans.

By Aug. 28, a day before the storm’s landfall, most of the 827 nursing home residents in the seven nursing homes had been evacuated to the Waterbury Facility and divided among its three main buildings, according to an affidavit.

Longtime residents told The New York Times last year that the warehouse had once been used as a stocking factory and later was used to manufacture aerosol cans before largely going dark, though they said it was still sometimes used to store emergency supplies.

Mr. Dean ordered the residents in the metal building to move into the concrete one because he deemed it more safe, and residents in a building made of cinder block were later asked to do the same, according to the affidavit.

“This transfer of patients resulted in extremely overcrowded conditions in the larger concrete building, which significantly impacted the care that the staff was able to provide to the residents,” the affidavit states.

Waterbury soon lost power, and its emergency generator went out intermittently, which further negatively affected employees and residents, the affidavit states. On Aug. 30, the Louisiana Department of Health sent inspectors to the warehouse.

They saw people overcrowded on mattresses that were placed too close together, residents “in various stages of undress,” including some in T-shirts and soiled diapers or completely naked, and a kitchen area that was next to the portable toilets in the building, which had one inch of water in it, the affidavit states.

Inspectors also reported “issues with infection control, piles of dirty linens and trash and neglect of residents and staff,” according to the affidavit.

A Louisiana Department of Health inspector tried to call Mr. Dean on Aug. 30 to discuss the deteriorating conditions, but he replied, in profanity-laden texts, that he did not want to talk with them.

When the inspector received the vulgar texts, she replied: “Hello Mr. Dean, did you intend to send these messages to someone else?”

“No I did not,” Mr. Dean said, using expletives later in the text. He added: “Do you realize you’re in a conspiracy theory with the federal government.”

A day later, more inspectors went to the warehouse and saw more evidence of worsening conditions.

One worker with the Louisiana Department of Health who was inside the warehouse said nursing home staff members were running around “like chickens with their heads cut off trying to take care of those people,” the affidavit states.

The residents were not cleaned properly, given small portions of food and not provided food options that had been medically required, such as a diabetic meal, the affidavit states.

Mr. Dean, the authorities said, ordered his staff to not move residents to alternate shelters “for fear of losing the residents to other facilities.”

Mr. Dean had suggested last year in an interview with WAFB in Baton Rouge that the number of deaths was not atypical.

“We only had five deaths within the six days, and normally with 850 people you’ll have a couple a day,” he said. “So we did really good with taking care of people.”