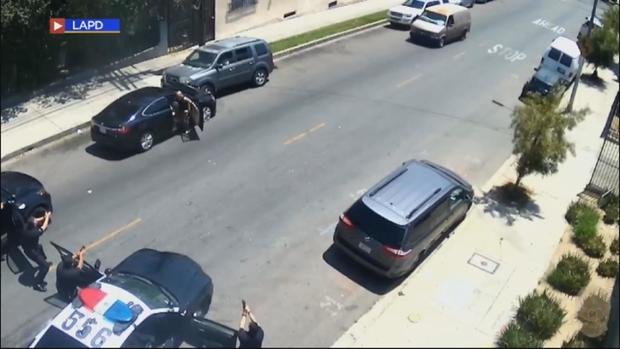 The Los Angeles Police Department released footage from an officer-involved shooting in Westlake.

The suspect was not hit.

The incident began when officers tried to pull over an assault with a deadly weapon suspect near Alvarado and Temple Streets. Jamie Vendivel, 43, did not stop and began to drive away from police until he crashed into another car.

Vendivel then carjacked someone nearby and continued to flee from officers. He briefly drove onto the 101 Freeway before exiting back onto Alvarado Street.

Police continued to chase the suspect until he crashed into a parked SUV near Third Street and Union Avenue. Vendivel exited the stolen car from the passenger side as officers, with their guns drawn, waited for him to surrender.

After a brief standoff, Venidivel raised his hands and showed officers that he had a handgun. He began to run away as authorities fired several gunshots. They missed Vendiviel but did not strike any bystanders.

Police chased Vendivel into a gated complex where an officer fired one shot at him. He also missed Vendivel but did not strike any bystanders.

The suspect was taken to the hospital after hurting his left arm during the chase.

Investigators recovered Vendivel’s ghost gun at the scene and found a holster on the suspect.

The CBS LA Staff is a group of experienced journalists who bring you the content on CBSLA.com.