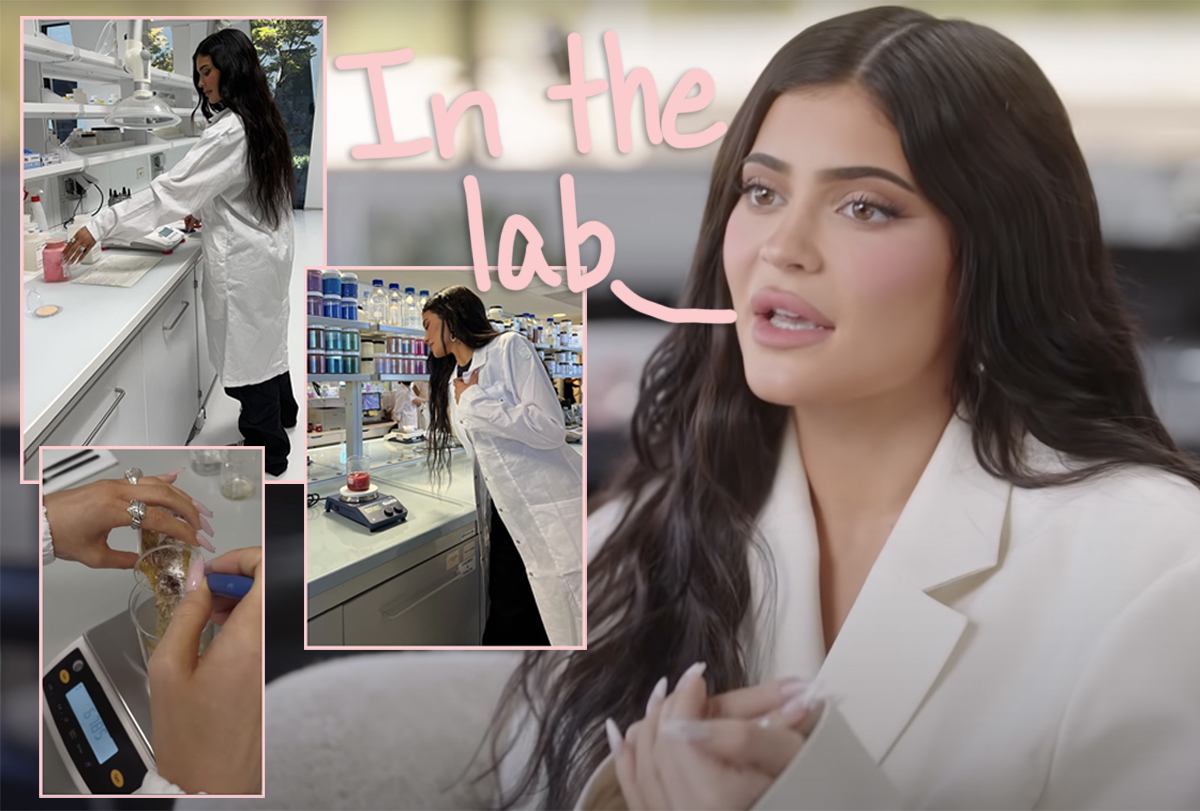 Kylie Jenner is getting called out online for her apparent cosmetics factory shenanigans! But did her critics just totally miss the point of her post?!?!

The 24-year-old social media influencer and beauty biz mogul took to Instagram on Wednesday to show off a new carousel of pictures and videos from the Kylie Cosmetics testing laboratory in Milan, Italy. In the pics, she can be seen wearing a lab coat while overseeing some of the products being made at the facility. Teasing her fans that the new goods are “better than ever,” Kylie dropped a heart emoji in the caption and added this commentary on what customers can expect:

“In the lab creating new magic for you guys”

Sounds simple! So, what’s the problem?? Well, for one, the momma of two’s pics showed her “working” in the lab without a hair net. Her long, dark hair was all over the place while she looked into beakers and worked over lab materials. She also wasn’t wearing gloves while handling the beauty potions. Not up to code!!

You can see this Jenner’s series of lab snaps HERE. Clearly, she isn’t wearing any protective equipment while dealing with the chemicals. In a real testing center while actually doing science, that wouldn’t fly! And fans didn’t hesitate to point that out. (Seems like they never do… LOLz!) In a series of comments underneath her IG post, followers slammed the Life of Kylie alum for failing to wear a hair net and other sanitary equipment during her visit:

“Going to find hair in the make up”

“[Does] it include your hair too?”

“We know you cant do that lol”

“Ain’t u suppose [sic] to wear gloves, mask and the hair net thingy???”

Others joked that Kylie was “creating the new pandemic” (oof) and “giving high school science class” with these new promotional pics pushing out her makeup magic:

“In the lab creating the new pandemic”

OK, the science class comment is legitimately funny. Ten points for that one!!

It wasn’t just randos who slammed Kendall Jenner‘s baby sis for the lab look. Well-known makeup artist and cosmetic developer Kevin James Bennett shared his thoughts too, slamming the “ignorant lab” for letting Kylie in to tinker “without following proper sanitation protocols.” Bennett added that the mom of two was “gaslighting” her followers, writing:

“Working with cosmetic manufacturers (and their labs) is part of my job. I have very short hair, and I’ve NEVER been allowed into the lab without a hair net… AND GLOVES.”

OK! We get it. But y’all know Kylie isn’t actually creating the potions herself, right?! She’s there for IG clout! They are going to chuck the beaker she was “working with” as soon as she jumps back on her private jet to fly home! LOLz!

FWIW, Page Six echoed this (unfortunately not obvious?) sentiment in their reporting. On Wednesday night, they published details from a source who told them Kylie “was not on the production floor when the pictures and videos were taken,” and instead was “simply reviewing colors and ideating on new concepts.”

Related: Kylie Is NOT The Celeb With The Worst Private Jet Pollution Emissions!

Yeah, no s**t! Crazy that it needs to be said. It’s just a promo! Kylie may be a lot of things, but she’s smart enough not to create her own version of the Pink Sauce controversy. Come on, y’all!! Maybe people are just looking for any excuse to call out the climate criminal. What do U think?? Sound OFF with your take down in the comments (below)!