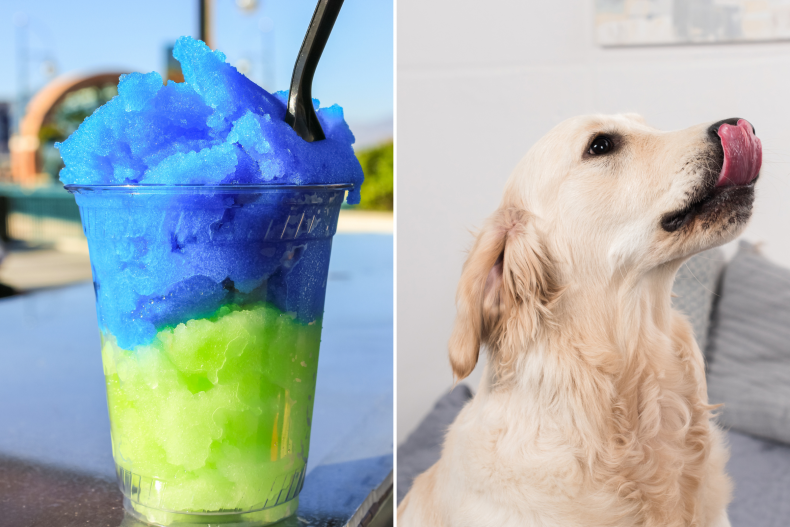 The internet has been left in stitches after seeing the aftermath of one dog’s run-in with a slush ice drink.

Shared on June 15 by Rhonda Meeks Jones on Facebook, the picture was posted alongside the caption: “My large icy was full when I went in the store for two minutes.”

The picture has gained thousands of reactions and more than 130,000 shares on Facebook, and has since been shared on Twitter and Reddit where thousands of internet users have delighted over the picture.

“That’s hilarious,” joked one Facebook user. While another commenter said: “Best thing I have seen today.”

“Innocent until proven guilty,” said one viewer of the viral image. While another commenter said: “I bet you couldn’t even be upset with all that cuteness.”

Newsweek has reached out to Rhonda Meeks Jones for comment.

Dog advice site Rover says that our pups enjoy an icy treat for the same reason we do—they’re a great way to refresh on a hot day.

A slush drink is made with flavored ice, often soda, sugar, and water. When it comes to giving them to your dog, Rover says it is essential to be aware of the ingredients: “Avoid artificial sweeteners as they could contain the dangerous additive xylitol, a sugar alcohol that’s toxic to dogs,” for this reason they say it is important to never give your pet an ice treat labeled “sugar-free.”

“Should of bought two,” joked one commenter on the Facebook post, while another user wrote: “That’s hilarious. I mean he looks like he was trying to be cool about it. Too bad he couldn’t hide the evidence.”

The hilarious image was later picked up by other internet users and was reposted on Reddit where it has received more than 49,000 upvotes and delighted users.

One Reddit user branded the dog a “Slush puppy,” referring to the name sometimes given to the ice drinks.

“Hear me out, he didn’t do it, he is innocent, he is being framed,” said another Reddit user.

Meanwhile, another commenter on the popular site joked: “You can’t prove anything! All evidence you have is circumstantial! I have NOT been caught blue-tongued!”

Another commenter shared a similar experience with a drink-stealing pup and wrote: “I had a McDonald’s Frappuccino with the rounded top. When I looked back my dog was licking all the whip cream out through the little hole in the top.”

Not the only dog to enjoy a cool treat this week, two pups captured viral attention when their different reactions to an ice cream left viewers in stitches.