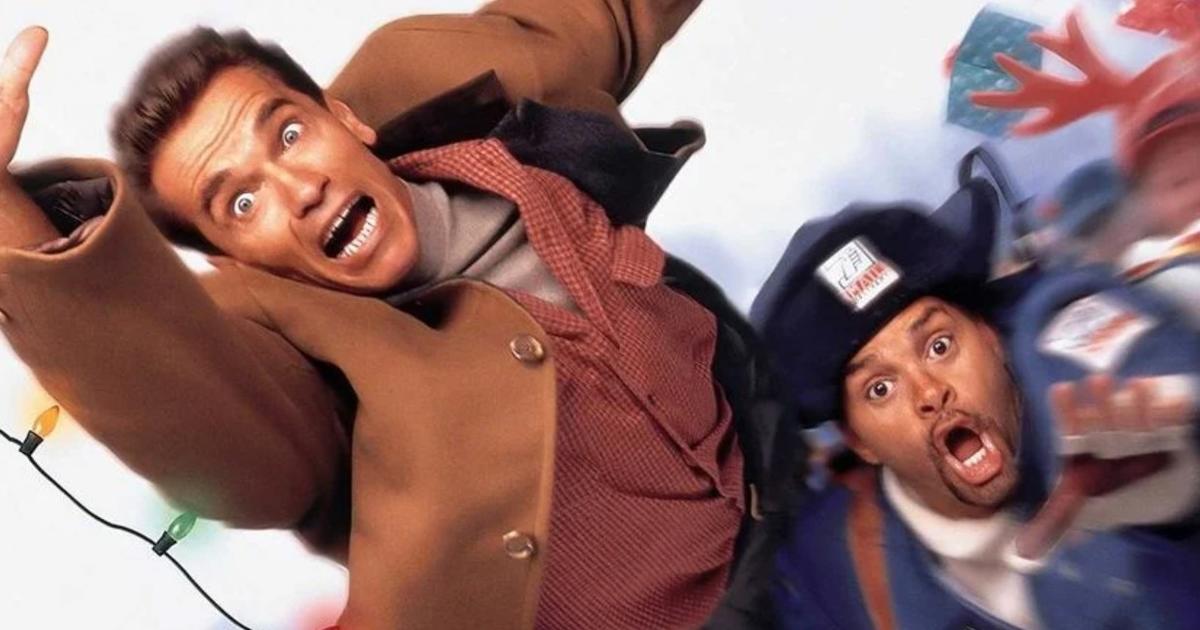 MINNEAPOLIS — On Nov. 16, 1996, Minnesotans flocked to Mall of America for what was the biggest Hollywood movie premiere in state history.

Thousands packed the atrium in hopes of catching a glimpse at one of the world’s biggest movie stars.

“When I left on the last day of filming here in Minneapolis, I said, ‘I’ll be back!’” said Arnold Schwarzenegger, to the throng of screaming fans.

But it wasn’t a “Terminator” film the future governor of California was promoting.

“Jingle All The Way,” filmed primarily in the Twin Cities between April and May of 1996, is the tale of a businessman on an odyssey to find an elusive “Turbo Man” action figure for his young son on Christmas Eve.

Co-starring Sinbad, Rita Wilson, and Phil Hartman (in his final film role), “Jingle” had a budget of nearly $80 million. In 2021 dollars, that figure’s closer to $130 million.

Minnesota was no stranger to film crews and Hollywood stars in the 1990s. According to the state’s film board, MN Film & TV, 69 movies were made in Minnesota between 1990 and 2000, including hits like “The Mighty Ducks” and “Grumpy Old Men.” Joel and Ethan Coen’s relatively low-budget “Fargo,” released weeks before “Jingle” started production, received widespread acclaim and success, and earned two Academy Awards.

But the budget and scale of “Jingle” were unprecedented in Minnesota movie history, and haven’t been topped since.

Andrew Peterson, executive director of FilmNorth, worked as a location assistant on “Jingle.”

“In ’96, they were still like, ‘Where’s the best place to shoot?’ And everybody loved shooting here. They just loved it,” Peterson said. “Just the year prior, we shot, simultaneously, ‘Beautiful Girls’ for Miramax for around $18 million, ‘Fargo,’ and ‘Feeling Minnesota’ with Keanu Reeves.”

“I would scout scripts for the film board, you know, to try and get movies to come here…So I got a call from the film board and they said, ‘Well, I think there’s an Arnold Schwarzenegger movie coming,’” Healy-Shapiro said. “Arnold was the one that made them come here because he loves the Mall of America.”

Three years earlier, the mall became home to one of the Planet Hollywood theme restaurants, of which Schwarzenegger was a very visible stakeholder. (Its Minnesota location closed in 2003.)

Twentieth Century Fox wanted the holiday film, co-produced by “Home Alone” director Chris Columbus, to be filmed in snowy Minnesota. But there was a slight problem.

“They had been prepping it long before they called us, say in January, and they said, ‘You know, we’re prepping this winter movie and, you know, we’re looking at April and May.’ And I said, ‘Well you know, Minnesota has summer, too.’ And they were like, ‘Well, if there’s gonna be snow anywhere in the U.S., the best chance is Minnesota, right?’ And I was like, ‘No, no, we’re not gonna have snow,’” Peterson said. “And then on the first day of shooting, we had a snowstorm. We had that April blizzard that fell on the very first day of the shoot. And we spent the entire morning melting all the snow with a fire truck because we couldn’t maintain that look of snow through the rest of the film.”

“Jingle” was mostly shot around Minneapolis, St. Paul and Edina. The cities were lumped together as the singular “Twin Cities.” Law enforcement characters in the film, and their vehicles, bear “Twin Cities Police” badges and logos.

“If you watched the movie, it’s a postcard for ‘Come to Minnesota,’” Healy-Shapiro said.

Locations and landmarks featured include the skylines, and skyways, of both downtowns; Mickey’s Diner; the Hennepin Avenue Bridge; the State Theatre; the Minnesota Children’s Museum; Seventh Place Mall; Nicollet Island and Pavilion; the studios of KQRS (name-dropped several times); the Minnehaha Creek; the shops of Linden Hills; and Mall of America.

“We had 46 security people [during filming at the mall] because so many people came. I mean like, you know, we were in that round rotunda with the two escalators that do that X, and there were thousands, there were probably like 5,000 people watching,” Healy-Shapiro said. “It was loud. It was, you know, I’ve never seen so many people in that atrium before, it was pretty amazing.”

The St. Paul Pioneer Press reported at the time that director Brian Levant wasn’t too happy with the crowd’s noise and magnitude. The film’s superstar, however, seemed to thrive off the energy supplied by Minnesota gawkers.

“[Arnold] was really fun and he, he kind of like, you know, played to the crowd,” Healy-Shapiro said. “I’m sure he was thrilled that everybody came to watch him.”

The Austrian cigar aficionado even indulged regularly in an act that would get any mall patron booted.

“The entire crew’s saying, ‘Who’s gonna go tell him you can’t smoke in the Mall of America?’” Peterson said. “I ended up going up over to our, the mall representative there, and he was like, ‘Yeah, we’ll just let it go.’”

Schwarzenegger’s smoking inspired other prominent production members to take up the habit during the shoot, and the studio made sure its star could enjoy his fragrant pastime in style — with $60,000 budgeted just for cigars.

“They would start smoking cigars at 9 a.m.,” Healy-Shapiro said.

The location team settled on a picturesque Edina cul-de-sac to serve as the neighborhood for Schwarzenegger’s character.

“We had one big establishing shot where Arnold drives his car and, you know, goes into the driveway. And I told all the people in the houses, I’m like, ‘OK, don’t have any dinner parties.’ So then when we’re doing the shot, I look in every window and everyone has a dinner party, and they’re all looking out of their windows [laughs]!” Healy-Shapiro said.

The neighborhood, and the city, were elated about the movie, but they weren’t expecting the convoy of trucks and trailers required for the shoot.

“[Arnold] had five trailers…he had a cook’s trailer, he had his assistant’s trailer, he had a workout gym, he had his own hair-and-makeup trailer, and then he had his own trailer just for sitting in. So, you know, we went to the city of Edina, I’m like, ‘Yeah…we have five acres of semis we need to park in Edina,’ and they’re like, ‘What?’ [laughs]!” Healy-Shapiro said. “They were really great, and they bent over backwards and everybody in the neighborhood had a great time.”

“Jingle” was released to poor reviews, but it performed well at the box office, and has since become a holiday season staple. (It even spawned a 2014 sequel starring Larry the Cable Guy.)

Nine other Minnesota-made films were released in 1996 alone, but the writing was already on the wall for the state’s industry.

“After Canada introduced production incentives (tax credits and rebates) in 1995, U.S. states followed suit, with Minnesota launching an incentive program in 1997,” Bahan said. “Minnesota’s rebate program was never really competitive as incentives became a driving factor in film and TV budgeting, which meant that Minnesota’s industry has seen a lot of lean years, with many crew and other professionals leaving the state, or getting by working on commercials and the occasional low-budget film.”

As funds and projects dried up, many in the industry headed west.

“The guys that went to L.A., they’re first on the list to get called because they work hard. You know, like the Midwest work ethic, I mean, that’s always been, you know, we don’t complain, and we were problem solvers,” Healy-Shapiro said. “It was really hard to convince the people at the legislature that if we really had a tax credit it would help a lot, and then these movies would come back and spend.”

The Star Of The North Rises Again?

This summer, Minnesota lawmakers agreed on a deal to boost tax incentives for film and TV projects to the tune of $5 million a year, over a span of four years. The previous annual budget was $500,000.

By comparison, Massachusetts, which has a similarly-sized population, offers $100 million annually.

“While it’s a small program relative to others in the country, it’s a starting point for rebuilding the industry in Minnesota,” Bahan said. “So MN Film & TV is focused on the future, attracting film and TV projects to Minnesota, and putting people back to work.”

The dollar amount may seem paltry, but it’s giving local industry veterans hope, and nostalgia for the roaring 90s.

“I feel like we’re gonna start stepping up the number and quality of films, and people will start seeing the stars moving through here again. And kids like Josh Hartnett, and Rachael Leigh Cook, and Charlie Korsmo, they were all discovered,” Peterson said. “Amy Adams, John Carroll Lynch, they have careers because there were movies in Minnesota in the 90s. And they happened to be here for a theater or they grew up here and they auditioned, they got the part and their career took off. And I feel like that’s what we haven’t had these last few years. So for me…that was the fun part of the 90s…you felt like everybody can be discovered, and somebody in Minnesota was gonna be the next star.”

In this article:Mall of America