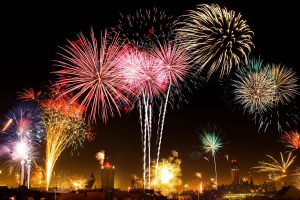 As if fireworks on the 4th aren’t enough of a reason to love July, what about picnics, ice cream, grilling, peaches and baked beans, blueberries and hotdogs? Because July is the national month of all these things, so how can it not be the best?

Because who doesn’t love fireworks? Ok, so some people and select animals aren’t fans, but generally, we all love to “Ohh” and “Ahh” over them. If you love fireworks as much as I do, then don’t miss NAME OF FIREWORKS PIECE 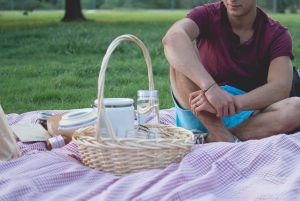 Great food, activities, and friends make for a terrific picnic. Hell, make yourself some delicious snacks and go by yourself if you’re feeling it! Either way, getting outside to eat and enjoy the weather is easily one of the best parts of summer. 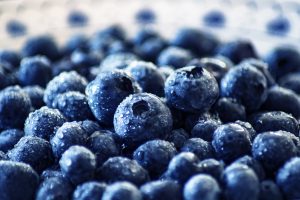 If you’re a fan of these delicious little berries, summer is the time to eat them and in July, they are nationally celebrated for all that they are. Bring them with you anywhere as a snack and enjoy them raw and fresh. Or, use one of these recipes to eat them this month.

After cutting your strawberries and bananas to bite-sized pieces, add the raspberries and blueberries. Drizzle a couple tablespoons of orange juice and stir the fruit around to combine. Serve after preparing.

Another easy and delicious recipe for a blueberries is to use fresh blueberries and dip them into this delicious fruit dip. Mix together a container of cool whip, a box of (prepared) vanilla pudding, and vanilla yogurt. Mix it all together and chill until serving. 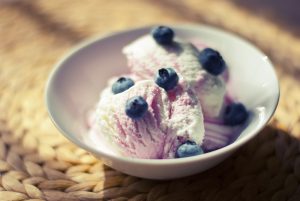 It really only makes sense that the month we celebrate ice cream would be in the middle of the hot, hot summer. 90% of American households eat ice cream and of all the ice cream there is, vanilla comes in at the most popular ice cream flavor. The USA consumes the most ice cream worldwide, followed by Australia and Norway. July is the month to celebrate ice cream, so be sure to have a scoop, make a shake, or even a banana split. After all, I scream, you scream, we all scream for ice cream! 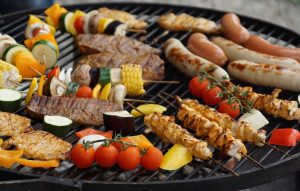 There is really no better time to grill than in the summer, though depending on where you live, people do it year around. (And I’m referring to those crazies in the northern states that like to grill year around, not in the south HA.) Things always taste better when they’re cooked on the grill, and that goes for produce, too. Whether it’s long, delicious spears of asparagus and foil-wrapped potatoes, or grilled peaches and pineapple, smothered in a honey, lime sauce, it will all be delicious. And hey, why not throw a bunch of hotdogs on there. I mean, what’s grilling without some hotdogs? And speaking of hotdogs… 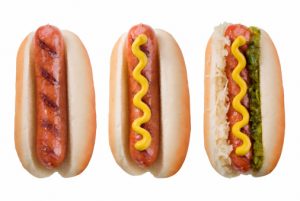 July is also the month to celebrate hotdogs! It works well with all the grilling and picnics happening throughout this season. No one really knows where hotdogs originated, other than as a modern-day twist on the humble sausage. The first hotdogs seem to have been on the scene in the late 1800s at the World Fair. But what we do know about them is that mustard is everyone’s favorite hotdog topping, with ketchup coming in a close second. Apparently, there is even a right and wrong way to consume a hotdog. According to the American meat trade associations official etiquette guide for hotdog eating, crazy, I know, not only is it tacky to top your dog with ketchup unless your under 18 years old, but it’s also considered pretentious to eat your hotdog with a utensil. Also don’t use fancy buns for your dogs, or serve it on anything fancier than a paper plate. With all those don’ts, here are a couple do’s. Eat the whole thing, including the bun, lick any condiments off your fingers, and be sure to eat it with simple drinks and sides. But Hell, it’s national hotdog month, go on and eat a hotdog anyway you please. Including with ketchup and mustard, a gluten-free bun, with a side of baked beans to dip it in, my personal favorite. 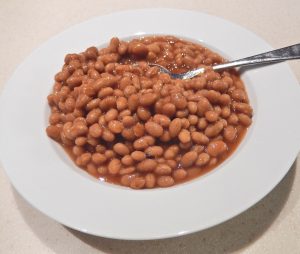 And speaking of baked beans, you guessed it, they are celebrated in July as well. Not only are they a delicious and easy side, whether you’re grilling at home, or picnicking at the beach, but they can also be a part of a recipe as well. Baked beans, butter beans, ketchup, ground beef, brown sugar, and a couple seasonings all come together to make a meaty, beany dish that’s thrown together and also easily made, via the crockpot. 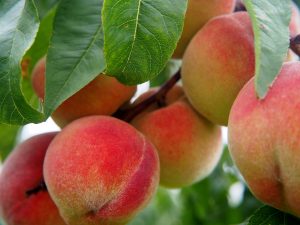 And last but certainly not least, peaches are celebrated in the month of July as well. They are in season during the summer, with their soft skin, and sweet, fleshy insides. There are so many things that you can do with peaches, like cutting them up and throwing them on the grill, for one thing. They are also super yummy in a peach crisp or crumble. And because they are in season now, they are absolutely delicious raw and as is.

Y’all may love August most, but July does it for me. What’s your favorite month of the year?