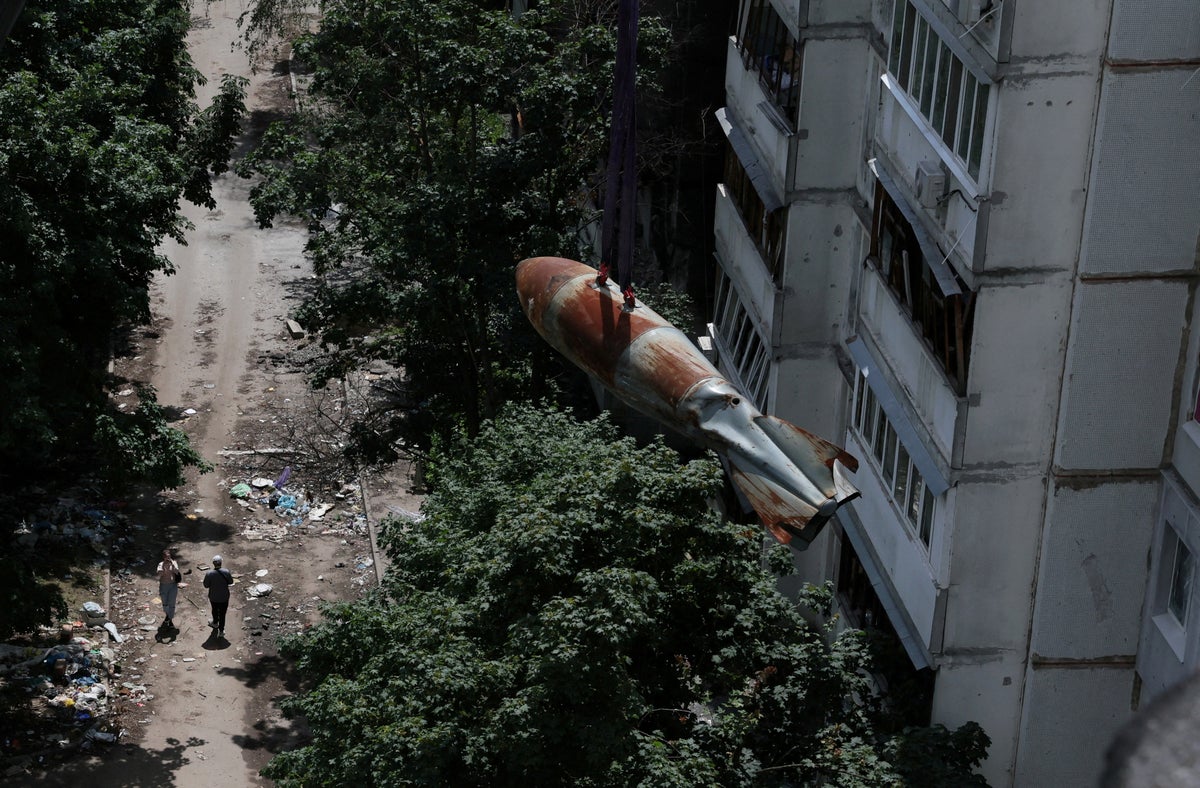 A 500kg unexploded bomb has been removed from the top of an apartment building in Kharkiv, Ukraine.

The huge munition was removed by a 10-man specialist crew on Thursday using a forklift and crane to dislodge it from the nine-storey building.

The bomb was deactivated in March but Ukrainian authorities had been unable to remove it until now due to the Russian airstrikes hitting Ukraine’s second-largest city.

One of the crew members who took the device away said the city “being calm” allowed the team to take away the dangerous explosive.

Footage posted online showed the bomb slowly being winched out of the apartment building by a crane and then gradually placed into a large, heavily fortified truck that is emblazoned with the word “demining”.

Russian airstrikes struck the city again on Tuesday and Wednesday and were the worst for weeks in an area where normal life had been returning since Ukraine pushed Moscow’s forces back last month.

Kyiv characterized the strikes, which reportedly killed at least 20 people, as a bid to force Ukraine to pull resources from the main battlefields in the Donbas to protect civilians.

“There is no letup in the shelling of civilians by the Russian occupiers,” he wrote on the Telegram messaging app. “This is evidence that we cannot expect the same scenario as in Chernihiv or Kyiv, with Russian forces withdrawing under pressure.”

Ukrainian presidential adviser Oleksiy Arestovych said in a video address that Russian forces were hitting Kharkiv to terrorize the population and force Ukraine to divert troops.

The plane — II-76 military cargo aircraft — crashed and caught fire while trying to make a landing in the Russian city.

The Independent has a proud history of campaigning for the rights of the most vulnerable, and we first ran our Refugees Welcome campaign during the war in Syria in 2015. Now, as we renew our campaign and launch this petition in the wake of the unfolding Ukrainian crisis, we are calling on the government to go further and faster to ensure help is delivered. To find out more about our Refugees Welcome campaign, click here. To sign the petition click here. If you would like to donate then please click here for our GoFundMe page.