Throughout the early 20th century, St. Louis, Missouri, was among the most progressive and prosperous towns in America. So what turned the Gateway City into a crime-ridden ghost town?

Until the 1950s, St. Louis, Missouri was a bustling hub of industry. Given its location along the Mississippi River, the Gateway City was relatively tolerant and diverse, and so it became a safe destination for African-Americans during the Great Migration from 1910 to 1970.

Today, however, the historic city resembles a segregated ghost town.

For most of the 20th century, St. Louis was a coveted location for its strong, unionized industrial base. The town was ripe with job opportunities, had a flourishing middle class — and seemed to be a manifestation of the American Dream.

But then, St. Louis experienced economic downturns so staggering that only towns like the now derelict Gary, Indiana, could compare. As the city with the highest murder rate per capita outside of South America, St. Louis is considered the murder capital of the United States — and has lost the most residents of any U.S. city since 1950.

“Churches are doing food distribution, hosting job fairs, serving as vaccine clinics,” said James Clark of the Division of Public Safety. “We are seeing a change in attitude. We need family accountability, we need neighborhood accountability. We cannot heap the responsibility of violence solely on the police.”

So what exactly happened to St. Louis, America’s symbol of progress?

During World War II, St. Louis experienced a major economic boom as factories were retooled and mass amounts of workers were trained for wartime manufacturing. Seen here are ingots being made at the Sullers Steel Company.U.S. War Department/Interim Archives/Getty Images

Police with nightsticks disperse a crowd of 5,000 during a St. Louis race riot spurred by the allowance of Black people to use public swimming pools in 1949.Bettmann/Getty Images

A view of Goodfellow Boulevard, which forms a boundary of high crime and poverty rates known as “Hayden’s rectangle.”Jahi Chikwendiu/The Washington Post/Getty Images

Black Americans required licenses to live in St. Louis for most of the 1800s. They were banned from testifying against white people in court and garnering an education. For decades, they suffered from racist housing restrictions and curfews. Seen here is an African-American settlement of steel foundry workers in the 1920s or 1930s.H. Armstrong Roberts/ClassicStock/Getty Images

A protester cheers as an incinerated business burns to the ground after a grand jury decided not to indict the officer who killed Michael Brown on Nov. 24, 2014.Scott Olson/Getty Images

A beaten man sits on the street as police question a mob that attacked and stoned him during a race riot in 1949. Bettmann/Getty Images

A look inside the final assembly stage at the St. Louis Curtiss Factory three weeks after Japan attacked Pearl Harbor in 1942.Museum of Flight/CORBIS/Getty Images

St. Louis was founded as a fur-trading post by Pierre Laclède Liguest of New Orleans in 1764. It was acquired by the United States as part of the Louisiana Purchase in 1803.Joe Sohm/Visions of America/Universal Images Group/Getty Images

Demonstrators marching through the empty streets of St. Louis during the Ferguson riots on Oct. 13, 2014.Scott Olson/Getty Images

The state of Missouri had an estimated 6,527 people experiencing homelessness on any given day as of January 2020.Spencer Platt/Getty Images

A homeless man named Israel waits for the chance to secure housing in a trailer for $10 per night.Spencer Platt/Getty Images

The Great Migration from 1910 to 1970 saw an estimated six million Black Americans move north in search of a better life. Many chose St. Louis for its robust middle class and abounding job opportunities. Michael B. Thomas/AFP/Getty Images

Anheuser-Busch, which brews Budweiser beers and many others, was founded and headquartered in St. Louis. It was one of the first companies to transport beer across America in refrigerated railroad cars.Joe Sohm/Visions of America/Universal Images Group/Getty Images

When St. Louis police officer Jason Stockley was found not guilty of first-degree murder in 2017 for the fatal shooting of Anthony Lamar Smith in 2011, 160 St. Louis residents were arrested in the first three days of demonstrations.Michael B. Thomas/Getty Images

The 1990s saw gun violence in St. Louis drop substantially. This was largely explained by the ebbing of the crack epidemic and its correlated shootings, as well as increased incarcerations during the administration of President Bill Clinton. Scott Olson/Getty Images

In 2020, St. Louis reached the highest murder rate of any city in the United States with a population of more than 100,000 people.Scott Olson/Getty Images

The passionate hands of a demonstrator and machine gun turret of local police. Scott Olson/Getty Images

Inside The Unparalleled Death Spiral Of St. Louis In 33 Eerie Images

The Early History Of St. Louis

Founded as a fur-trading post by Pierre Laclède Liguest of New Orleans in 1764, St. Louis was named in honor of Louis IX of France. Then Spanish territory, it was retroceded to France in 1800 but acquired by the newly-United States in the 1803 Louisiana Purchase as the seat of Louisiana and Missouri’s governments.

With an influx of German and Irish immigrants, St. Louis became a vital river port for fur-trading expeditions and westward expansion. Even when standardized steamboat travel fell into obsolescence with railroad construction in the mid-1800s, St. Louis persevered as a bustling hub of industry.

Meanwhile, African Americans had yet to be liberated from the iron shackles of slavery. And even those living free were still in danger — even in St. Louis, the city of progress. Black residents needed licenses to live there, were banned from testifying against white people in court, and prohibited from seeking education. They commonly endured housing restrictions and curfews. 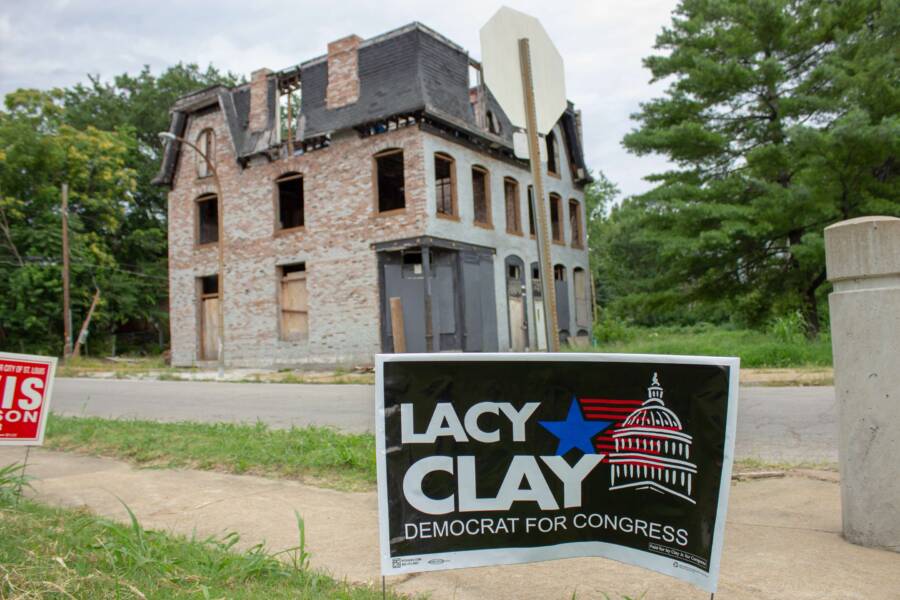 Center for Public IntegrityOf the 129,000 properties in St. Louis, an estimated 25,000 are vacant or abandoned.

When the Civil War broke out in 1864, St. Louis became a Union base controlled under martial law. With the passage of the 13th Amendment that finally abolished slavery on Dec. 18, 1865, St. Louis could be remade as a city of equality.

In 1904, St. Louis hosted the Olympic Games, the first on American soil. The Great Migration began six years later, an exodus that was so unparalleled that when it ended in the 1970s, 47 percent of the nation’s Black Americans lived in the North and West — and in cities like St. Louis.

Inside The City’s Industrialization And Decline

While the Great Depression saw temporary stagnation in the city’s growth, the population otherwise steadily rose. This was in part due to major economic upturns that hit the city with the arrival of World War II, when factories were retooled and massive amounts of workers were trained there for wartime resources.

U.S. Cartridge was based in St. Louis, and it produced more than one billion cartridges during the global conflict and became the largest ammunition manufacturer on the planet. Even the outskirts of St. Louis began to flourish, with restaurants, grocery stores, retailers, and pharmacies. Factories of all sorts popped up, too.

When German immigrants Eberhard Anheuser and Adolphus Busch founded Anheuser-Busch in St. Louis in 1852, they couldn’t have guessed how economically vital the brewing company would be. One of the first to transport beer across America in refrigerated railroad cars, the firm was the largest national brewer by 1957. 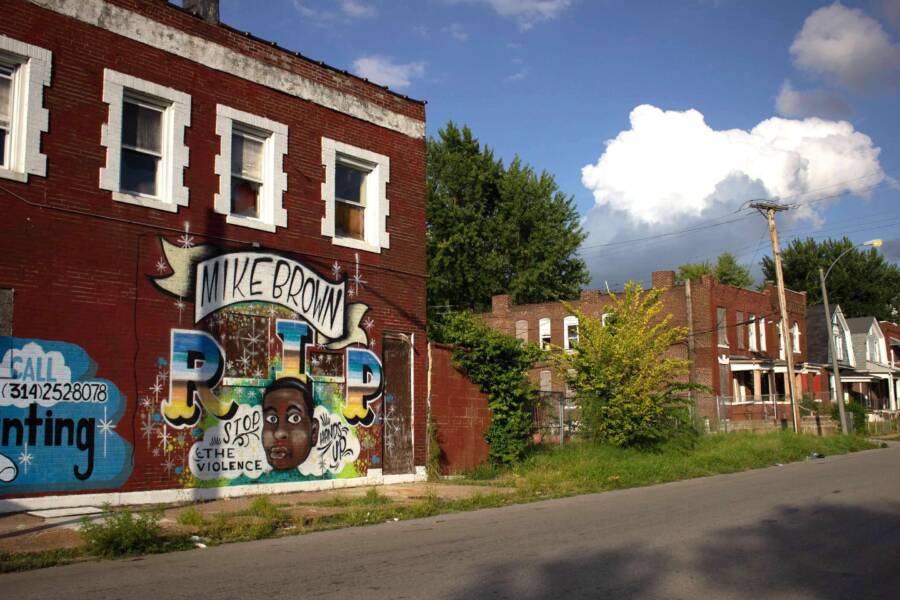 During that time, St. Louis led the nation in food processing, engineering, aviation, advertising, and public relations. It had one of the most educated populations, a completed Gateway Arch by 1967 that bolstered tourism, and a diverse middle class that had weathered economic storms for decades.

At its peak population of 856,796 in 1950, an estimated 13,000 residents inhabited each square mile of the city, with suburban sprawl making up the majority of its living conditions.

But a litany of racist reforms, business practices, and city ordinances have since driven people out of the city. Many of these issues emerged decades earlier, but had long-lasting impacts.

In 1916, for instance, residents voted on an ordinance that prevented anyone from purchasing a home in a neighborhood inhabited by more than 75 percent of another race. While the practice later became illegal, this racial housing segregation saw entire areas of the city left to rot and sowed distrust in the community at large.

Blockbusting, meanwhile, only exacerbated matters. This practice saw building developers convince white people to sell their homes at below-market value by claiming their neighborhoods were being overrun by minorities. Those homes were left standing empty or sold at a profit.

Meanwhile, corporate titans like Anheuser-Busch, Ralston Purina, and McDonnell Douglas were acquired from companies based elsewhere and subsequently moved their headquarters out of the city. With them went thousands of job opportunities.

The economic downturn that ensued ultimately came to a head at the turn of the century — when drugs, gun violence, and a loss of communal identity took hold. “We removed so-called slum neighborhoods,” said Michael Allen, director of the Preservation Research Office. “We have spent enormous sums of public money to spatially reinforce human segregation patterns. We have harnessed architecture as a barrier. And it’s been very frightening to see the result.”

Indeed, only 292,047 residents now remain in the city — clamoring for affordable housing, social safety nets, and an end to police brutality.

The Murder Capital Of The United States

The St. Louis crime rate has certainly fluctuated substantially over the last four decades. Homicides, for instance, had dropped dramatically during the 1980s — but reached unprecedented heights during the following decade. There were 267 murders in 1993 and an average of 70 deaths for every 100,000 people, making St. Louis the murder capital of the U.S.

In 2020, the murder rate in St. Louis hit a 50-year high with 263 homicides. While lower than the 1993 record, the city is also significantly less populated now than it was then.

But Harvard professor Walter Johnson, who wrote a book about the city’s history of systemic racism, is hopeful for the Gateway City’s future.

“St. Louis was a staging post for Indian removal and imperial expansion, and its wealth grew on the backs of its poor Black residents, from slavery through redlining and urban renewal.” He said. “But it was once also America’s most radical city, home to … the nation’s first general strike — a legacy of resistance that endures.”

After learning about how the once-prosperous St. Louis became the murder capital of the U.S., take a look at New York City during the Great Depression. Then, check out 42 staggering photos of abandoned buildings in Detroit.