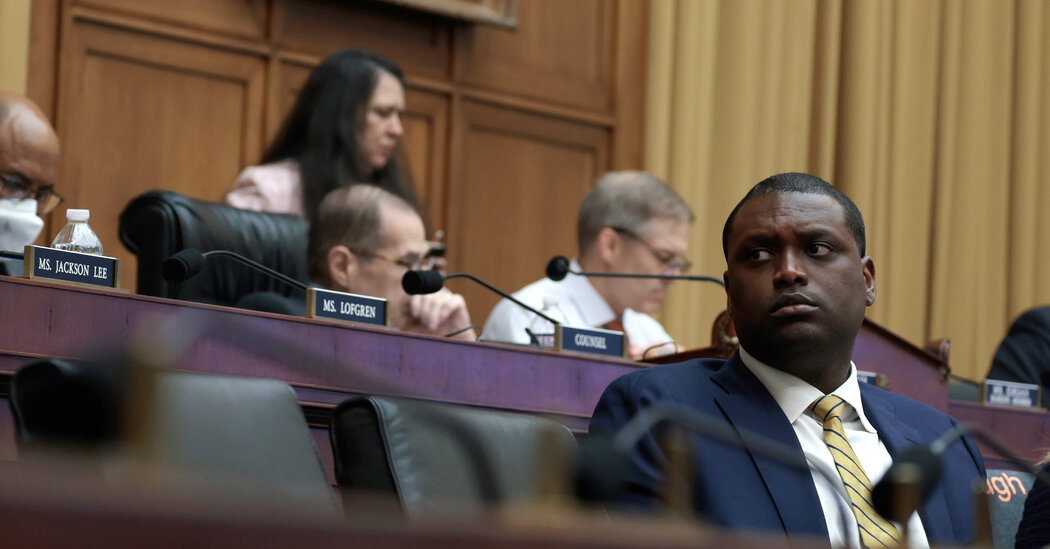 Beneath a maple tree by a red brick elementary school in Brooklyn, a lanky, recognizable figure lingered on a recent morning, hoping to catch the attention of moms, dads, the custodial worker mowing the lawn.

“Registered Democrat?” asked Bill de Blasio, the former two-term mayor of New York City, as he cajoled potential voters to help him get back in the game.

Mr. de Blasio, who once believed he could be elected president, has now set his sights lower, aiming to represent a newly redrawn House district in New York City. But he is far from alone.

Others contesting the seat include a Levi Strauss heir who helped impeach Donald J. Trump; rising stars from the City Council and State Assembly; a Chinese American activist involved in the 1989 Tiananmen Square protests; and a pathbreaking liberal who was the youngest woman ever elected to Congress — 50 years ago.

There is also a sitting congressman currently representing a suburban region, who only recently moved into the district. Exactly when, he couldn’t say.

“Time is a blur,” said the congressman, Mondaire Jones, pivoting away from questions about his new residency, “when you’re fighting to end gun violence in America.”

Nature abhors a vacuum, and so do politicians. So when New York’s redistricting fiasco last month unexpectedly opened up a House seat in a safely Democratic area, stretching from Lower Manhattan through much of brownstone Brooklyn, the political floodgates opened wide.

A total of 15 Democrats, representing a broad range of ages and backgrounds, have taken steps to enter a summertime primary that may prove to be one of the largest and most freewheeling in the nation.

“It’s like a sweepstakes contest,” said Steven M. Cohen, a longtime government official and frequent donor from the district who said he has been inundated with fund-raising requests. “Everyone can potentially be a winner, no purchase necessary.”

The candidates only have until Aug. 23 to win the sympathies of primary voters who represent some of New York’s most politically engaged and diverse neighborhoods: Greenwich Village, Wall Street, Chinatown, Park Slope, Sunset Park and even parts of Borough Park, an ultra-Orthodox Jewish stronghold.

The result is not so much a contest of ideas — almost every major candidate has condemned threats to abortion rights and bemoaned the lack of strict limits on guns — as of brute force, blunt ambition and identity politics.

“Let me start by saying this: I fear no man,” said Mr. Jones, the sitting congressman who decided to try his hand in the reconstituted 10th District, rather than run for re-election in the 17th District or contest the neighboring one to the south. Either option would involve competing against a House incumbent.

Mr. Jones did not have to move to Brooklyn to run for the seat; House candidates must live in the state they represent, but not the district. Mr. Jones, who grew up in Rockland County, contended that his status as a newcomer was irrelevant. He suggested that he is sufficiently tied to the district by virtue of his time living elsewhere in the city and socializing in Greenwich Village, as a young gay man of color trying to discover his “authentic self.”

In any case, he said, regular voters care more about what a congressional candidate has done and whether he can fight for their interests rather than where he hails from or when he moved. (A spokesman later clarified that the move occurred last week.)

“Harping over the length of someone’s residency in a district and lines that were just drawn a few weeks ago is something that the political class, including many journalists, give outsize weight to,” Mr. Jones said.

Jo Anne Simon, a former disability rights lawyer who currently represents parts of the district as a state assemblywoman in Brooklyn, adamantly disagreed as she pitched her own candidacy.

“People vote for people that they know, that they trust and they have reason to know show up,” said Ms. Simon, referencing her decades of activism on local issues like pollution from the Gowanus Expressway. “Nobody here has voted for Mondaire Jones.”

Then again, in such a crowded race, there may be no such thing as home-field advantage.

Take Carlina Rivera, a city councilwoman who lives just outside of the district, and Yuh-Line Niou, another state assemblywoman. Both are up-and-coming progressive women of color representing parts of Lower Manhattan and could end up cannibalizing each other’s base of support.

Ms. Niou said she had more than 600 volunteers eager to carry petitions for her. Ms. Rivera on Friday won the endorsement of Representative Nydia Velázquez, who currently represents much of the new district and is expected to wield substantial sway among voters. She is expected to win re-election in a neighboring redrawn district covering parts of Brooklyn and Queens.

They, in turn, will face off against a progressive rising star from another era, Elizabeth Holtzman, spurred to re-enter the arena by the threat to abortion rights.

In 1972, Ms. Holtzman became the youngest woman ever elected to Congress, when she defeated a 50-year incumbent at age 31. Now, at age 80, she is trying to become the oldest non-incumbent elected to the House of Representatives in history.

In between, she had a trailblazing career as the first woman elected district attorney in Brooklyn and as New York City comptroller, racking up experience that she argues positions her to make an immediate impact in Washington. Still, she has not held elected office since 1993, when several of her competitors were in elementary school.

“Somebody said to me, your slogan should be something like ‘Google me,’” Ms. Holtzman said.

The Chinese American activist, Xiong Yan, who after his role in Tiananmen went on to become a chaplain for the U.S. Army and now believes he can attract a significant number of votes from large Asian populations in Manhattan’s Chinatown and Brooklyn’s Sunset Park.

Voters can be forgiven for being overwhelmed. There was not even supposed to be a primary race in New York’s 10th District until a court-appointed expert so thoroughly scrambled New York City’s congressional map in May that the technical incumbent, Representative Jerrold Nadler, decided to run in the 12th District in Manhattan instead.

That decision set him on a collision course with a longtime ally, Representative Carolyn Maloney, but it also left a rare open seat in Manhattan and Brooklyn — political gold to which no one had a rightful claim.

“Anyone who tells you that they know what’s going to happen in this race, or that there is an obvious outcome, is lying to you and themselves,” said Chris Coffey, the chief executive of Tusk Strategies, who is unaffiliated in the race.

Mr. de Blasio has his claim. He enters the race with near universal name recognition, years of electoral successes and some policy triumphs too — most notably, universal prekindergarten. But Mr. de Blasio does not have a fund-raising advantage. That belongs to two other candidates.

As of March 31, Mr. Jones had $2.9 million on hand — a huge sum in a race so short it will make fund-raising difficult. Last week, he dropped his first in an expected deluge of television advertising, a placement of at least $169,000, according to Ad Impact, an advertising analytics firm.

Daniel Goldman, the chief investigator for House Democrats in the first impeachment of Mr. Trump, and a frequent legal analyst for MSNBC, is running on his record fighting for democracy and public safety.

He is also a former federal prosecutor who spent a decade working in the Southern District of New York, a lesser-known part of his résumé that may help him stand out with voters as the city confronts what Mr. Goldman called “the biggest public safety crisis in decades.”

“The core experiences of my professional career, which has been devoted entirely to public service, happen to be very timely for the circumstances we are in now,” he said in an interview.

Still, he is a relative newcomer to electoral politics and starts the abbreviated race with few of the institutional relationships other candidates will draw on. To try to make up the difference, Mr. Goldman, the Levi Strauss heir who rents a Tribeca apartment listed for sale for $22 million, said he was prepared to “put some of my own money into this to level the playing field.”

But given the timing of the contest, and its brevity, the race is also widely expected to turn on get-out-the-vote efforts, which may help candidates like Ms. Niou.

“Field is the most important thing,” she said. “We’re running against folks with 100 percent name recognition.”

Labor unions and outside political groups could also help turn the race. The retail workers union has endorsed Mr. Jones. Aspire PAC, an outgrowth of the Asian American and Pacific Islander Members of Congress, has been reviewing candidates and will make a decision soon, according to Grace Meng, the Queens congresswoman and PAC chair. It remains unclear if other unions will engage.

It is also difficult to gauge how many voters will be in the district in late August, when the city gets torrid and all those who can, leave town. Matthew Rey, a prominent Democratic consultant who is unaffiliated with any of the campaigns, estimated voter turnout could be between just 70,000 and 90,000 in a district of 776,000 residents.

Given the overcrowded field and the late summer election date, the race is hard to pin down.

Last week, after dropping off his two children at school in Windsor Terrace, Brooklyn, Nicholas McDermott said he would absolutely consider voting for Mr. de Blasio.

“I think it’s great to have someone with experience who’s from the area,” Mr. McDermott said.

He was less certain if he would be around in August to vote.

“That’s a good question,” he said.