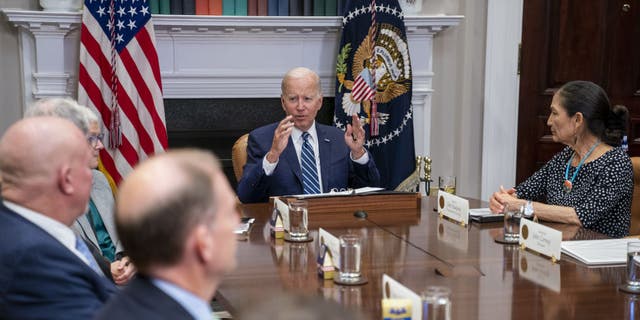 SEAN HANNITY: The mayor, the governor, let’s see. The vice president. The president, they’re all protected by people that have guns. Media mob Democrats are predictably upset, but the Supreme Court is functioning properly. Unfortunately, we can’t say the same for the other two branches, for example, over at the White House. Well, your president, Joe, is having a really hard time with basic tasks. Here we go again. Take a look at a screen. Apparently, the White House staffer. Look at that right there. They had to create this set of instructions for your president for his meeting today. That thing there, it reads, quote, “You enter the room, you take your seat, you give brief comments. You thank participants. You depart.” The only thing missing was you breathe in and you breathe out. Don’t forget to breathe, Joe. And if you’re really good, we’ll give you an extra scoop of ice cream.

US President Joe Biden speaks while meeting with governors, labor leaders, and private companies launching the Federal-State Offshore Wind Implementation Partnership in the Roosevelt Room of the White House in Washington, D.C., US, on Thursday, June 23, 2022. The new partnership focuses on boosting the offshore wind industry to grow American-made clean energy, according to the White House. Photographer: Shawn Thew/EPA/Bloomberg via Getty Images

This article was written by Fox News staff.