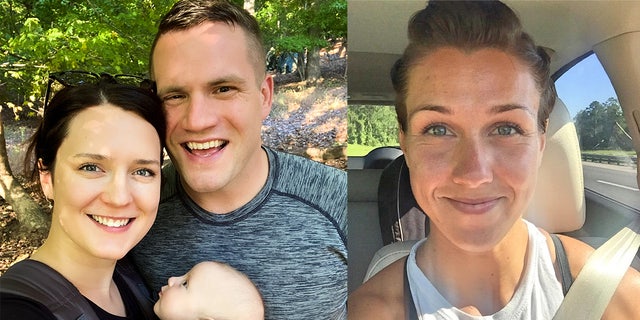 EXCLUSIVE: A Florida tattoo parlor staffer said the Mormon ex-wife of slain Microsoft executive Jared Bridegan asked if he knew anyone who could “shut him up” in 2015 — after undergoing a surprising “enhancement” on her genitals.

Shanna Gardner-Fernandez, 35, was in the process of divorcing Bridegan at the time — but they were still living under the same roof with their twins in Jacksonville Beach, Florida, when he said she made the comment.

A photo combination of Kirsten and Jared Bridegan with their daughter London and his ex-wife Shanna Gardner-Fernandez.
(Fox News Digital)

“She had been talking to us about her divorce, and she told us her life could just be better if he could just ‘shut up’ and asked us if we knew anybody that could ‘shut him up,’” recalled the employee of a 2015 dinner at the Flying Iguana, a local Mexican restaurant.

“I did not take it at the time as anything nefarious,” he added. “In hindsight, I can see how that can be taken differently now.”

Detectives on the case interviewed the Jacksonville tattoo worker last Thursday. He asked that his name be withheld to protect his job.

The employee said he became friends with Gardner-Fernandez after she came to his shop for a clitoris piercing, according to a waiver she signed for the procedure.

Bridegen, 33, was gunned down Feb. 16 in Jacksonville Beach in front of his 2-year-old daughter after dropping off his twins at his ex-wife’s house. He had been locked in almost constant litigation with Gardner-Fernandez since she filed for divorce in 2015. He later married Kirsten Bridegan, and they share Bexley, 2, and London, 1.

A photo combination of Shanna Gardner-Fernandez’s liability waivers taken at a tattoo parlor in 2015 in the span of three months, showing a dramatic transformation.
(Fox News )

He was on his way home with Bexley strapped in the car seat when he encountered a tire in the road. As Bridegan stepped out of his black Volkswagen Atlas, an unknown assailant shot him and fled.

Jared Bridegan was a devout member of the Church of Jesus Christ of Latter-day Saints, also known as the Mormon church. He married his first wife in a 2010 fairytale wedding at the Salt Lake Temple in Utah. But Gardner-Fernandez, who’s from a prominent and wealthy Mormon family, stopped going to church, then allegedly had an affair — triggering the acrimonious divorce.

Her parents, Sterling and Shelli Gardner, founded the paper-craft company Stampin Up!, which has an estimated annual revenue of over $100 million a year, according to IncFact.

Fox News Digital obtained the liability waivers that Gardner-Fernandez signed on an iPad each time she had a service, stating the desired “enhancement,” her address and an emergency contact. The document also includes a real-time photo taken on the iPad to verify her identity.

Shanna Gardner-Fernandez poses with her husband Mario Fernandez and her twins from her marriage to Jared Bridegan.
(Facebook)

Under the heading “description of your piercing” from the Feb. 24, 2015, waiver, Gardner-Fernandez wrote “clit.” She returned to the shop for an upper ear-piercing and again for a navel piercing — all in the span of a few months, according to documents reviewed by Fox News Digital.

The worker said he used to live in Utah and had Mormon roommates, and so he and Gardner-Fernandez struck up a fast bond. She frequently stopped by the parlor just to hang out and often vented about her soon-to-be ex-husband, complaining that he was “trying to take all of her money,” the employee recalled.

Her parents financially supported the couple before the divorce — including a monthly stipend of $8,500 a month, according to court papers.

Although a “vaginal piercing” is a common request, the employee said he was stunned that she had gotten that procedure on “day one” when she came in “looking like a regular mother.”

In a matter of weeks, she underwent a dramatic transformation, he said.

“She went from this goody two shoes girl to this wild lady,” he said, noting the waiver photos that illustrate the change. “I just remember thinking, well, this is a changed woman.”

Matteo Cina contributed to this report