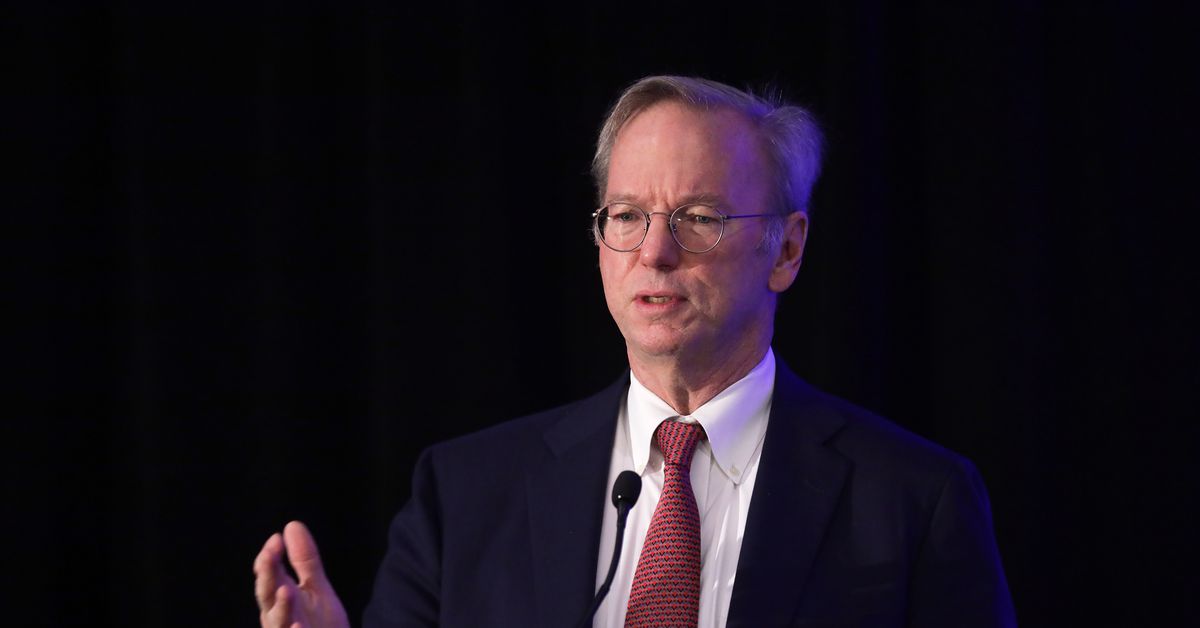 Ex-Google CEO Eric Schmidt is an example of how you can shape public policy without ever running for office.

A few months ago, the revelation of Schmidt’s deep involvement with the White House Office of Science and Technology Policy raised ethics concerns as some questioned if it was appropriate for a tech billionaire to fund a government office that advises the president on tech policy.

Now, Schmidt, who has long been a go-to liaison between the tech industry and the military, is expanding his influence over US national security by helping fund a new investment fund called America’s Frontier Fund (AFF), according to a report by the Tech Transparency Project (TTP), the research arm of the nonprofit ethics watchdog Campaign for Accountability.

America’s Frontier Fund isn’t your ordinary venture capital fund. In a leaked announcement draft obtained by TTP, AFF described itself as the first “public-private, deep-tech fund” in the US, meaning it would receive government funding alongside private money. After Recode followed up, the fund said the draft “was not approved and was never meant to be released. We do not describe ourselves that way. We only describe ourselves as a ‘non-profit deep tech fund.’”

AFF said that, to date, it has not yet received money from the government, but that it has responded to a request for information from the Department of Commerce about a semiconductor fund, which can be an early step in the process to receive funding from the government.

“We still don’t know exactly how AFF will be run,” Katie Paul, director of the Tech Transparency Project, told Recode over email. “But it seems highly unusual for a billionaire to establish a venture capital fund for the purpose of steering taxpayer money into private companies.”

“The question is, where does the money come from?” said Jack Poulson, executive director at Tech Inquiry, a tech accountability nonprofit that tracks ties between Silicon Valley and the US government, particularly in the military and intelligence sectors.

What we do know is that on top of any potential government funding, AFF would use private and philanthropic funding to “help the United States and other democratic nations to develop critical technologies for collective prosperity and economic competitiveness,” an AFF spokesperson told Recode. That’s a priority that the US government shares — last year Congress passed the United States Innovation and Competition Act of 2021 in an effort to bolster the nation’s ability to compete against China. Schmidt has been vocal about tech competition with China being a national security concern.

Schmidt is conspicuously missing from the AFF website. AFF told Recode that Schmidt is not on the board of directors and would have “no involvement” in investment decisions. But many AFF leaders who do appear on the website have worked closely with Schmidt before. Schmidt Futures CEO Eric Braverman is on AFF’s board of directors. Jordan Blashek, AFF’s president and COO, has worked at Schmidt’s philanthropic foundation, Schmidt Futures, for many years in various executive roles.

“AFF was originally Jordan’s idea, and he stepped down from his full-time role at Schmidt Futures to co-found the organization with Gilman Louie in September 2021,” said an AFF spokesperson. He is still at Schmidt Futures as an executive-in-residence.

In a statement to Recode, a Schmidt Futures spokesperson said, “As a philanthropic initiative, our mission is to bet early on exceptional people making the world better. We support many philanthropic efforts that mobilize networks of technical talent to solve hard problems in science and society. AFF’s work is aligned with our mission and we are proud to support the nonprofit — which is an independent entity in its structure and governance.”

Perhaps most interesting is Schmidt’s connection to AFF CEO Gilman Louie. Louie was one of 15 commissioners on the National Security Commission on Artificial Intelligence (NSCAI), where Schmidt was chair. From 2018 to 2021, the commission developed policy recommendations on how AI could be used to promote US national security. Their work was influential; the Department of Defense has adopted several of its recommendations. Poulson noted that Schmidt’s work on the AI commission could be summed up as “government-sanctioned lobbying.”

Louie’s past experience is likely useful for AFF’s ambitions. He was the first CEO of In-Q-Tel, the CIA venture capital fund that uses agency funding to invest in promising new tech that could be applied to the intelligence sector, whose structure AFF appears to be imitating. In-Q-Tel’s potential conflicts of interest have been well publicized. “More than half its trustees were alleged to have had financial ties to the companies in which the fund invested,” Paul said.

Now observers are concerned that AFF’s board of directors could have similar financial ties with companies it invests in, and that this will create rife opportunities for conflicts of interest. Schmidt is a major funder of tech and defense startups, with a special interest in AI. He’s an investor and chair of Sandbox AQ, an AI software development company spun off from Google’s parent company, Alphabet — and In-Q-Tel recently announced it was backing Sandbox AQ, saying it hopes to eventually sell the software to US intelligence agencies.

AFF acknowledged that Schmidt and Louie have had a professional relationship over the past decade. “Gilman is proud to have worked with Eric on key national security matters, as well as with other great private-sector leaders on those commissions,” a spokesperson said.

AFF’s board of directors also has a blend of tech executives, venture capitalists, and former defense officials, including former Secretary of Defense Ash Carter. Getting an investment from AFF’s well-connected committee could be a significant advantage for startups.

“The US government’s seal of approval can make or break a defense startup,” Paul said. “It’s unclear if there are any safeguards to prevent AFF’s roster of former government insiders from using public funding to benefit their own, potentially lucrative investments,” she continued. Observers like Paul are concerned that profit AFF leaders pocket from successful investments could be made possible at least partly through public funds.

AFF told Recode that it had “intentionally structured” itself as a Delaware 501(c)(3), a tax-exempt nonprofit organization that has to disclose financial information to the IRS, in order to ensure transparency.

“All of AFF’s investments will be made by an investment committee with clear conflict of interest and ethics rules requiring disclosure and recusal, and all investments must fall under the charitable purpose of the organization,” an AFF spokesperson added.

The fund said it intended to conduct annual audits that would, among other things, examine whether it was adhering to its own conflict of interest and ethics rules. It described the IRS’ disclosure rules as “robust,” but while 501(c)(3)s do have to file a Form 990 every year, they do not have to disclose the identity of their donors.

The revolving door is spinning faster

At the heart of the issue is an unelected billionaire having such intimate access to government insiders and policymakers.

While this is not entirely unusual — the government regularly receives advice from consulting firms and appoints members of the private sector to sit on independent commissions, such as the NSCAI — Schmidt’s government connections are especially plentiful.

In addition to chairing the NSCAI, he also chaired the Defense Innovation Board, an independent advisory that makes recommendations to the Defense Department on bringing tech innovation to the military. Schmidt was also recently appointed to the National Security Commission on Emerging Biotechnology.

Over the years, Schmidt has basically been invited to observe the inner workings of the defense department. A 2019 ProPublica report on Big Tech’s increasing entanglement with the US military noted how the Department of Defense had become “unusually deferential to Schmidt” under Jim Mattis’s leadership. The revolving door of industry people coming to work for the Pentagon, and vice versa, has been well documented by the watchdog group Project on Government Oversight — but Schmidt has become a standout adviser to the Defense Department.

“The extent to which Schmidt — a business executive with no background in government or the military — has embedded himself in the US defense apparatus is extremely unusual,” Paul said. “He had unparalleled access to the Obama White House and his influence has continued in the two administrations since.”

AFF told Recode that the US federal government needs to be modernized, and the insights of private sector experts like Schmidt will get it there faster. “Eric Schmidt has been called on by both parties, like many other business and technology leaders, to serve in advisory roles to the US government,” AFF said.

It’s worth noting that other Silicon Valley CEOs have enjoyed access to the White House, and Big Tech companies like Amazon and Microsoft have contracts with the defense department. But the degree to which Schmidt is embedded in conversations around the future of US military tech is remarkable. As a New York Times piece outlined, after being appointed to the Defense Innovation Board, Schmidt toured around 100 US military bases around the world.

“When Eric Schmidt advises the US government to do something, we don’t know whose interests he has in mind. Is it Google’s, the US public, or his own?” Paul said.

Earlier this year, Schmidt’s ties to the White House science and tech office prompted controversy. But Schmidt’s coziness with the current presidential administration hasn’t been limited to the OSTP. Employees of a Schmidt-backed startup called Rebellion Defense, which creates AI software for the defense industry, were named to President Biden’s transition team despite the startup being relatively unknown at the time, as it had only just launched in 2019. It has already won several government contracts. (Nick Beim, another Rebellion investor, is also on the AFF board of directors.)

The tangled web of relationships surrounding Schmidt and AFF offer a glimpse of the dizzying revolving door between the tech industry and government that exists today. “I think it’s understood by anybody in this space that these defense officials want to be on the boards of the tech defense companies,” Poulson said. “It’s a fairly consistent theme, if you attend defense tech meetings, that they’re trying to reclaim the idea of the revolving door as a positive, without ever using that term.”

“There’s essentially never any discussion of conflict of interest,” he continued.

Earlier this week, Schmidt spoke at the 2022 DoD Digital and Artificial Intelligence Symposium, a two-day meeting of “thought leaders from across the national security enterprise to discuss themes critical to accelerating DoD’s adoption of data, analytics, and AI to generate decision advantage.”

For the US government, modernizing the tech it relies on is a priority, whether it’s in defense or in processing tax returns. Bringing in experts who have led tech companies might be extremely appealing. But having so little oversight on the conflicts of interest that are arising is undemocratic.

Schmidt seems conveniently positioned at a crossroads where the tech industry can rub shoulders with the US government. The launch of AFF will likely only deepen Schmidt’s already considerable sway over the nation’s tech agenda. “This is an ethics disaster waiting to happen,” Paul said, “and an example of what happens when we let billionaires run our government.”

Correction, June 9, 7:45 pm: An earlier version of this story misidentified America’s Frontier Fund as a firm; it is an investment fund. An accompanying headline referencing the Eric-Schmidt-backed fund has been changed to better reflect the scope of his influence.