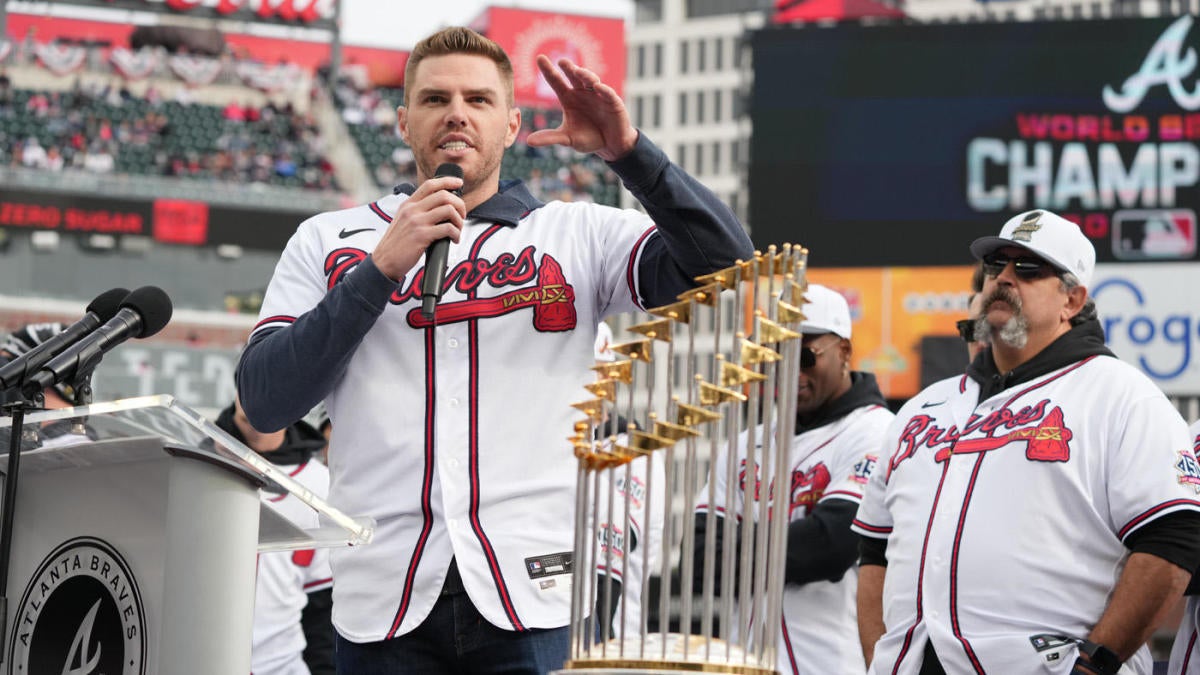 The Los Angeles Dodgers visit the Atlanta Braves for a three-game series this weekend, starting Friday night in Truist Park. It’s a rematch of the 2021 NLCS — and actually 2020 as well. Might this be a preview of the third-straight league championship series between these two NL titans? Perhaps.

Here’s the schedule for the series with the pitching probables.

The biggest story is, of course, the return of long-time Braves star Freddie Freeman.

Drafted in the second round out of high school in 2007 by the Braves, Freeman finished second in NL Rookie of the Year voting with the club in 2011, played on a few contenders, was around during a teardown and rebuild and then was a team leader up through the World Series championship in 2021. In his time with the Braves, he was a five-time All-Star, three-time Silver Slugger, a Gold Glover and an MVP. He ranks 12th in franchise history in WAR behind 10 Hall of Famers, plus Andruw Jones and Dale Murphy.

Freeman, though, signed a six-year, $162 million deal with the Dodgers in the offseason. This will be his first time playing in front of the Atlanta fans as the “enemy,” though we can expect a big ovation for his first plate appearance.

Here are some more items of interest.

From April 18-20, the Dodgers took two of three from the Braves in Dodger Stadium. There was a feel-good moment with Freeman’s son running to hug Braves shortstop Dansby Swanson and then Freeman homered in his first at-bat. Former Dodgers closer Kenley Jansen — now with the Braves — got a nice welcome from the Dodgers, too. Jansen would record the save in the middle game of the series.

I guess technically there was one more box to be checked. When the Braves visited L.A. earlier in the season, Braves superstar Ronald Acuña, Jr. wasn’t back off the injured list yet. Remember, he tore his ACL last July and then the Braves went on an improbable run to the title without him.

One might also recall right before the beginning of this season, Acuña made some comments on his relationship with Freeman that drew great attention. He later downplayed them and said they were exaggerated while Freeman didn’t say anything derogatory about Acuña in response.

Not that he’s the only reason to watch the Braves. From veterans Austin Riley and Dansby Swanson to youngsters William Contreras and Michael Harris to a lot of the pitching staff, well …

The Braves are surging

The World Series hangover went through May. After two straight losses to the Diamondbacks, the Braves were 27-31, 10 1/2 games out of first and fives games away from playoff position as the calendar turned to June.

They would win 14 in a row to start the month. After two losses, they’ve now won four of five, pushing them to 18-3 with a +63 run differential. If they started the season like this, there would be premature “best team ever” discussions.

As things stand, they are still four games behind the Mets, but hold the second wild-card spot and absolutely have the look of a playoff team. There were some misguided folks out there naysaying their winning streak since it came against only sub-.500 teams. First off, they won every single game. Beating up on weaker teams is only a worthy discussion point when a team is winning something like six out of 10, not 14 straight. This is baseball and anyone who knows how the sport works realizes that 14 straight  anytime is amazing. Secondly, the Braves just took three of four from a Giants team that had won seven of nine and was nine games over .500 coming in.

The point is that this is a strong team playing its best baseball of the year right now.

The Dodgers were in a mini-funk

When you’ve established a baseline level of greatness, it’s the expectation that the team will always perform like that. As such, when the Dodgers have a stretch with as many losses as wins, it raises the eyebrows a bit. From May 30-June 12, the Dodgers actually went 4-9. They then won two games against the Angels, but lost two of three at home to the Guardians. They had a losing record in the month of June and are now neck-and-neck with the Padres in the NL West race.

They are much better than this and every team goes through funks, but that doesn’t make it any less noteworthy.

Anyway, I said “were” there in the subhead because they just swept the Reds in three games and outscored them 26-11. Yes, it was the Reds and they are one of baseball’s worst teams this season, but sometimes that’s all it takes to get a great team going. Just look at the Braves and how their winning streak started.

Something to watch: Max Muncy, Justin Turner and Cody Bellinger all had big games on Thursday. They’ve collectively ranged from brutal (Muncy) to sub-par this season. If, somehow, those three all got hot at the same time, this Dodgers lineup becomes the most dangerous in baseball.

This is setting up to be an excellent weekend of baseball.