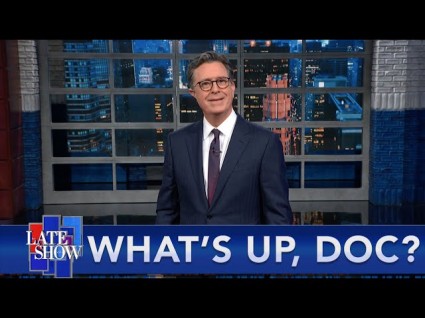 Stephen Colbert, like almost everyone else in America, have been talking about the J6 hearings and the jaw-dropping facts that have been coming out from them. This week, the star of the show was Ron Johnson, Wisconsin’s dumb senator. Colbert broke the news that “most historians consider Ron Johnson in history to sit in the US Senate.

But then, Colbert went one step farther and pointed out what RoJo’s true callings are – delivery mule and role model of not how to go through life.

“So, he has no idea where it came from, no idea who gave it to them, no idea what it is, but he can’t wait to hand-deliver it to the second-in-command. There could’ve been anything in that envelope, he doesn’t care: fake electors, angry bees, naked pictures of Mary Todd Lincoln. It don’t matter to Ron! He’s just a delivery boy.”

I would point out that RoJo did a tremendous favor for the Democratic GOTV cause. I know that I’ll be extra excited to vote RoJo out this fall.