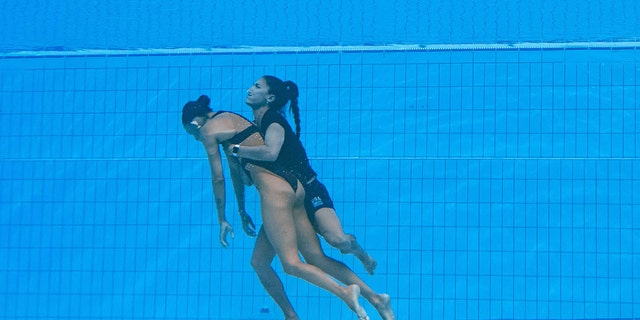 The coach for U.S. artistic swimmer Anita Alvarez reportedly jumped into action on Wednesday when the athlete fainted while performing at the World Championships.

Coach Andrea Fuentes dove into the pool with all her clothes on and grabbed Alvarez who was sinking to the bottom of the pool. When she got the swimmer to the side of the pool with the help of another person Alvarez wasn’t breathing.

Coach Andrea Fuentes (R) rescues the U.S.’s Anita Alvarez (L), from the bottom of the pool to rescue her after she passed out at the Budapest 2022 World Aquatics Championships in Budapest on June 22, 2022.
(Photo by OLI SCARFF/AFP via Getty Images)

Alvarez had just finished her solo free event at the competition in Budapest.

Fuentes called Alvarez’s swim her “best performance ever” in an Instagram post Wednesday night, adding, “she just pushed through her limits and she found them.”

Anita Alvarez of the U.S. receives medical attention during the women’s solo free final at the FINA World Championships in Budapest, Hungary, on June 22, 2022
(REUTERS/Lisa Leutner)

The coach noted that athletes sometimes pass out or barely finish their races in running and cycling. “Our sport is very hard too.”

Alvarez plans to compete in Friday’s team event, Fuentes said, according to The Guardian.

“It was a big scare,” Fuentes reportedly told Spanish newspaper Marca. “I was scared because I saw she wasn’t breathing, but now she is doing very well.”

Anita Alvarez of the U.S. performs during the women’s solo free preliminary at the FINA World Championships in Budapest, Hungary.
(REUTERS/Marton Monus)

Alvarez is competing in her third world championships and reportedly Fuentes has dived into the competition pool once before when she fainted.

“I’ve seen it happen to her before,” her mother told WIVB-TV after she saw Alvarez faint during Olympic qualifying a year ago. “Never in competition, though. I knew right away. On their last element, I could tell something was up.”