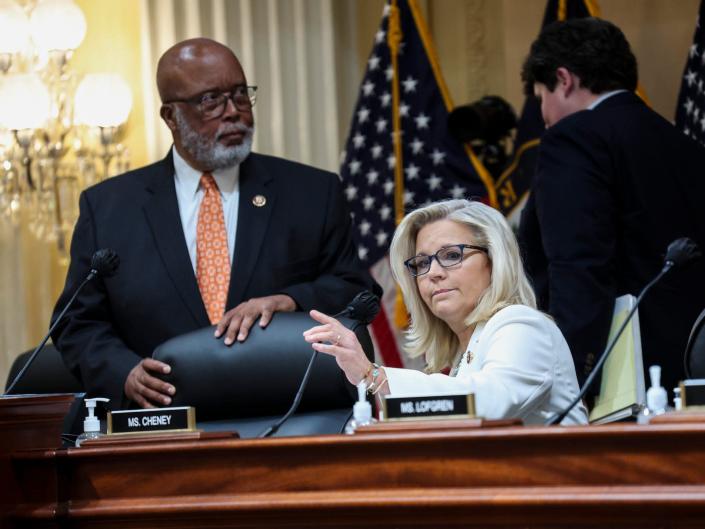 At least 6 Republican members of Congress have now been publicly identified as pressing the White House under President Donald Trump to give them pardons in the aftermath of the January 6, 2021, riot at the US Capitol, former Trump aides revealed in testimony to the House panel investigating the deadly insurrection.

GOP Reps. Andy Biggs of Arizona, Mo Brooks of Alabama, Matt Gaetz of Florida, Louie Gohmert of Texas, Marjorie Taylor Greene of Georgia, and Scott Perry of Pennsylvania all asked Trump to pardon them for helping him try to overturn the 2020 election, the former White House aides said in a series of taped statements presented Thursday on Capitol Hill.

Trump White House aides John McEntee, Cassidy Hutchinson, and Eric Herschmann mapped out how the GOP House lawmakers — most of whom have already been subpoenaed by the select committee — asked for legal cover from future prosecution in a montage of clips the January 6 select committee played during its fifth public hearing.

The list of identified members may still grow too. Committee staff posted an image of an email Brooks sent administration officials, the subject being “Pardons.”

In it, Brooks says he’s writing on behalf of Gaetz, and urges Trump to “give general (all purpose) pardons to the following groups of people: Every Congressman and Senator who voted to reject the electoral college vote submissions of Arizona and Pennsylvania.”

Gaetz did not refute the charges, writing on Twitter only that the select committee is “an unconstituional political sideshow.”

The House GOP lawmakers named as pardon seekers came near the end of Thursday’s hearing after January 6 select committee co-chair Liz Cheney teased the disclosure at the session’s start.

“At the close of today’s hearing, we will see video testimony of three members of Donald Trump’s White House staff. They will identify certain members of Congress who contacted the White House after January 6 seeking presidential pardons,” the Wyoming Republican said Thursday during her opening remarks.

Cheney had already named Perry during the panel’s first hearing that investigators had uncovered evidence of sitting members of Congress lobbying the embattled former president to clear them of any wrongdoing before leaving office.

Perry, who has been subpoenaed by the committee regarding his interaction with former Justice Department official Jeff Clark, denied the accusation.

“The notion that I ever sought a Presidential pardon for myself or other Members of Congress is an absolute, shameless, and soulless lie,” Perry wrote on social media.