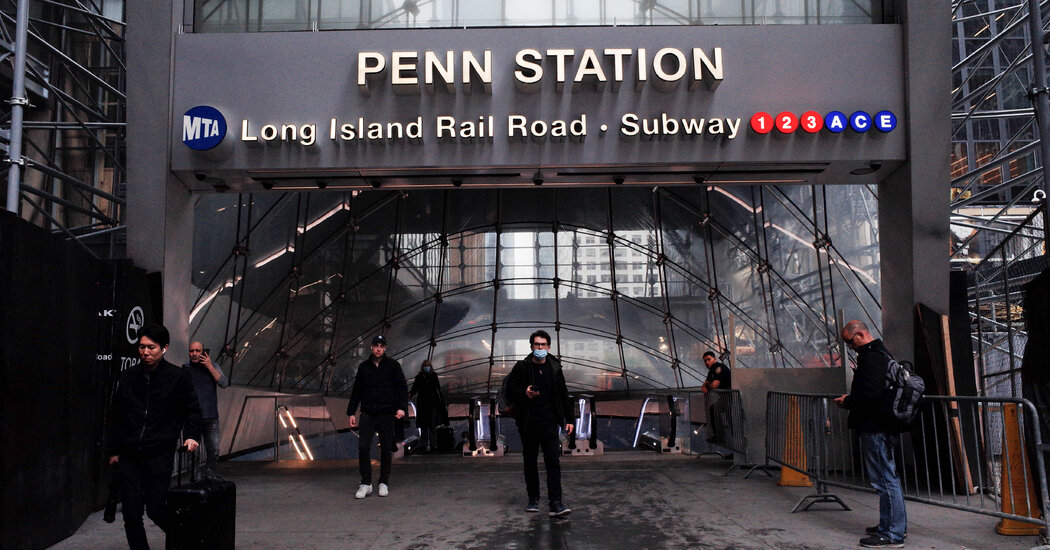 Nearly everyone agrees that something must be done to fix the chaos at Pennsylvania Station in New York City, the nation’s busiest transit hub. Now comes the hard part of devising a solution that will steer clear of controversy.

Amtrak, the national railroad that owns the station and the tracks that run through it, is moving ahead with a plan to expand the station at an estimated cost of $12 billion. That plan envisions demolishing an entire block of Midtown that is home to a 151-year-old church.

On Thursday, Amtrak awarded a contract for the design of the station expansion, which it expects will take two years and as much as $73 million to draw up.

But that effort comes just as a separate New York State plan to renovate the existing station has run into opposition from community leaders.

The Amtrak expansion is part of a comprehensive program of rail infrastructure improvements known as Gateway. The centerpiece of Gateway would be a new pair of one-track tunnels under the Hudson River between Penn Station and New Jersey.

The new tunnels would supplement a parallel pair of tunnels that were built more than 110 years ago and are still damaged by flooding during Hurricane Sandy in 2012. Eventually, Gateway could double the trans-Hudson capacity, with the goal of making the commute into the city more efficient and reliable for riders of New Jersey Transit and Amtrak trains.

But Penn Station’s 21 tracks and platforms were already overloaded before the pandemic. For Gateway to serve its purpose, the station would have to have more tracks. Finding a place to put them in the middle of Manhattan is the challenge Amtrak has handed to a group of companies led by Arup, an engineering and design firm.

“Already, the station has been operating at a level of intensity far beyond the level that it was designed to support,” said Stephen J. Gardner, the chief executive of Amtrak. He added, “We’re going to double the width of the pipe, but Penn Station, as the bucket that receives the water from the pipe, is already full.”

Any disruption to service at Penn would be at least a few years off, when construction of the expansion would begin. Gateway is not expected to be completed for another decade.

As for the state’s renovation project, it will be the focus of a hearing in Manhattan on Friday, at which state lawmakers will take testimony from state officials, supporters and opponents of Gov. Kathy Hochul’s plan to fund an overhaul of the station by letting developers fill the neighborhood around it with office towers and other tall buildings. The state would use payments from those developers to cover its share of the $7 billion cost of improving the station.

The renovation is aimed at replacing Penn Station’s warren of cramped corridors that Ms. Hochul called a “hellhole” with a spacious, sunlit train hall that she said would “lift the human spirit.” But community leaders have questioned whether the scheme to have commercial developers pay for the renovation as well as the subsequent expansion of the station is feasible.

Under the Hochul plan, the towers surrounding the station would largely consist of office space, demand for which has declined sharply during the pandemic. The towers would be built over the next 20 to 30 years.

A report issued last month by the city’s Independent Budget Office concluded that the state had provided too little information about the funding plan to determine whether it is viable, or if taxpayers might be saddled with some of the costs. Those questions spurred three state senators from the city — Liz Krueger, Leroy Comrie and Luis R. Sepulveda — to convene Friday’s oversight hearing. Ms. Krueger and Mr. Comrie were among a group of 15 senators who sent a letter to state officials in March, demanding that they “pause the Penn Station plan until these answers have been provided.”

But Ms. Hochul instead has pressed for an acceleration of the station’s renovation. Last week, she announced the release of a request for proposals for the redesign, even though that project had been scheduled to follow the Amtrak expansion of the station.

Mr. Gardner and Tony Coscia, Amtrak’s chairman, said the designers of the expansion would consider a range of alternatives, including adding tracks to the south of Penn Station, beneath the block of West 30th Street that is the longtime home of St. John the Baptist Roman Catholic Church. “That’s one that Amtrak has long discussed and we believe is feasible,” Mr. Gardner said.

The National Trust for Historic Preservation said it strongly opposed the plan to “demolish several city blocks” around Penn Station because they contained several structures, including the church, that either already were on the National Register of Historic Places or were eligible to be placed on it.

Coordinating the various pieces of Gateway and plans for Penn Station is complicated by the number of agencies involved. Amtrak owns most of the infrastructure, but the biggest users of Penn Station are the Long Island Rail Road and NJ Transit. The L.I.R.R. plans to start diverting some of its service to Grand Central Terminal later this year; a few years later, another New York commuter service, the Metro-North Railroad, plans to start running some trains to and from Penn.

Amtrak is taking the lead, in partnership with NJ Transit, on planning the expansion. The Metropolitan Transportation Authority, which operates the L.I.R.R. and Metro-North, is overseeing the renovation.

“There are just so many cooks in the kitchen and so many questions unanswered,” said Layla Law-Gisiko, the chairwoman of the land use committee of Community Board 5 and a critic of Governor Hochul’s plan.

Amtrak officials hope to head off the sort of community opposition that could derail the expansion plan. “We’ve got to absolutely, fully air and communicate all of the different options,” Mr. Gardner said, “to get an outcome that works for the community.”