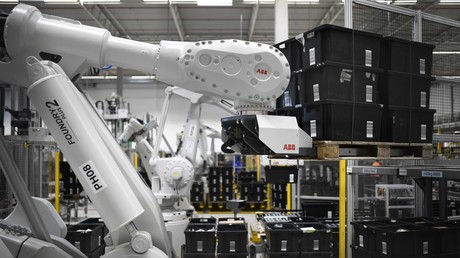 Amazon has unleashed its “first fully autonomous mobile robot” on warehouse floors, the company announced on Wednesday at its re:MARS event in Las Vegas.

Called Proteus, the new bot reportedly uses “advanced safety, perception and navigation technology developed by Amazon” to move smoothly among and around its human colleagues.

Proteus will start work lifting and moving GoCarts, the human-driven wheeled transports that move packages through Amazon warehouses, in the outbound areas of fulfillment and sorting centers. The company hopes to automate the handling of GoCarts, supposedly freeing human employees from the drudgery of lifting heavy objects so they can “focus on more rewarding work.”

Amazon-produced video of the Proteus shows a rounded, low-to-the-ground dolly platform armed with various colors of flashing lights and a powerful yet seemingly gentle (the video is silent) lift mechanism. When a person steps in front of the robot, it stops moving until they begin walking away.

Proteus is designed to avoid existing pitfalls of autonomous robot design, according to Amazon Robotics chief technologist Tye Brady, who explained the bot would “very slowly make its way through [a] crowd of people, very slowly, very intentionally” instead of freezing up when it encounters a cluster of humans like some robots do.

In a flattering overview of “10 years of Amazon robotics” the company admitted that it has historically been “difficult to safely incorporate robotics into the same physical space as people.”

In one particular instance 24 Amazon employees were hospitalized back in 2018, when a robotic co-worker at their Robbinsville, New Jersey warehouse accidentally tore open a can of bear mace and sprayed them with the contents.

The company subsequently outfitted its human workers with “Robotic Tech Vests,” designed with sensors that work with robots’ obstacle detection features to warn the machines to steer clear of stray humans. However, a recent viral video appeared to show sets of robotic shelves attempting to “trap” an employee on the warehouse floor, and flesh-and-blood employees have long complained about the inhuman pace set by their machine colleagues.

Amazon insists there is no intention of replacing human workers with robots, autonomous or otherwise.

“Replacing people with machines is just a fallacy,” Brady told Forbes on Wednesday, arguing companies with such a “replacement philosophy” would “probably end up out of business.”

Proteus was not the only robot introduced at Amazon’s conference. Another device called Cardinal, with a robotic arm capable of lifting up to 50 pounds, is designed to sort packages earlier in the shipping process. Meanwhile, the Amazon Robotics Identification system eliminates the need for handheld scanners by allowing workers to input packages with “natural movements” using an ultra-fast camera, and the Containerized Storage System retrieves packages for employees.