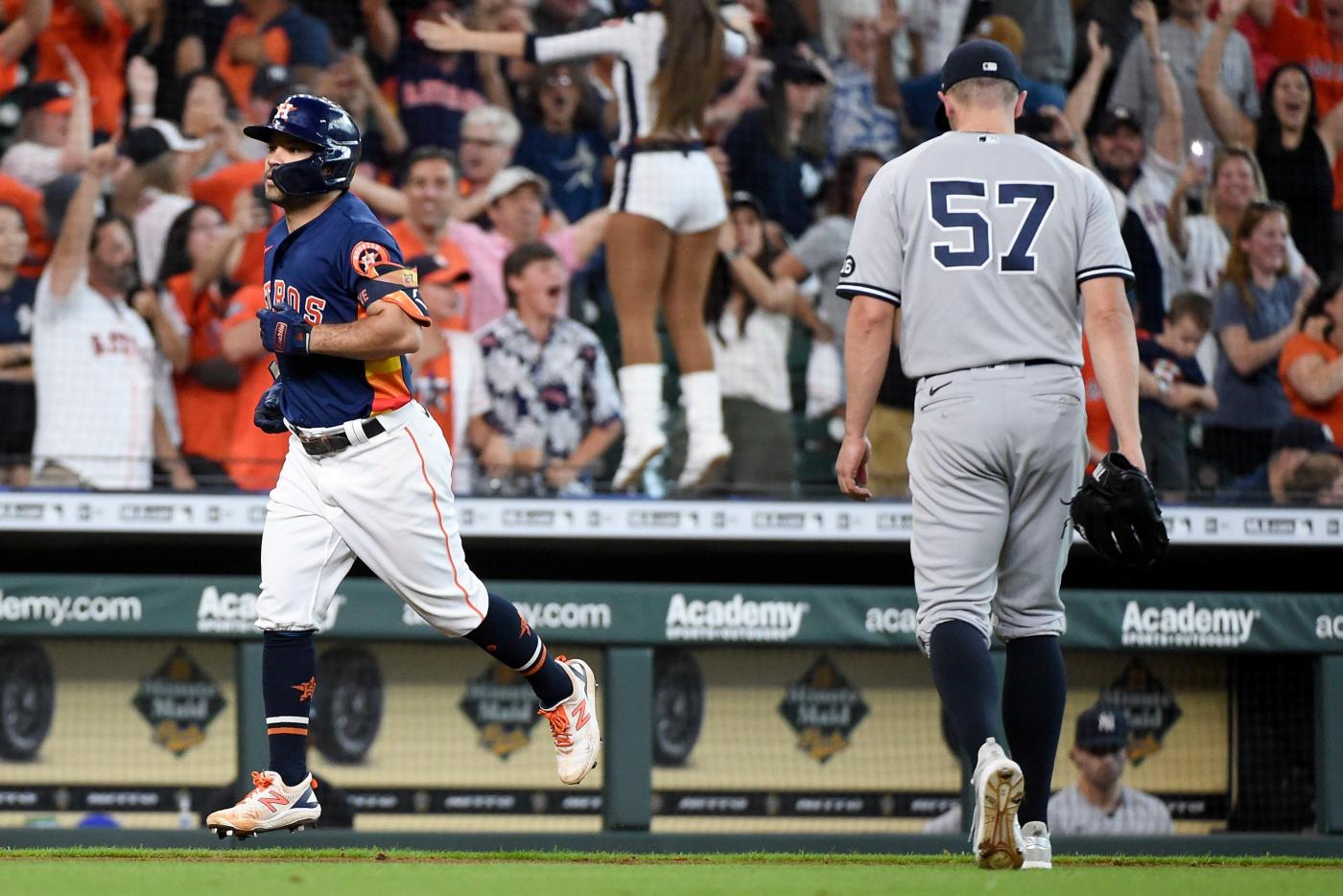 ST. PETERSBURG — It could be a preview for October. This weekend the Astros come to the Bronx with the second-best record in the American League and a whole lot of bad blood. Obviously, Yankees fans — and some in the organization — are still peeved about 2017. The Bombers feel the Astros’ cheating system robbed them of a World Series appearance that year and Aaron Judge of a Most Valuable Player award.

Last season, the Astros visited the Bronx early in the season, before the COVID pandemic regulations on large gatherings were relaxed. They got an intense reaction, but not the full force of the Bleacher Creatures and the Bronx best.

“I hope it’s civil and people are behaving,” Yankees manager Aaron Boone said before Wednesday’s series finale against the Rays at Tropicana Field. “But there’s no question anytime we get together, and it’s gonna be over a weekend during the summer months, it’s going to be intense.

“But hopefully good, clean, civil, fun for the crowds.”

At this point of the season, the Yankees have the best record in baseball and an 11 1/2 game lead in the division while the Astros lead the AL West by 10 1/2 games. Fans can be excused if they look past the divisional races and think about the Bombers and Houston clashing in October.

Boone and the Yankees, however, cannot.

“I mean, I hope it remains boring, for that matter,” Boone said of the division race right now. “Honestly, you don’t get that caught up in it. I mean, we love going home and playing [at] Yankee Stadium against another great team. And, obviously, a team that we’ve had a rivalry with. So I think you appreciate being involved in series like that, games like that. …

The Astros were using a system to steal opposing pitchers’ signs from video replay and relaying in real time the pitch that was coming to hitters. The team, general manager and manager were punished for it, but the players were given immunity. That has created a lot of ill will among other fan bases and teams.

Domingo German was scheduled to begin his rehab assignment with Low-A Tampa Tarpons on Wednesday night. The right-hander, who began the season on the injured list with right shoulder impingement syndrome, said that he expects to throw about 55 pitches in his first start and work from there.

Boone said that they are waiting to see how he comes through the start before they progress with his plan.

“No, nothing yet. This is a big one, obviously, starting a rehab assignment and getting in a real game,” Boone said. “And hopefully that goes well. Then we’ll move on from there.”

The clock on his rehab starts with his Wednesday outing, meaning he should be back in the big leagues within the next 30 days. That could be a big help for the Yankees, who are not just concerned about the workload of starters Luis Severino and Nestor Cortes, but also of relievers Clay Holmes and Michael King. Severino and Cortes have had very limited innings in the last few years and King and Holmes are among the 12 most used relievers in the big leagues right now.

German can do both.

The 29-year-old made 18 starts for the Yankees last season and has also been a bulk reliever in the past.

“Throughout my career, I guess I’ve had a mixed role,” German said through Yankees interpreter Marlon Abreu. “I’ve been a starter and I’ve come out of the bullpen. I think it actually has helped me because he has given me that experience to do both. So, wherever the team needs me, I’m more than happy to find a way to help.”

The Yankees are also expecting to have right-handed reliever Albert Abreu, who they claimed off waivers on Tuesday, in the bullpen on Thursday night.