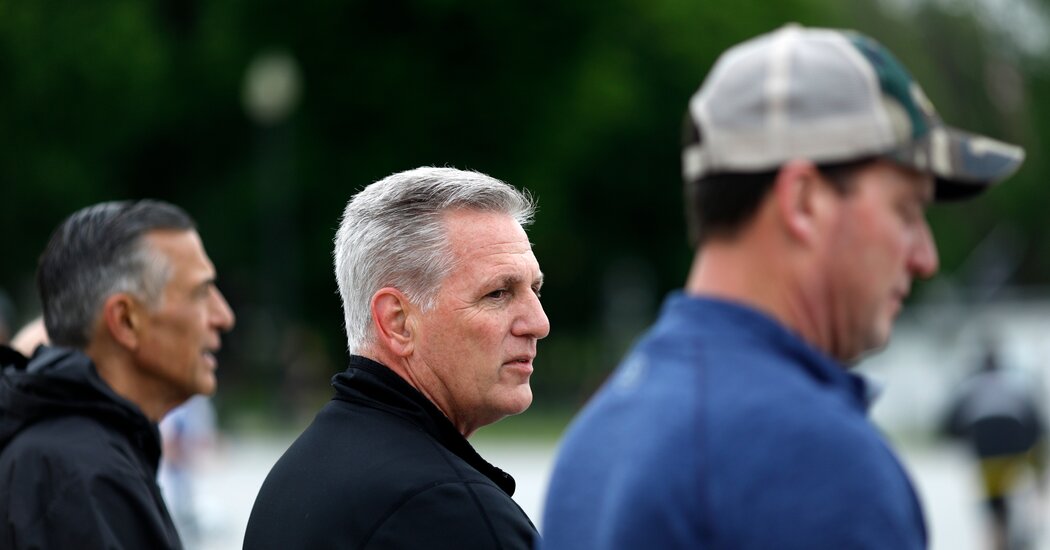 WASHINGTON — The four hearings held in the past few weeks by the House committee investigating the Jan. 6 attack, with their clear, uninterrupted narratives about President Donald J. Trump’s effort to undercut the peaceful transfer of power, have left some pro-Trump Republicans wringing their hands with regret about a decision made nearly a year ago.

Representative Kevin McCarthy of California, the minority leader, chose last summer to withdraw all of his nominees to the committee — amid a dispute with Speaker Nancy Pelosi over her rejection of his first two choices — a turning point that left the nine-member investigative committee without a single ally of Mr. Trump.

Mostly in private, Republicans loyal to Mr. Trump have complained for months that they have no insight into the inner workings of the committee as it has issued dozens of subpoenas and conducted interviews behind closed doors with hundreds of witnesses.

But the public display this month of what the panel has learned — including damning evidence against Mr. Trump and his allies — left some Republicans wishing more vocally that Mr. Trump had strong defenders on the panel to try to counter the evidence its investigators dig up.

“Would it have made for a totally different debate? Absolutely,” said Representative Brian Mast, Republican of Florida. “I would have defended the hell out of him.”

Among those second-guessing Mr. McCarthy’s choice has been Mr. Trump.

“Unfortunately, a bad decision was made,” Mr. Trump told the conservative radio host Wayne Allyn Root this week. He added: “It was a bad decision not to have representation on that committee. That was a very, very foolish decision.”

The committee employed more than a dozen former federal prosecutors to investigate the actions of Mr. Trump and his allies in the buildup to the Jan. 6, 2021, attack on the Capitol.

With former television producers on staff, the committee has built a narrative told in chapters about the former president’s attempts to cling to power.

As it has done so, the committee has not had to contend with speechifying from the dais about Mr. Trump’s conservative policy achievements. There has been no cross-examination of the panel’s witnesses. No derailing of the hearings with criticism of President Biden. No steering the investigation away from the former president. Ultimately, there has been no defense of Mr. Trump at all.

The committee presented considerable evidence this month of Mr. Trump’s role, laying out how the former president pressured Vice President Mike Pence to go along with a plan to unilaterally overturn his election defeat even after he was told it was illegal.

On Tuesday, the panel directly tied Mr. Trump to a scheme to put forward fake slates of pro-Trump electors and presented fresh details of how the former president sought to bully, cajole and bluff his way into invalidating his 2020 defeat in states around the country.

The effectiveness of the hearings in putting Mr. Trump at the heart of the effort to overturn the election results has drawn the attention of, among others, Mr. Trump. He has made plain this week that he wants more Republicans defending him, and is displeased as the hearings play out on national television without pro-Trump voices.

The only Republicans on the committee are two who have lined up squarely against Mr. Trump: Representative Liz Cheney of Wyoming and Representative Adam Kinzinger of Illinois. They were appointed by Ms. Pelosi, not Mr. McCarthy.

Mr. McCarthy figured in July that it was better politically to bash the committee from the sidelines rather than appoint members of his party acceptable to Ms. Pelosi. He has said he had to take a stand after she rejected two of his top picks for the panel: Representatives Jim Banks of Indiana and Jim Jordan of Ohio.

Ms. Pelosi said she could not allow the pair to take part, based on their actions around the riot and comments they had made undercutting the investigation. (Mr. Jordan has subsequently been issued a subpoena by the committee because of his close dealings with Mr. Trump.) The speaker’s decision led directly to Mr. McCarthy’s announcement that Republicans would boycott the panel.

“When Pelosi wrongfully didn’t allow them, we should’ve picked other people,” Mr. Trump said in an interview with Punchbowl News. “We have a lot of good people in the Republican Party.”

Mr. Trump has grumbled openly about the makeup of the panel, according to a person familiar with his remarks. Some members of the far-right House Freedom Caucus have also privately complained about the lack of pro-Trump Republicans on the panel, the person said.

Those close to Mr. McCarthy argue that the Democrats who control the committee would most likely not have allowed his nominees much power or influence over the panel’s work.

The hearings will pick up again on Thursday with a session devoted to Mr. Trump’s effort to install a loyalist at the top of the Justice Department to carry out his demands for more investigations into baseless claims of election fraud.

The panel is planning at least two more hearings for July, according to its chairman, Representative Bennie Thompson, Democrat of Mississippi. Those hearings are expected to detail how a mob of violent extremists attacked the Capitol and how Mr. Trump did nothing to call off the violence for more than three hours.

Asked on Tuesday about the former president’s comments about the Jan. 6 committee, Mr. McCarthy instead talked about inflation and gas prices.

“They focused on an issue the public is not focused on,” he said of the committee. Mr. McCarthy added that he spoke with Mr. Trump this week.

One of the Republicans whose nomination Mr. McCarthy withdrew from the committee, Representative Kelly Armstrong of North Dakota, was a defense lawyer before being elected to Congress.

Ms. Pelosi had approved of Mr. Armstrong serving on the panel, along with Representative Rodney Davis of Illinois and Representative Troy Nehls of Texas.

Mr. Armstrong said he had watched the hearings as the committee laid out evidence in a “choreographed, well-scripted way.”

Had he been allowed to serve on the committee, he would have tried to steer the investigation and its questions at public hearings into security failures at the Capitol, he said, echoing a line of criticism that many Republicans have tried to direct at Ms. Pelosi.

“It would be a lot less scripted. We’d ask questions,” Mr. Armstrong said. “There are real questions to be answered. My heart goes out to the law enforcement officials. They needed more people down there.”

Still, he said, he stands by the decision made by Mr. McCarthy, who is considered the leading candidate to become speaker if Republicans win control of the House in the midterm elections in November.

“I was in the room when we made that decision, and I still think it was the right decision,” he said, arguing that House Republicans had to take a stand after Ms. Pelosi removed Mr. Jordan and Mr. Banks. “I think it was the only option.”

Mr. Trump’s comments have sparked much discussion among House Republicans over whether it was the right decision.

“Everybody’s got a different opinion on that,” said Representative Tom Cole, Republican of Oklahoma. “Personally, I think the leader made the right call. The minute the speaker decides who the Republican members are, it turned against the legitimacy of it.”

Representative Daniel Crenshaw, Republican of Texas, said would have preferred to see an exchange of opposing views on the panel. “Let the public see how that debate goes,” he said. “That would have been better, of course.”

That commission would have had to finish its work last year. Instead, Mr. Trump’s miscalculation led to the creation of the House Jan. 6 committee, which is continuing to investigate him, Mr. Upton said.